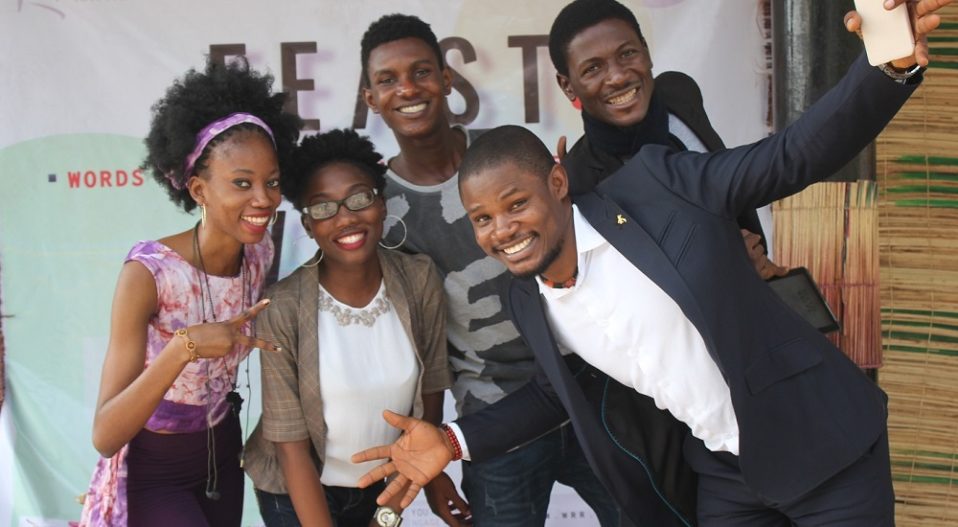 The Words Rhymes & Rhythm (WRR) Literary festival – Feast of Words (FOW) 2017 has come and gone. Every year, as December draws close, I question myself to find justification for the huge expenditure that the Feast of Words would demand of my pocket. After a few questions and stock taking, I convince myself that it is a worthy cause and I go ahead to get it done, with the support of my people. Believe me, every single year; the festival justifies our decision to hold it. FOW 2017 is no different.

The 2017 edition of FOW almost didn’t hold, which is the reason for the rush-hour organization we had. I had a lot of plans for Words Rhymes & Rhythm, and all required funding. Chief of these plans was to have a permanent office in Ibadan. I also wanted to start developing the land bought in Ibadan for the future headquarters of WRR – a hub for young writers all over the country. I chose to hold the festival first, before turning to these other equally important projects, but obviously more financially more demanding.

So, by mid-October we had decided to hold the Festival. Plans went underway immediately. The budget was crazy. Everything was more expensive: the DJ wanted N20,000 more than what he took last year, graphic designs and printing estimates were astronomical and the caterers contacted assumed we had a wedding budget. But the major headache was the venue. To cut a long story short, we paid for a venue only the day before the festival, despite the frantic efforts made over weeks to get one early enough. Thanks to the goodwill of WRR as a company and the tenacity of WRR COO, Kolade Olanrewaju Freedom, everything fell in place in the nick of time – though getting the hall late meant another N45,000 addition to the already huge budget.

Funding the annual Brigitte Poirson Poetry Contest anthology was also an issue, considering that the sponsor, Brigitte Poirson, had just recently lost her husband and was still in mourning. I had made up my mind to publish an electronic edition before Poirson and her daughter Claire Po made magic happen against all odds. They made some funds available and I got the balance to make it happen. Everyone can testify that THE TRAIN STOPS AT SUNSET is the best BPPC anthology ever. No wonder copies of the books disappeared like air at the feast. People just couldn’t have enough.

All in all, good things happened to make this year’s FOW magical. Good people – more than I can thank individually – came through to make things work. I don’t even know who to thank.

Mr. Eriata was on-time in making the prize money for the EOPP 2017 available, in addition to sponsoring a number of hotel rooms for the festival guests. Ladi Adofikwu, the CEO of JustYou.ng, a fashion outfit based in Abuja, provided all the snacks served in the afternoon and morning sessions, leaving us with only drinks to provide. So if you ate peanuts, small chops and the deliciously crunchy chin chin, you know who to thank. Then there is the indefatigable trio of WRR COO, Kolade Olanrewaju Freedom – Makinde Damilola and Kalejaiye Folajimi who both executed the roles of entertainer and caterer rolled into one. Kolade made things happen in Ibadan while I was in Abuja, Damilola ensured that the refreshment (eko, akara, fish and palmwine) at the African Night came, albeit a tad behind schedule, and still gave the two most amazing performances of the entire FOW while Folajimi ensured that cold drinks were available and still gave a traditional poetry rendition that left the audience spellbound – without being payment! I cannot ignore the contributions of our hosts Mi Ci Bliss Akinyemi and Adelaja Ridwan, the official photographer Adedayo Agarau; and the book attendants Kafayat LKG and Moses Opara.

At this point, I would want to add that the entire WRR team is grateful to all the authors that published with our company in the year 2017. You may ask why. Well, the simple truth is that the proceeds from your patronage formed a part of the budget for this year’s festival, especially in sponsoring the Albert Jungers Poetry Prize 2017. As a general principle, we use all the proceeds from our publishing business to fund our various initiatives, awards and the annual festival. Keep doing business with us.

Above all, my gratitude goes to all the young and not-so-young lovers of literature (like ace journalist Michael Oluwashogo Olatunbosun) that left their various destinations and engagements to be present at the FOW 2017. I also appreciate those that could not make it but reached out to encourage and support. You are the ones that give us the drive to go on. You are the real MVPs!

Together, we did it!