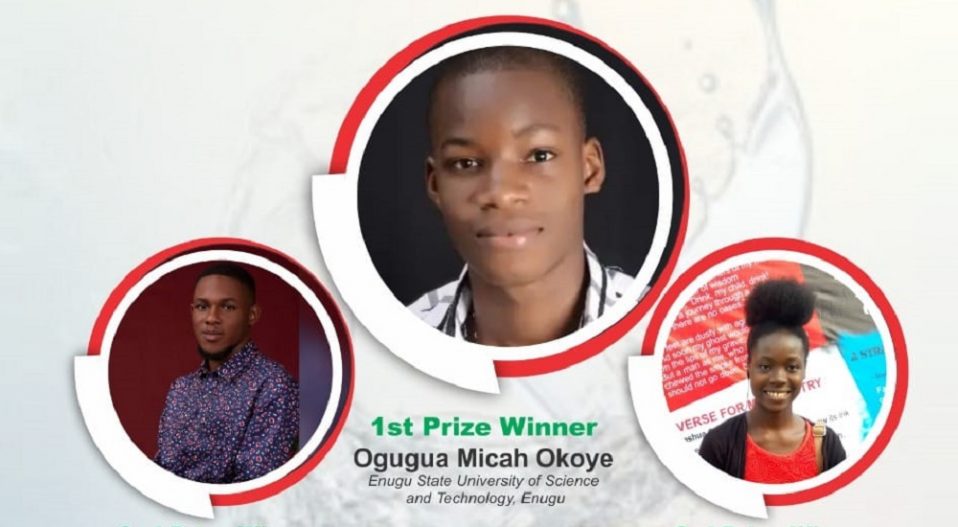 Ogugua Micah Okoye, Okpara Ugochukwu Damian and Ehi-Kowochio Ogwiji are the winners of the fourth edition of the Nigerian Students Poetry Prize, NSPP 2019.

“As a judge, I was looking for language, for charge and was willing to accommodate at the barest level “familiar excellence”. Echoes of voices here and there. I was looking for a further brilliance within that familiar excellence. I was prepared to be shocked, an aesthetic turn that had something of a kick in it, a turn, a loop, a leap from the familiar into the unmapped, a blast of light from the writer’s heart into mine. I found that,” remarked Adesina.

The prize winners have been awarded a total cash prize of N300,000 while the consolation prize winners for 4th and 5th placed entrants, Anuoluwa Olusegun Soneye from Obafemi Awolowo University, Ile Ife and Ibelachi Franklyn Chinedu from Chukwuemeka Odumegwu Ojukwu, Uli will receive N20,000 each.

As sponsors of the NSPP 2019 Awards, Niger Delta University was also awarded a trophy recognizing their immense contributions to the success of the Prize.

NSPP was instituted in 2016 to stimulate literary creativity and promote literary excellence among Nigerian students. Noah Oladele from Obafemi Awolowo University, Ile-Ife, Bakre Fadil Adedamola from University of Ibadan and Godstime Iberiyenari Tamunofiri from Niger Delta University won the 2016, 2017 and 2018 editions of the Prize respectively.