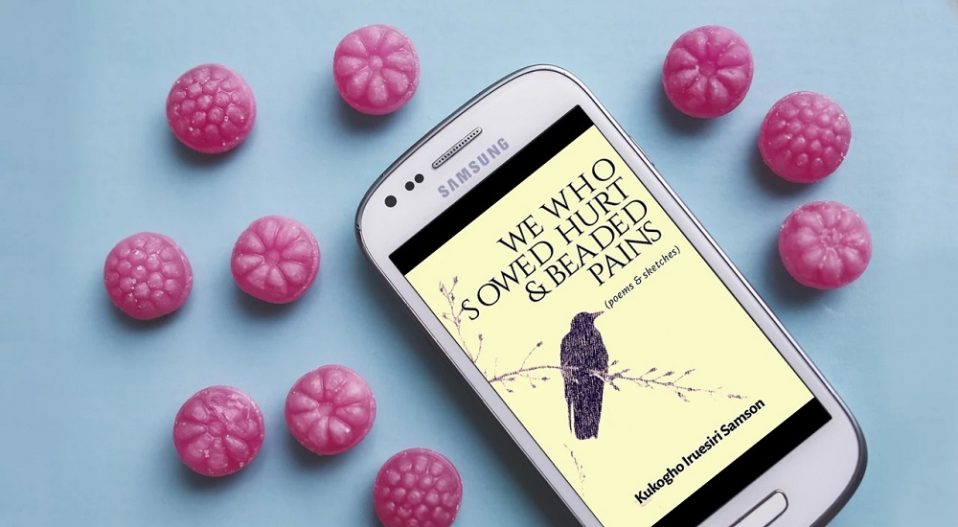 Kukogho Iruesiri Samson poetry collection WE WHO SOWED HURT AND BEADED PAINS is a genius argument for suicide and mirrors the emotions of those who travel that path.

Kukogho Iruesiri Samson poetry collection WE WHO SOWED HURT AND BEADED PAINS is a genius argument for suicide and mirrors the emotions of those who travel that path.

The collection couldn’t have opened with a more befitting title than “metamorphosis” as Kukogho lays the naked truth that suicide doesn’t begin as an inferno but tiny sparks that breed from clashing and conflicting thoughts. When the withdrawal symptoms manifest, family and friends often excuse it as either mood swings or “growing up” until the sparks metamorphose into an inferno that swallows the victim whole and we call it “suicide.”

This carefully curated collection conveys the emotions of the victims. Yes, Kukogho argues that they are victims, no less than we are too, of the pains. He challenges popular opinions on the sordid matter skilfully giving the POV of the victims.

“3rd Mainland Bridge” tells the emotions of the ancient bridge, the lagoon and the bodies it has buried. None of them wanted to be ridden upon, paddled upon and ignored. You could literally feel the pains of everyone that the waters have seduced at some points in their lives, maybe you even remember yours too.

My personal favorites would be first “I am looking for my childhood,” partly because KIS played the chemistry card well (and a poem that reeks of Chemistry innuendos taste better in my tongue), as the words evaporated and precipitated as tear drops to spell out the hurt. The second would easily be “envy me not”. This particular poem spoke to me and for me “because I wear a smile and my face bears no tears”. “People never understands” that “a man and himself” bears his cross through the “high and low” and “sometimes” stares at “blank skies” and could only wish of “going back to yesterday.”

The seriousness of the subject matter couldn’t have found better expression than in the seamlessly and skilfully flow of metaphors, rhythm, and rhymes where needed. It is enough evidence that Kukogho knows how to weave the right letters to evoke the kind of emotions he wishes through the words they become.

If you’re yet to read this please download it and it will bless you…At the end of this tunnel, there is a light to be found, this much I can assure.

Kingsley Dominic is a graduate of chemistry from the Benue State University, Makurdi. He started writing from secondary where he won a number of essay writing and story writing competitions. He wrote his first poetry in 2015 as a response to a challenge that he could not do well in poetry. His poem ON A STORMY SHORE won the Brigitte Poirson Poetry Contest (BPPC) for August 2018 and was shortlisted for the Albert Jungers Poetry Prize (AJPP) for the same year. He contributes political articles to ajispeaks.com.