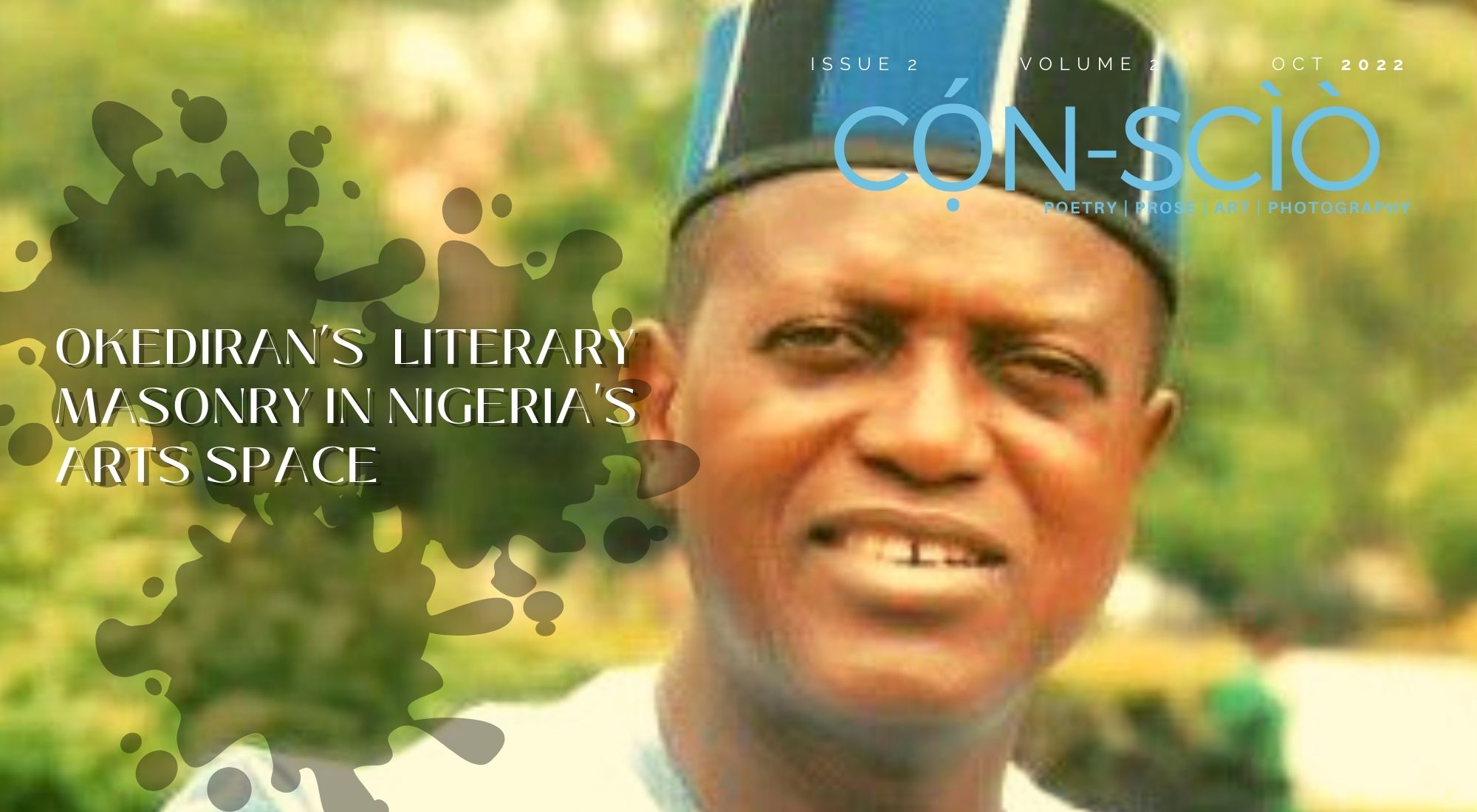 It is easier for people to hold on and keep on giving their all when they know they have an army of supporters solidly behind them. Through the Ebedi Residency, which has become a comfortable home for many Nigerian writers, Okediran contributes his quota to the growth of “the community” he advocates for.

Wale Okediran is a medical doctor, award-winning writer, arts administrator, and politician. Okedian was the National President of the Association of Nigerian Authors (ANA) from 2006 to 2009 and is currently the Secretary-General of the Pan African Writers Association. He served as a Member of the Nigerian Federal House of Representatives from 2003 to 2007 and has consulted for several global and local development organizations. A former president of the Association of Nigerian Authors (ANA), he is the founder of the first writers’ residency in Nigeria, the Ebedi International Writers Residency in Iseyin, Oyo State, an initiative that is building and motivating writers across Africa, and the convener of the Read Across Nigeria (RAN) project. His laurels include an ANA Prize for Fiction and the 2010 Wole Soyinka Prize for African Literature, jointly won with South Africa’s Kopano Matlwa. Dr Okediran has authored fourteen novels, one of which is the highly acclaimed novel Tenants of the House, a fictional account of his time as a member of the House of Representatives. This profile by Ijeoma Ntada for CỌ́N-SCÌÒ Magazine’s special edition examines Okediran’s unmatched contributions to Nigerian literature as a writer and arts administrator.

The young Okediran was greatly interested in both the humanities and sciences from a young age. He was fascinated by films and galleries as much as he was fascinated by physics experiments and the wonders of chemistry. This love of two contrasting disciplines made it difficult for him to decide where to major. Then he found out he didn’t have to throw away one for the other and decided to do both.

Despite being a multidisciplinary student, it was the humanities that were his forte. But following his father’s advice to pursue a medical career, he moved on to study Medicine and Surgery at the University of Ife, now known as Obafemi Awolowo University. Dr Okediran enjoyed his time in medical school, and he trained to become a good doctor. As a doctor, he wasn’t interested in specialising in any field and eventually became a general practitioner. He began his medical practice at the University Teaching Hospital, Ibadan. From there, he moved to an orthopaedic hospital in Lagos. After some time, he embraced self-practice wholly and excelled at it. He worked mostly as a consultant. Dr Okediran is presently a Fellow of the General Medical Practitioners of Nigeria as well as a Fellow of the Public Health Physicians of Nigeria. He also writes a weekly health column for The

The stress and naturally busy nature of medical practice did not hinder Dr Okediran from writing. Somehow, he devised a way to navigate them both. In fact, he is, even more, dedicated to his work today than ever before. Dr Okediran’s journey and career in writing are very interesting, as he didn’t set out to write prose at the beginning of his writing journey. “I started writing poems first, but as time passed, I desired to try something different. I started writing prose because poetry was a limitation to me, and I didn’t like to be limited by anything at all. The prose was an escape from the limitations poetry made me feel.”

Dr Okediran has published many works, from his detailed medical essays to his books. He has written many books and explored a lot of important topics. At the moment, he has published fourteen books, two children’s books, two collections of short stories, and two collections of travel stories. He is inspired by everyday life and the sheer beauty of human behaviour and existence. He finds meaning in things that others may overlook or consider mundane. From the random conversations, he has with Uber drivers to the things he sees in the course of meeting new people and travelling “When I find a thing worthy of writing about, I try to write about it in the most glaring way.” The truth and relatability of his writing are two things that stand out about them.

A while ago, I stumbled on a movie on Netflix, The Tenant of The House, which was directed by Nigerian filmmaker Kunle Afolayan. The film was an adaptation of Dr Okediran’s book, Tenants of the House: A Fictional Account of the Nigerian Parliament.  When Dr Okediran speaks about this book, he does so with great gusto. This book, which explores the underground happenings of the Nigerian political space in a very interesting way, was inspired by the time he served as a member of the Nigerian Federal House of Representatives from 2003 to 2007. The book was published in 2009.

“The four years I served as a member of the Nigerian Federal House of Representatives taught me so much. It helped me improve in my field as a healthcare professional. I also got to travel to the thirty states of Nigeria and meet new people and make new friends along the way.”

Being a member of the House of Representatives opened great doors in Dr Okediran’s medical career. He also used his position to advocate for improvement in the Nigerian healthcare sector and that of Africa as a whole. He has worked as a consultant with foreign and local bodies like UNICEF, UNAIDS, the Health Reform Foundation of Nigeria, USIS, the National Democratic Institute for International Affairs, and a host of others.

Dr Okediran is currently the secretary-general of the Pan African Writers Association (PAWA) and he remains passionate about raising a generation of writers from Africa whose works speak loudly and leave beautiful legacies. This is part of what inspired him to start the popular Ebedi International Residency in Iseyin, Oyo State, in 2010. Okediran recounts how he often had to “get away” from his immediate environment at certain points to focus on his writing. He then decided to start the Ebedi International Residency. This is where other writers could come to escape the routine of their usual existence and focus on consuming and producing brilliant literature. The residency has grown in leaps and bounds since its inception, and Dr Okediran incorporates fun activities like group readings and excursions for the residents to take part in. That way, they are able to arouse their creativity to the fullest and make something beautiful out of it. The spontaneity, freedom, and creative space that the residency provides are what make it stand out from every other residency. The residency has been home to many writers, including Romeo Oriogun, Chimezie Chika, Chibuihe-Obi Achimba, T.J Benson, and many others.

Remarkably, about 70% of the writers who get admitted to the Ebedi Residency are young writers. This shows he is intentional about encouraging young writers and ensuring they find their voices and are confident enough to let the world hear them.

In our conversations, Dr Okediran emphasized the need for Nigerian writers to have a “community” where they can read and honestly critique each other’s works and do better. He says writers excel more when they get to work hand in hand with other writers. In a community, writers would know that they are not alone. It is easier for people to hold on and keep on giving their all when they know they have an army of supporters solidly behind them. Through the Ebedi Residency, which has become a comfortable home for many Nigerian writers, he contributes his quota to the growth of “the community” he advocates for.

When asked what the challenges that writers in Nigeria face are, he said, “Do we have more foreign or local publishers? Do people consume a lot of Nigerian literature compared to foreign ones? There is a great need to take these things into consideration. Nigerian writers have come of age. They are putting out high-quality works that can stand shoulder-to-shoulder with others from across the globe. Nigerian writers are doing remarkable things. But it is sad that many of them lack publishing opportunities, which hinders them from bringing their works out. Also, as Nigerians, we should support our own by reading more Nigerian books and helping our writers grow.”

Dr. Okediran deserves commendation for his selfless efforts towards supporting and motivating writers across Nigeria, Africa, and the world at large. Perhaps it is more remarkable that he has achieved this vision of building a community for writers while also creating notable bodies of work. Indeed, he is a pacesetter in the Nigerian literary industry.

Ijeoma Anastasia Ntada writes and reads poetry, fiction and nonfiction. She has published works in the Love Anthology, The Ducor Review, Visual Verse, Praxis Review and other places. Ijeoma is also a photography enthusiast. She takes beautiful photographs and makes them art. When Ijeoma isn’t studying to become a Laboratory Scientist, you’ll find her talking about Afro Hair, femininity, and embracing all of her girlhood. She also writes for Afrocritik.

Next post AN ODE TO THE SON OF THE SOIL: A TRIBUTE TO CHINUA ACHEBE | a poem by Chidera Udochukwu