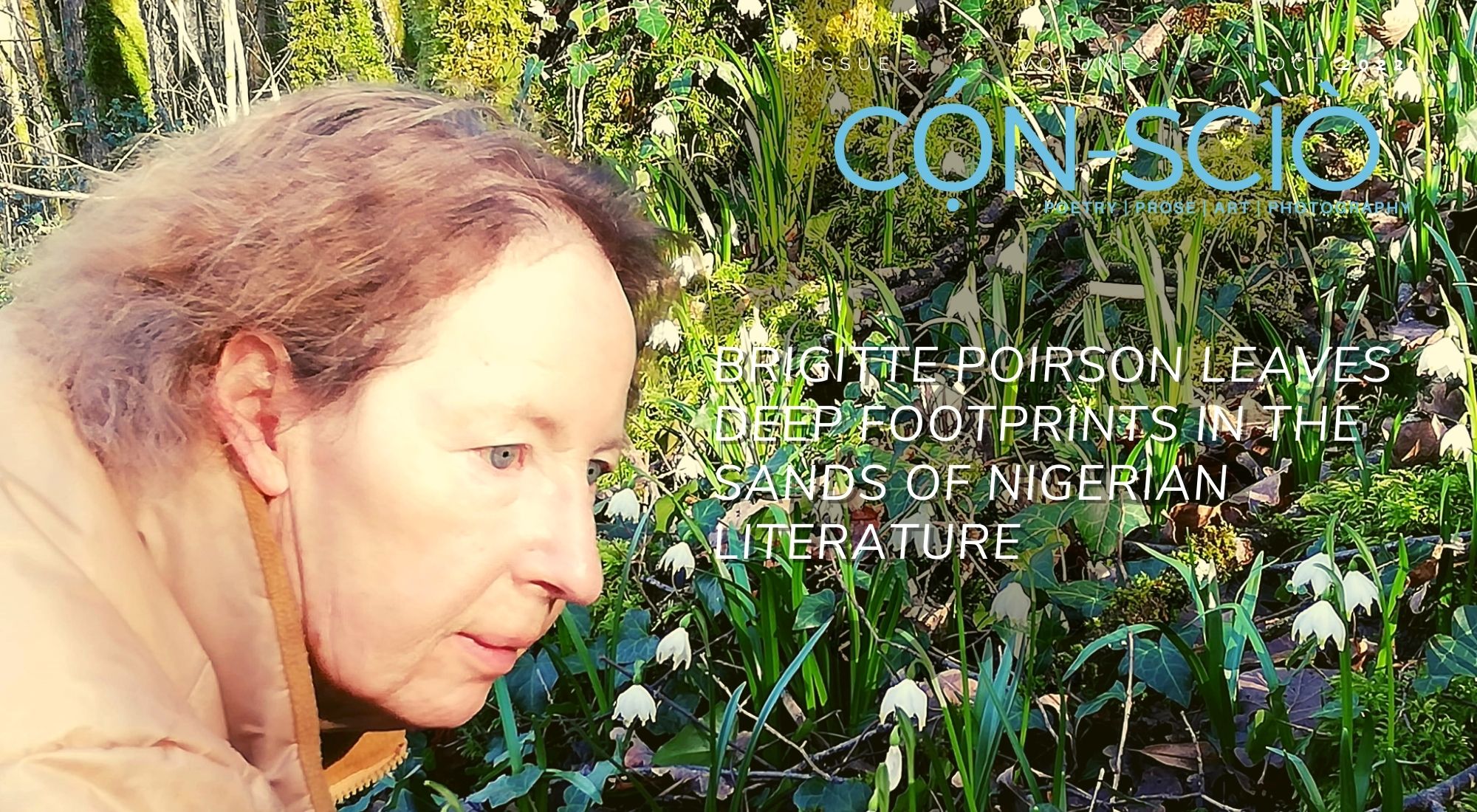 Having had her imagination shaped from a young age by African stories, Brigitte Poirson has contributed immensely to the shaping of literature in the country in over a decade of active support. Her mark on Nigerian literature will remain indelible for generations to come.

Brigitte Poirson is a French poet, editor, educationist and literary promoter who has over the years worked assiduously to support African poetry in various capacities. Brigitte has taught languages ​​in high schools and universities in France and England. She has authored eight books: La Nouvelle Vouivre, 1977; Étamine des Jours, 1978; In Worms and Against All, 1979; The Passion Fruits, 1984; Poems from the Free County, 1995; The Ten-Year-War, 1996; Jurassically Yours, 2009; Clair – Obscur Encounters: A Poetic Duet Leading to Self – Discovery, 2015 (co-authored with T. Haynes); Surviving CORONAtion Street, 2018; and edited or co-edited more than twenty publications, including the BPPC Anthologies. She has also contributed to numerous anthologies and magazines, has won many awards and has been a member of the Société des Gens de Lettres de France. She currently devotes time to promoting African literature and is a patron of the Brigitte Poirson Poetry Contest (BPPC) and the Albert Jungers Poetry Prize (AJPP) two prestigious literary prizes rewarding young poetry talents in Nigeria. In France, she regularly organises small literary workshops with young poets. In this profile by Michael Chiedoziem Chukwudera for CỌ́N-SCÌÒ Magazine’s special edition, we take a look at her history and immense contributions to the Nigerian Literary Arts space.

As a child, African and Indian bedtime stories became for Brigitte Poirson, a vehicle to travel the world. Her father would read her the stories and she would marvel at the myths, and the fantastical world they opened up to her. Growing up in Franche-Comte, Eastern France, a place with a chaotic and violent history. The people in the region did not understand much about Africans, but her father was a religious teacher and her uncle was a missionary in Africa.

It is no wonder that she says: “…it felt natural for us to welcome Africans. I would write letters to Children in Benin then, and we even shared visions of our respective countries and the world.” When Brigitte Poirson remembers her childhood, she feels so close to Africa that she remarks, “Sometimes, it feels like I was born in Africa.” This closeness has led her to be very sentimental about African immigrants. “It kills me to see how Europe tends to close its doors to immigrants in these very challenging times. I am torn apart between civilizations,” she says.

Poirson was educated at Dole Ursulines in Franche-Comté, an institution run by catholic nuns. She always remembers her time in the institution with mixed feelings. The nuns who taught her here were benevolent but strict. And while her restrictive environment and pent-up atmosphere served to affect her psyche, acquiring a love for language sent her roaming the world, which counterbalanced the restrictive effects of her education.

The imaginative effects of stories and the instructive effect of Poirson’s education in France served to have a lifelong effect on her; she loved language and its effects as espoused in literature, and she loved the academia and its method of demystifying knowledge. Poirson went on to work as a language teacher in France and England and also travelled around the world while at it. She made efforts to keep in touch with African literature. Of this, not much was known in many of the circles in which she had grown and worked in Europe. She recalls having a hard time searching for Chinua Achebe’s books in a big Waterstones Bookshop in Britain. It was, however, not the high-profile names in Nigerian and African literature which made her really fascinated with literature in the country. She notes: “I got fascinated by Nigerian masterpieces only after enjoying frequent electronic contacts with the younger generation of poets and prose writers.”

Brigitte Poirson’s contact with African writers began with a trip to South Africa. There, she got in touch with Dr L. Nawa and he linked her to some young South African poets on social networks. A decision to federate talents led to the publication of two poetry anthologies. Kukogho Iruesiri Samson was one of the contributors, and they struck a relationship that would lead her into the vast world of budding talents from Nigeria. She became friends with many of them including Ayoola Goodness Olarenwaju, Adedayo Agarau, and their contemporaries. Her love and admiration for these writers led to her becoming an active supporter of their crafts.

She supported Kukogho’s Words, Rhymes & Rhythms (WRR), then a thriving online community that served creatives from all over Africa. Her support started with serving as an instructor in WRR’s Facebook-based College of Poetry, and eventually, the institution of the Brigitte Poirson’s Poetry Contest (BPPC), a themed monthly poetry contest that has rewarded dozens of winners with cash prizes and published over 20 anthologies. The contest and anthologies have given voice to several young writers who would, otherwise, have remained obscure and unpublished. Brigitte—alongside her late husband Patrick Poirson —would also provide moral and financial support for the establishment of WRR’s book publishing venture which provides affordable publishing options for young writers in Nigeria. Brigitte says she enjoys working with Samson because “the teamwork has always been smooth. A real treat.” Through this functional relationship, Brigitte has helped to discover, support and reward many writers, some of whom have attained enviable heights. The impact of her efforts is still yielding fruits as the BPPC continues to be in the business of rewarding, publishing and spotlighting emerging poets from Nigeria.

Brigitte’s participation in the growth of literature in Nigeria has led to a form of kinship between her and the part of the literati she is in contact with: “I have a kind of family relationship with many a Nigerian writer… We keep in close contact as often as possible. Some have even tried to give me an inkling of the functioning of their native language.” One of her recent fascinating experiences in administering the BPPC was coming across the expression, “eff off” and although profanity was not accepted in the contest, she found herself savouring this expression and gulping it down with a smile. Seeing how an expression that could normally be considered profane had been poetically modified greatly pleased her. For this reason, she considers poetry, “…an eye opener to the self and to the benefit of others. It can both take you to many forms of self-discovery and satisfaction and lead to gratifying emotions. No other form of art delves deeper into the human soul than poetry, along with original and forceful associations of words. Not even music, which so aptly expresses our inner emotions. Because poetry grants us the possibility to formulate what is stored inside, and to share it actively by consciously pinning realities.”

Brigitte Poirson knows enough about Nigeria to understand that the country has been troubled for most of its history and more so in recent times. But her positive experience with young Nigerian creatives in the last ten years has left her with a favourable opinion of Nigerians. “I do have a feeling of unity with them beyond physically uncrossable boundaries, since Nigeria here, to my dismay, is considered a “red flag” country…”

Some of the growing trends in the debates in the Nigerian literary scene, like the line being drawn between home-based African writers and those who have experience abroad, have become a course of concern for Poirson. She posits that, if a line is drawn between African writers based on where they are living, then the same could be done along the many other possible divides.

“Then, why not distinguish between ethnic writers, gender writers, and what else?! I personally enjoy Nigerian poetry and prose in all their diversities, whether they are composed by a Yoruba, Hausa, Christian, Muslim, female etc…author. Discriminating between them would mean you treat literary talents in an unfair way. We should simply appreciate talents.”

Grand and impactful as the BPPC has been, Brigitte’s other contributions to the development of literature in Nigeria are no less impressive. Besides supporting the Annual Words Rhymes & Rhythm Festival by sponsoring the publication of the annual BPPC anthology distributed free to attendees of the WRR festival, she co-edits the BPPC anthologies which include Wind of Change (2015), Loops of Hope (2016), The Train Stops at Sunset (2017) and Citadel of Words (2018), Vortices of Verses (2019), A Pandemia of Poetry (2020), and Bridging With Words (2021). She has also served in less visible roles, such as personal mentor, editor—editing several manuscripts including Kukogho’s award-winning novel Devil’s Pawn, and philanthropist, providing financial support to struggling poets and financing the publication of their books. She has also tried —unsuccessfully due to international red tape—to establish a France-Nigeria Literary Arts Residency and exchange programme for young Nigerian writers in partnership with Words Rhymes & Rhythm Publishers because she believes that literature can be used for social reorientation and development.

Brigitte’s contribution to the Nigerian literary scene is undisputed and criminally underappreciated. The relationship she has with young people from the country and her view of them stands out against many of the false stereotypes held about them by the international community. Having had her imagination shaped from a young age by African stories, Brigitte Poirson has contributed immensely to the shaping of literature in the country in over a decade of active support. Her mark on Nigerian literature will remain indelible for generations to come.

Michael Chiedoziem Chukwudera is a freelance writer and editor. His works have appeared and are forthcoming in Jalada Africa, Brittle Paper, Kalahari Review, Republic, Havik, CỌ́N-SCÌÒ, African Writer and elsewhere. Follow him on Twitter @Chukwuderaedozi.