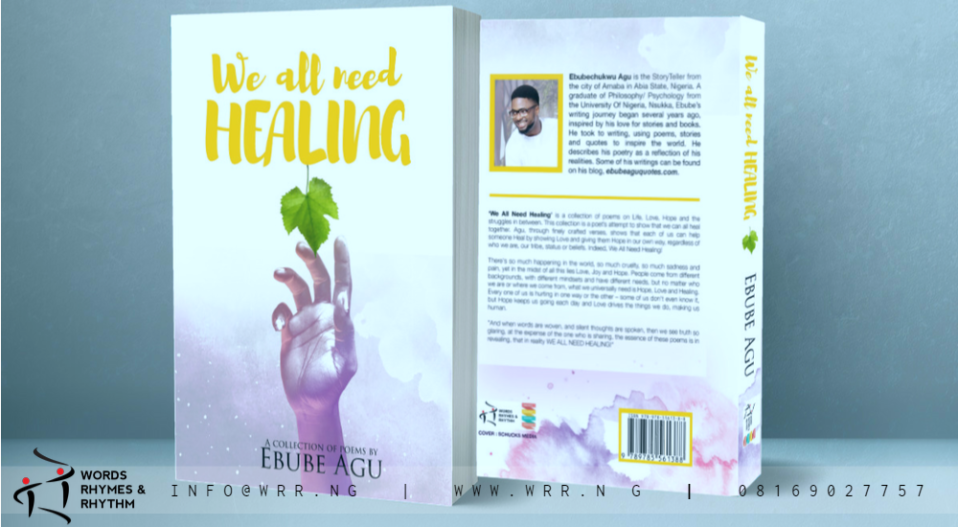 Agu made his debut with a genial collection of warm and emotional poems which are written in clear and unambiguous language so the reader can relate to the verses and derive maximal meaning in the verses.

This collection, We all Need Healing, is devoid of the unnecessary complexity of poetry and incongruous verbosity of words. It may be suffering from clichéd phrases and hackneyed lines but it however is as original as the poet’s spontaneous lines.

In this collection, Agu offers 91 poems, all of them relatable and relevant to all sorts of readers.

His themes rally mostly around love and emotions, humanity, the emptiness of life and religion. And each poem fully appraised to diffuse totally its subject matter. For example, the rhetorical and existentialist poem Facing Reality is questioning the very being of man’s existence, the notion of living and the facade of what we call life.

The poet seeks the meaning of reality or what every one considers real and tries to subvert the originality of life. He asks if reality really exists or it is only a fantasy.  The poet questions the corporeality of reality and instigates that reality overlaps the physical and tangible and covers even the intangibility of nature.

A major trend in poetry is the condensation of words and emotions so much so that words and meanings are clogged and tucked in curt lines. While this may be a laudable feat by poets, no attention is paid to the reader who strains his sight and mind to decipher even the slimmest of meanings in poetry.

Despite the forces  codifying Agu to convention, he bravely cuts loose from convention and upholds the reader as the center of his poetry.

The simple and unitary lines are devoid of overambitious words and crude sentences, this is a collection where even the uncultured readers can read and relate to. The familiar diction, the simple style, the honest and unencumbered verses can be understood by even the most common of reader. Thus, We all Need Healing has a word for all sorts of readers— the avid, the passive and the latent reader.

The eponymous poem We all Need Healing is a moralistic rebuke that calls on all to the originality of true love.  A love that is “… Humble, Forgiving, Selfless and Kind” (15) and a love that “… cannot be fake”. The poet brings himself into the poem to sermonize the reader on all the intricacies and subtlety of love. The reader feels himself in front of the poet as his words touch and poke at his conscience and mind. The reader specially called to “Give in to Love, expel the hate, and then… begin to heal!”

The Poem My Spark is a curt and acute interlacing of words which produces powerful similes and metaphors that symbolizes the poet persona’s lover. For the poet, his unnamed lover is his “… beam in the alley/ [his] spark”, “… smile in the darkness” and his ‘Beauty, completion, Perfection”. The glamorous use of personification in My Spark is remarkable also. For example, the poet a persona believes that “Eternity knows [their] story” and “History speaks of [them]” as “Nature bows to [them]” cause their love defies it. Such strong and keen comparison reverberates in the readers mind and echoes images of the poem long after the collection has been done with.

The poet preaches hope amidst despair in his poem I’d Rather Hope. He believes that “no matter what, there’ll/ always be a way” and he hopes “for sun on a rainy day”.

Despite the accurately appraised themes and the remarkable ideas in the poem, it however lacks most of the literary condiments that makes a poem poetic. The collection, though rightly and thematically theorized, has only sketches of aesthetics and flowery diction that gives poetry the elevated feel of loftiness and sublimity. The rhyme patterns sketchy and blank— mostly end rhymes, the rhythm and pitch isn’t taken into consideration while scribbling which leaves the collection devoid of musicality and tone— most of the poems written in blank verses except for poems like Something New which has an aa/ bb/ aa/cc rhyme scheme and the poem I Will not do It which has an ab/ ab scheme. The poem Twinkle Twinkle and Hills and Valleys have noticeable rhyme schemes also; a beautiful break from the blank ones. The poem Retrospection has acute rhyme schemes and resounding rhythms which the poet personae use to question his decision to let go of his lover in a plaintive mode and dismal tone.

We Need Healing is a promising collection; it weaves meaningful verses which questions the reader— thereby giving him that “we- are- in- this- together” feel, it questions humanity and its virtues, questions nature and life and even question accepted philosophies. A chunk of its theme is set on love and emotions— “love” in the most general and widest notion—- love of God, love of life and romantic love.

This collection could be a relationship bible for its whimsical ideas on romance and love, romantic relationship and the ordeals of broken hearts.

Most probably, the canvass for the poems parallels the poet’s for its vivid images and livable experiences, however the poem makes the subject a general topic which all readers must have at one time faced or lived.

The nuptial poem Marry Me! woos a lady’s heart with the hope of her accepting the persona for who he really is in his imperfections, his ignorance and his weaknesses. The poet persona in a witty manner calls on the lady to not marry his body or his money but his hearth for his “… six packs may not last till sixty/ … strong arm may go weak and weary/ but [his] heart will always be strong and steady”.

Agu’s We all Need Healing questions the very basis of our existence, love, life and believes; it interrogates society demanding answers to often avoided queries and proffers that most likely what seems truthful because everyone believes so isn’t necessarily truth as in the abrupt Poem Parasite, where the poet argues that the very things we rely on, the “dear” things we harbor are things that kill us, things that drain us.

We all Need Healing is a promising collection, a novel effort and a debut publication which introduces the poet into the world of poetry. Rushed and unpolished it may seem, it however shows signs of a bright and colorful artistry with the carefully chosen words and familiar diction.

Agu might not be the best of poets, he however shows unique signs and skills in this collection that will guarantee his originality and credibility if he hangs around the world of art and poetry.