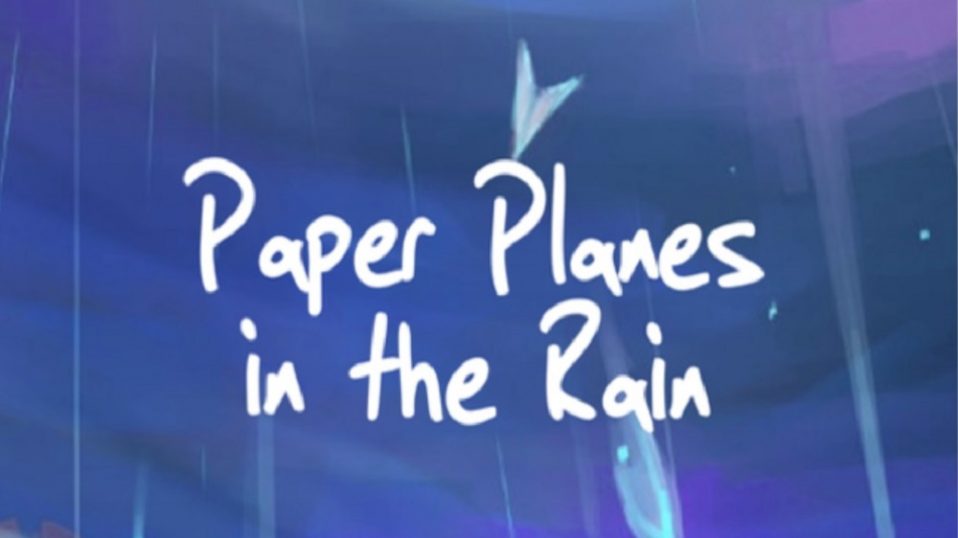 This poetic collaboration continued the work that Jide Badmus started in Scripture and Pamilerin Jacob in Memoir of Crushed Petals. Paper Planes in the Rain will give you both sides of the coin depending on what you enjoy best even though the poems and poets are in one way or the other related in their themes and style.

This grand effort by these poets promises to not disappoint any kind of reader. The poems have a depth of interiority around them, containing all the ideas and style needed to appraise meanings from them with concise images, turgid metaphors and powerful diction.

In When Loyalty Becomes a Dry Bone, Badmus juxtaposes images of loss to oblivion. For as the town-crier’s work is submerged by “digital doves and pigeons” so “…promises lost their charms & lustre” The poet creates graphic images with words which strike you, each one, as if they were pebbles fetched clean from a brook. The words live and shine, each in its place sheltering abundant meanings.

It is amazing how much creativity the poet infuses in his style.

For an idea or a meaning, the poet painstakingly recreates the clearest and most appropriate of image that will drive his point home. In the same poem, Freedom is seen as “a withered leaf, tossed/ in the wind”. Any reader and I suppose all must have seen a leaf gliding and rustling gracefully in the breeze without the faintest care in the world. What image could be more fitting to freedom as this?

How the Night Fell into Silence is philosophical as well as thrilling. How abstract images are personified leaves the reader’s mind running over this poem and even beyond it to the images which the poet creates. For the poet, Darkness is alive when the day has gone to bed and even light is consumed and disowned as a “ghost” or as the poet poetically says “a slur of sad silhouettes”. In the poem, the poet personified Silence to jealously guard the secrets of the night and despite the gloominess of the night, “the contents of shadows” are kept for the nights alone. The poems repay close readings. The enormity of their significance slowly reveals itself when read again and again.

Badmus’ poems are about a longing, a longing to fill the void created by fears, loss, pain and lack. The poet persona in Shipwrecked needs to escape from himself, to “melt into a stream & flow away from [his] fears”. He is searching for a home to wrap himself around, to turn his back from the fears, the cold and the “ache”.

The poems might be surreal and ungraspable, like mist, leaving the reader more bewildered and struggling to nip the meaning in the bud, but isn’t that the beauty of poetry, the ability to enthrall the reader and allow him rewrites the poems in his head and struggle to decipher, from the tiniest hints, meanings from the poem?

The beauty of Badmus’s poetry is that half of what he wrote was what he left out. Some of the poems are witty like Hope, others are esoteric, like Broken Promises and A Poem Died in PENury, while others are imaginative and fantastic like Nine Stitches but one thing they all have in common is the style is adequately developed and the images stand on the poems like oil on canvas. This tempo, Pamilerin Jacob upheld and delivered with his dramatic and mind-boggling verses.

Suffice to say Jacob is eccentric with words and handles his verses as one well skilled in crafting. For example, in his line “my depression is African/ wears a buba/ ties a gele”, “my depression is Nigerian/ soft as hot amala” the reader never sees it given to him this apt, this domestication of a universal phenomenon in diction he can practically relate to. Jacob’s themes are fresh and contemporary and have the capacity of striking a lot of readers.

The eponymous poem Paper Plane in the Rain is graphic and raw, with a lot of slash (/) used, which many readers would think needless, but the effect of this deliberateness can only be felt if the reader reads out the poems aloud, noting the frequent slash and reading the lines like someone depressed, struggling to make sense of his words and articulation. This particular poem is interesting in that, unlike popular beliefs about depression; it musters totally different ways of understanding depression. The poem is self-destructive and the poet-personae, despite different bid to ransom his case would prefer to be “chewed by the earth”, and live in the darkness taking over him.

Jacob’s themes swirl around mental health, loss, stigma, individuality, living out of binary categories. Litany of the Miracles of Stigma is a very good experimental poetry, and the poet successfully captures the philosophical, biological, physical and even social features of depression. The poet uses apostrophe to address “stigma” which has engineered a lot traumatic histories in the life of mental health patient. for like the poet says, “the pastor to say god is not in the heart of the mentally ill remind the imam to say we carry madness in our bones”, “every time we have episodes in public may they see us & see a pack of vultures…” Jacob in Litany of the Miracles of Stigma manages to be sarcastic as well as interesting.

Jacob’s poems also have a bigger-than-life feel about them. The poet sees the self as independent and omnipotent and identity seems to be a major theme in the poems. In Final Destination of a Scream, the poet persona brags that his voice is “louder that death/ than hell and god writes me love letters…” and “holding hands with the moon” In Fifty Lines of Surrealism. There is always an intentional struggle to conquer the self and the world in the poems which the poet always portrays as construable.

Paper Plane in the Rain is a strong collaboration by two great poets in Nigeria and I believe that this collection will make headlines for a long time. Jide Badmus and Pamilerin Jacob had done their homework well and have become household names in Nigerian poetry and this collection cements their credibility as poets to reckon with in the industry.