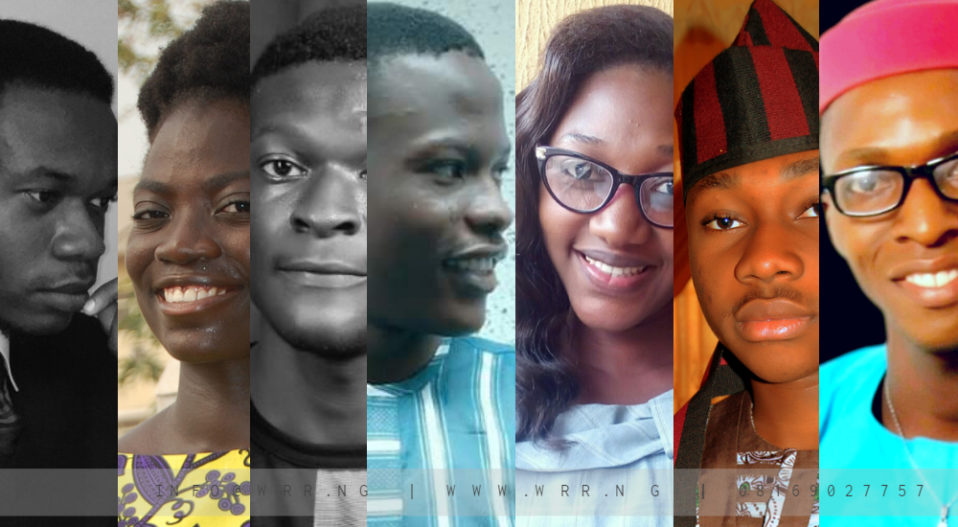 AREMU ADAMS ADEBISI is a poet and undergraduate student of Economics. His works have published on various platforms including Kalahari Review, Tuck Magazine, Mistymountain Review and several anthologies. As a writer, Aremu believes Literature is a socio-scientific phenomenon with artful application. He is the founder of ARTmosterrific, a platform where writers and readers meet.

AKOR EMMANUEL OCHE is a critic, essayist and thinker. Akor is the Secretary of the Africa Haiku Network and C.E.O of OCHEBOOKS, a writing, entrepreneurship and publishing consultancy firm which also specialize in art collection and dealing. His writings have appeared on platforms like Praxis Magazine, Grey Sparrow Press Artvill, Tuck Magazine, Expound Magazine, Provocanyon Review, Savhage Reviews and Pyrokinection.

EBUKA PRINCE OKOROAFOR (E.P Okoroafor) is a Medical student and writes from Imo State Nigeria. He believes through writing we begin to cherish the little things in life that often times, we fail notice. His work has appeared on Praxis Magazine, The Kalahari review, Poemhunter.com and The African Writer.  His poetry is inspired by his daily encounter with his immediate environment.

OLUWAPELUMI FRANCIS SALAKO is a poet whose works have been published on platforms. He is also the pioneer of Wakaabout, a street photography project dedicated to the daily struggle of the common people. Salako lives in Ogbomoso, Western Nigeria, from where he writes.

ZAINAB KABIR TALATA is a 19-year-old fiction and creative non-fiction writer presently studying Law at Nasarawa State University, Keffi (NSUK). Born in Lagos but raised in Abuja where she still lives, Zainab took interest in writing quite early, and has several writing, including two unpublished novels to her name.  She believes that writing is not just a hobby, but also an avenue to express emotions and beliefs without interruptions.

ONALEYE PELUMI FAVOUR is a fiction writer currently studying Architecture at the Obafemi Awolowo University (OAU), Ile-Ife. He writes under the pseudonym ‘Fapelo’. Though only taking writing seriously a few years ago, there are very few things he loves do more than write.

IWU JEFF (Iwuchukwu Jephta) is a poet, playwright and fiction writer hails from Imo state, Nigeria. Though born in Aba, Abia State, he has lived in the Northern parts of Nigeria. He is a trained teacher of English and Literature-in-English and holds a Nigeria Certificate in Education (NCE) in English (double major). Iwu is rounding up B.A (Ed) English) degree at Ahmadu Bello University (ABU), Zaria. He lives in and writes from Kontagora, Niger State.

IGE RACHEL is a graduate of law from the University of Ibadan and currently a student of the Nigerian Law School. Ige’s works have been published on several platforms but she is yet to publish a full-length book. In 2017 she won May 2017 edition of the Words Rhymes & Rhythm backed BRIGITTE POIRSON POETRY CONTEST (BPPC).

MIRACLE EKPEREAMAKA NWOKEDI is a budding short-story. She holds a B.sc in Mass Communication from the Nnamdi Azikiwe University. Nwokedi’s works have been published on platforms like Africanwriter, Brittlepaper, The Naked Convos and Hub 201. Her work also featured in Dark Clouds and Other Stories, an anthology of short stories from across Africa. In 2017, she was shortlisted in the JLF Foundation Creative Writing Contest. She lives in Asaba, Delta state, where she is developing a mentorship platform for young creative minds.

The 2017 edition of GAP is a hybrid of the previous ones, altered in a number of ways to make it more inclusive. Unlike the previous editions which set the age bar at twenty-four (24) and received only poetry submissions for joint publication under a co-authorship arrangement, this year’s GAP was open to poets, playwrights, novelists and short story writers under the age of twenty-seven (27) and independent publishing contracts to winners.

The Green Author Prize is one of the many ways through which we fulfill our mandate as an indigenous publishing company with great interest in developing young writing talents and promoting Nigerian literature.  You can read more about Words Rhymes & Rhythm Publishers here and learn about our other CSR initiatives, youth-targeted programs, and activities.