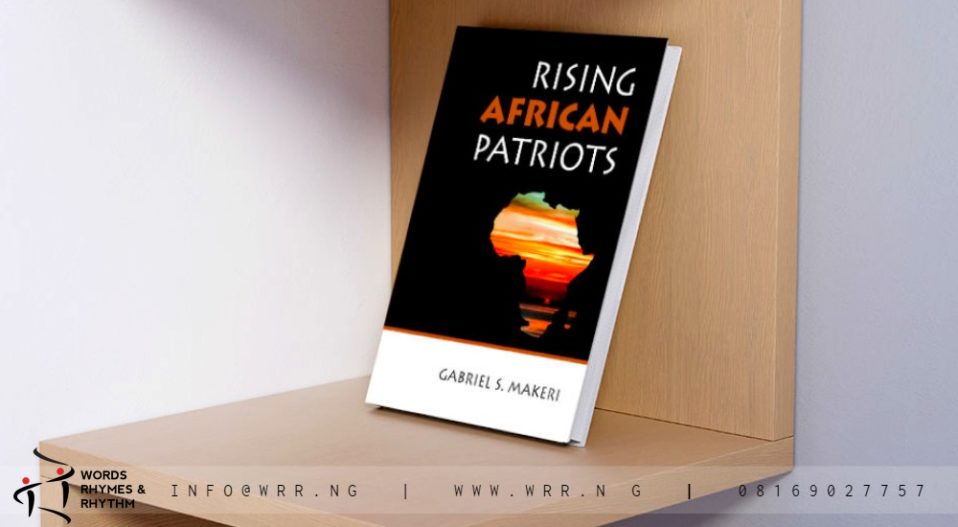 ‘Rising African Patriots’ is a hallucinatory narrative that reorients the African society in the face of deplorable squalor. Makeri is a writer and social critic well known for his mono-thematic narratives about contemporary issues bedeviling his society. He made his debut with Fear Not, Child (2014) and followed up with Roses in the Mines (2017) and thus single-handedly seamed his own unique style of prose writing whereby the characters are socially conscious and eternally educating readers about socio-cultural issues in a dialogue that endures for far too long.

In Rising African Patriots, Makeri’s theme in the same tradition with his novelistic trend seems to revolve around a singular subject: patriotism and social awareness, hence, it isn’t hard to liken that the author is but trying to revamp his generation and society as well. The plot, even though in a hard to believe narrative swirls around man and the divine bidding to leave the world a better place.

In an applaudable technique, Makeri uses magical realism to uncover the spiritual realms of angels and celestial forces. The author almost always inserts the hand- of- God to resolve conflicts and reconcile the characters to their environment.

Like the writings of Amos Tutuola, especially of his The Palmwine Drinkard, which even though mythological,  Makeri uses magical realism to socially explore humanity and reality beyond the physical realms through impassioned explorations of wide horizons, apparition of celestial bodies, and divine occurrences that are literally counteracting the law of nature.

Makeri’s Rising African Patriots is a commendable effort which will do better than most textbooks on history and civil education. The author painstakingly introduced ideas and quotations from classic books by notable personalities. It carries the reader through the world’s boundary, showing the reader the geography and topography of the world.

The author did his research so well that the reader is sure to leave this book knowledgeable about the mountains, rivers, oceans and physical topography of most countries in the world.

Makeri took us through the planes of Northern Nigeria, to the confluence of River Benue and Niger in Lokoja and moves the reader into the geography of the world from Mount Everest to the Atlantic Ocean, to the Sahara and Savanna regions, to the Orange River in the Northern Cape Province of South Africa, Moulouya River in Morocco and even to the Volta River in Ghana.

Makeri in a sort of a literary Safari takes the reader even down the indigenous hometown of Nelson Mandela in Qunnu, South Africa, thereby stimulating pride and dignity of African identity in readers.

Rising African Patriots literarily uses African pre and postcolonial history as its canvas. The reader gets to hear of the profound feats of notable Africans like Nelson Mandela, Kwame Nkrumah, Aliko Dangote, Patrick L. O. Lumumba, John Dramani Mahama among others. The narrative uses notable events from history and even notable settings in African history as a backdrop for the novel, but in a creative and imaginative manner thereby recreating real experiences in artistic and presentable tones. And here the issue with the novel lays— its overly journalistic reportage and unnatural characterization for it got overwhelmed about historical stories and forgot to develop the characters and plot.

Makeri’s descriptions are acute and evocative. He tirelessly tells the reader everything about the setting and characters which relatively bored the pace of the narrative. There was no avenue for the reader to strain his brain, for the author was generous enough to explain and capture virtually everything in his imagination thereby making the reader lazy, helplessly voracious and passive.

Makeri’s ‘Rising African Patriots’ deserves applaud for it successfully contained its theme to the end of the narrative.

It is historical and motivational, as well as educative and entertaining. It is a worthwhile read for lovers of historical fiction, lovers of literature and even eco-critics. It will uncover African geography and topography and go beyond to European settings digging out telling histories about idols like Martin Luther King jr., Washington Carver, Rosa Parks and the fate of Africans in Diaspora.

It is socially conscious and has unique cultural lessons and values that will develop the reader’s identity.