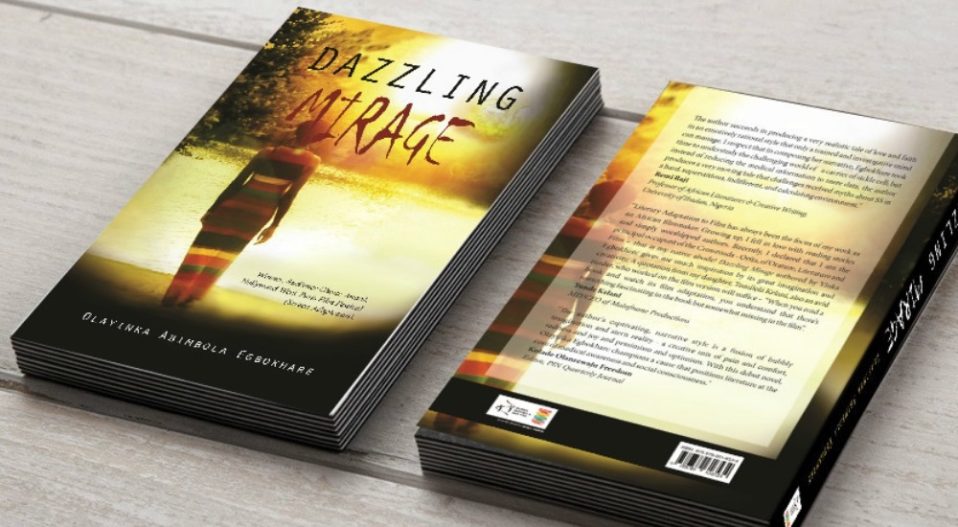 Contemporary literary narratives have transcended the transience of “art for art sake” and inculcate sociological discourses and issues that cover man and his contemporary society. Even though ‘Dazzling Mirage’ is not devoid of literary aesthetics, it has vehemently underscored thematic content over literary style.

Olayinka Abimbola Egbokare’s ‘Dazzling Mirage’ can rightly be placed in a novel tradition of literatures that lend their voices to societal issues and at the same time firmly grasping its literary roots to drive its ideology home.

The undaunted simplicity that this literature exudes is worthwhile. Egbokare avoided the unnecessary twist and turns that traditional literature is popularly known with and relates her narrative in a simplistic, captivating and intriguing way whereby the reader effortlessly grasp the message of the theme and at the same time empathize and sympathize with the characters faced with the ordeal of living with Sickle Cell Anemia. Egbokare uses her stunning and appealing protagonist Funmiwo to espouse daily issues that the ‘Sicklers’ have to live with in a society whereby anything considered different from the norm is relegated and ostracized to the nether. Egbokare laments:

“… the Sickler is suppressed. He is partly ostracized. He can’t join the school’s football team. She can’t dance in the cultural troupe. He can’t hold a demanding post. All over the Sickler, a caption is boldly printed “Delicate! Handle with care!” (76)

‘Dazzling Mirage’ isn’t just a story about Sickle Cell Anemia, but also about love, trauma, stereotype, femininity, stigmatization and humaneness. Egbokare masterfully dovetailed these themes to open up fragile issues swirling around the ordeal of being a ‘Sickler’ in Nigeria whereby anything different from the norm is termed as “Abiku” and shunned at.

This text is informative and educative. It literally says more than the everyday biology textbook we see around. It opens the reader’s eyes to delicate and crucial issues which if overlooked might have dire consequences in the future. Egbokare’s ‘Dazzling Mirage’ has dazzling lessons on genotype compatibility and Sickle Cell Anemia. For example, Sanya’s mum— Mrs. Fadipe cautioned that “… if both of them have sickle cell traits that means they are medically incompatible” (51).

‘Dazzling Mirage’ has done what none other Nigerian literature has done— analyzing the ordeal of being a ‘Sickler’ in Nigeria; and it didn’t just stop at that, it skillfully relay means by which this health issue can rightly be curtailed and the society widely orientated. Egbokare advises thus:

“… a Sickler’s lot would be better if he/ she has loving and understanding parents, who can afford to pay for his / her drugs and the hospital visits. That way, she would be able to get two of the things which are essential to the survival of a Sickler: good medicare and lots of love” (127)

This text can be rightly placed on a queer literary reading by literary critics and scholars because it discusses the “other” identity in literature, the non- normative body in a rigid essentialism. ‘Sicklers’ are considered health traitors because their marginal body places them in opposition to the normative health condition. As such, the supposed morals of strict identity have more to do with ideologies of racism than genuine ethics. It awards merit to the mainstream and relegates frailty to the disadvantaged. In this case, Egbokare asserted that ‘Sicklers’ “… don’t need our pity… All they need is to be accepted and loved, nothing more” (80).

This text is then, more than simply an invitation to the sickle cell ordeal in Nigeria, it is a compass that helps readers glide from familiar notions about sickle cell Anemia in Nigeria— which are of course stereotypical, to totally freshened ideologies that discourage stigmatization, superstitions and also creates a humane space for sickle cell health conditions.

Egbokare should be applauded for having to choose the Sickle Cell discourse among the many themes for discussion in African literature, and also doing it masterfully and creatively through literature. Identity and culture is not anymore a homogenous entity and many minorities are no longer willing to pretend that it is. Muted voices are now calling for newer definitions of identity, celebrating their uniqueness and refusing to deny their own backgrounds by blending in with the rest. These efforts are as influential in literature as in life; and this is exactly what ‘Dazzling Mirage’ achieved— lending its voice to the fight for acceptance and speaking out against discrimination and stigmatization. Hence, this piece, despite its literary overtness is however immersed in politics; there is no divorcing politics in literature, and it is present in every assumption made about the social order, even when nothing technically labeled political is being addressed.

‘Dazzling Mirage’ has scheming overtones and ideas that tactically influences the reader and pricks his conscience making him unconsciously share Egbokare’s worldview. As George Orwell rightly captured, “no book is genuinely free from political bias”.

Despite the emphatic theme in the narrative, ‘Dazzling Mirage’ also did well to remember its literary aesthetics. The novel is adorned in metaphors, similes and grounded figures of speech which undeniably prove that the author is poetical and skilled with words; a virtue which unfortunately flawed the novel’s naturalness. The superfluous literariness of the characters’ diction is unbelievable and undermines the story’s realness. It is rather odd to believe that all characters in this narrative are skillfully poetical and communicate fluent English. Accepted, the novel is set in a bourgeois locale with literate and enlightened characters, however, what happens to the ideal Nigerian setting, basking in accented grammars and ‘mother tongued inflection’?

Even the illiterate Alli in the narrative is poetical and literary despite his crude grammar; and casual friends like Lanre and Dotun also have to communicate in rigid syntactic grandeur and overt literariness. A little slight in characters’ diction would have literally enthralled all sorts of readers— literate, semi literate and unenlightened in the narrative. Hence, the novel has issues with verisimilitude.

Nonetheless, Egbokare’s ‘Dazzling Mirage’ successfully used literature as a vehicle to open social issues and she did it by skillfully educating, informing and entertaining the reader.

It is a worthwhile effort which relates the health uniqueness and challenges of being a ‘Sickler’ in Nigeria. This novel is generally a good read and it deserves acclamation and recommended for all readers eager to demystify the superstition and stigma that Sickle Cell Anemia has lately been shrouded in; readers who are curious about the dictates of genotype compatibility; and generally lovers of good literature and art.