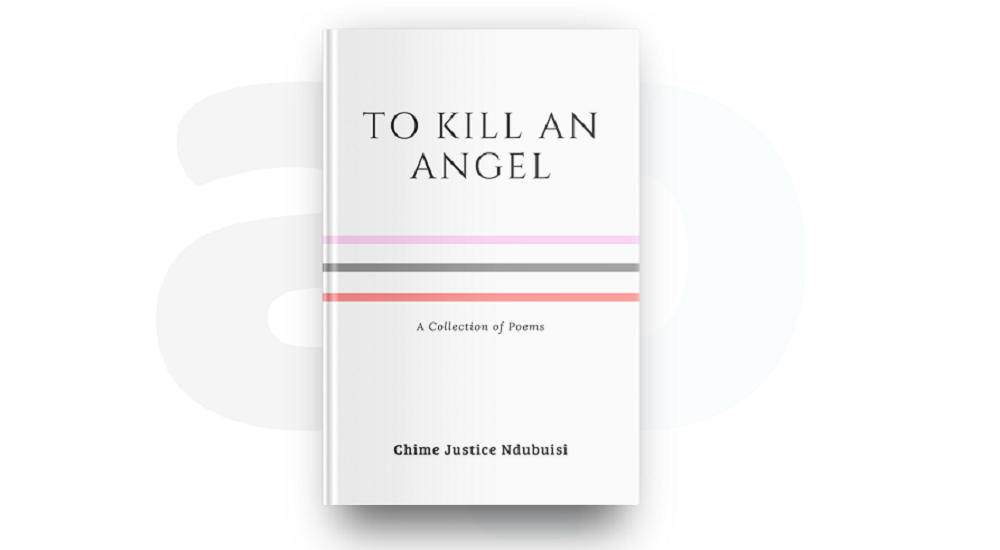 The language and metaphors are fresh and domesticated. While reading, we have a sense of place in the poems. The poet brings us to the local setting where he derives his inspiration from.

Ndubuisi brings fresh verses in his To Kill an Angel collection of poetry. The poems read like prose, delving so much into history and using historical allusions to give us an alternative view of the stories and history we know. Some of the poems read like epic, pulling famous and infamous names from history to allude to, and giving the reader totally fresh perspectives on history.

It is interesting reading a poem that alludes so much from the infamous Judas Iscariots’ betrayal story.  And what makes it more interesting is that it uses a first person point of view, giving us, for the first time, an insight into what could have triggered or inspired Judas Iscariot to betray his master, Jesus of Nazareth. In the poem “Iscariot Trilogy: The Defense”, Ndubuisi in a novel effort shows us what Judas could probably have been thinking when he betrayed Jesus. He reconstructed the story, drawing from myriad of reasons why Judas could have betrayed his master. In the end of the poem, Judas vindicated himself thus, “They won’t appreciate the cursed part I/ played in the salvation of everyone”. In the poem, the poet writes about the blackmail from family, spouse, conscience, and even the Pharisees that Judas Iscariot suffered, perspectives we hardly think about. With simple and well-articulated diction, Ndubuisi gives us a fresh view of the betrayal story and this is a commendable effort.

The poems, even though verbose and expressing more than is needed, tell stories. This of course offers the reader everything on his palms, and even discourages careful reading and reflection. Nonetheless, the diction is as inviting as the historical events reconstructed in the story and it has the ability to keep a reader interested.

The poet, unafraid to experiment with styles, blends fable and poetry by introducing animals as characters in his poem “One Eyed God”. The two dogs in this poem, like in most fables, signify the voice of moral and reason in the poem. This poem hints at the possibility of reincarnation and even transmigration. According to the poet personae, one of the dogs said, “…there were many worlds past and present/ And each has different maker/ With different terms and condition,/ That people change location after each death.”

TO KILL AN ANGEL BY CHIME JUSTICE NDUBUISI

Sometimes it’s hard knowing what the poems are trying to infer, remaining in that surreal and dream-like state and leaving the reader guessing at meaning since the subject matter the poems begin with are most times not what they end with. This however shows that the poet is eclectic and has a vast array of imaginations to be able to weave together different topics together and still find the ability to drive his point home.

The language and metaphors are fresh and domesticated. While reading, we have a sense of place in the poems. The poet brings us to the local setting where he derives his inspiration from.

In the poem “Weaverbird”, the poet masterfully recreates local images and flavours and in the end, the poem reads like folklore. In this poem, the poet talks about the effect of neocolonialism and colonialism and the bastardization of African cultures after contact with Europeans. He uses the weaverbird to symbolize colonialism and how it came to take up “our house”, “our inheritance” and to build its nest “right inside our Obi”. This is a powerful metaphor that speaks volumes and the poet was able to masterfully wield it to bring to light the gory effect of colonialism on African values and culture. In the poem, the poet says, referring to the weaverbird, “we thought you would perch and let us live.” It isn’t hard to see that the poet’s metaphors are original and carefully chosen to capture his unique themes. In this poem, the poet contrasts foreign cultures and African cultures and shows how one trying to imbibe the other would lead to catastrophe and at best culture shock.

Ndubuisi’s poems sometimes read like performances, talking to the reader, calling the reader’s attention to things he otherwise wouldn’t have seen. He is socially conscious and engages in contemporary matters of corruption, bad governance, mismanagement, corruption, police brutality, injustice, bedevilling his country. He asks dire questions the masses need to be asking. He pokes governance and holds them accountable with his socially conscious poems. In a poem that could be read as a satire, he mourns the injustices in his nation thus: “We have gone but countless paces backwards!/ We have been ruthlessly oppressed/ We have been constantly cast down/ We have been smeared with triumphalism/ We have been lynched front, back and center,/ We have been crippled by sectarianism/”

With this collection, Ndubuisi lends his voice to the school of poets that hold the government accountable. And with scathing and sometimes satiric criticism, even to the point of lampoon, he calls leaders attention to the plight of the nation.

TO KILL AN ANGEL BY CHIME JUSTICE NDUBUISI

Ndubuisi is a new voice in the Nigerian poetry scene. With his experimental style of poetry and fresh ways of reinventing history and allusions, he will be a poet to watch out for. To Kill an Angel is history, politics, identity, and life put together. It promises more as readers delve into the collection. The poems read like epics and they contain a lot of local and universal allusions. It has what it takes to inspire social and political conversations and to enlighten readers about social issues around them.