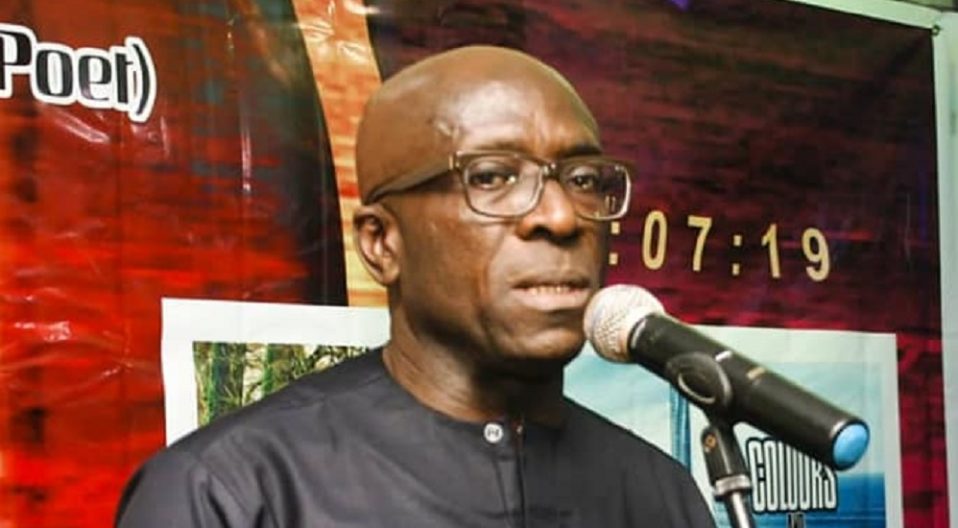 In his “trilogy” – Walking Truths, That Beautiful Picture and Colours and Borders, Di Poet employs the services of an orchestra to enliven his poems for audiences seeking the unification of entertainment and aesthetics.

I would have loved to begin reviewing the poetic trilogy forthwith, but there is an utmost need to unfurl the poet behind the poems. Echoes owe their existence to walls. Sir Eriata Oribhabor is an untiring warrior for a sane society and a die-hard canvasser for “that beautiful picture”. Amid cheers and jeers, his writings emit truths strutting varied arenas. As a minstrel, his ever-tweeting pen traverses colours and borders, spilling oneness on papers of humanity. The poet, in his recent post on Facebook, unveiled a new sobriquet – Eriata Oribhabor (Di Poet). For one who gushes poetry like a waterfall, ascribing definiteness to his “poet status” is not out of place. Di Poet who is also fondly addressed as “The Merchant of Poetry” is an unstoppable brewer of lines and massive “carrier” of poetry across borders. Taking the foregoing into consideration, associating knighthood with “Di Poet”, in form of the appellation “Sir”, is meritoriously earned.

Di Poet has a very distinct style of “poeming”. “Don’t want to start a poem / It rains me poems non-stop,” he declares in “Colours and Borders”. His poems are characterized by refined compactness and undulating harmony. His verses are so tightly woven that they could be described as grains of sand and enjoyed as packs of small chops. Noticeably, Di Poet has a penchant for subsuming his poems in riveting musicality.

In his “trilogy” – Walking Truths, That Beautiful Picture and Colours and Borders, Di Poet employs the services of an orchestra to enliven his poems for audiences seeking the unification of entertainment and aesthetics.

Do not be mistaken, this orchestra isn’t constituted by animate artistes, but by sound devices including repetition, cadence, alliteration, assonance and consonance, playing diverse musical instruments to achieve uninterrupted rhythm. He does not dwell unnecessarily in his works; consequently, most of the poems find it hard outliving a page. This attests to the fact that Di Poet is a frugal spender of words who prefers to keep it brief and sturdy (fleshy) in accordance with the mighty-little nature of poetry. I think Di Poet has indirectly made a reference to his literary style in one of the poems where he defines beauty thus:

Dominant in the poetry trilogy is Di Poet’s adept use of metaphors, imagery and sarcasm. The verses are veined by connotative devices conjuring vivid imageries that make a reader embark on images-filled sojourn. In his unwavering quest to right the wrongs in the society, Di Poet wields sarcasm as a scourge for uprooting the woes of humanity.

Percy Shelley defines poetry as “an echo asking a shadow to dance and makes familiar objects be as if they were not familiar.” Di Poet writes about anything, everywhere, anytime. He finds his muse in the bowel of a bird, in the belly of a camel and in the gut of a fish. In one of his poems, he assertively declares himself “The Muse” in recognition of how effortlessly the pen does his bidding. You don’t teach a bird how to fly, it simply flies; you don’t tell Eriata Di Poet when to write, he simply writes. However, it is important to note that, despite the unbelievable prolificness of Di Poet, his works are not deprived of essence and quality. All poems in the trilogy draw needful breaths.

The poetry collections entitled “Walking Truths”, “That Beautiful Picture” and Colours and Borders are imprints of “Something For Everybody Ventures”, a publishing outfit run by the author. The quality of the publication emboldens the optimistic ideology of Di Poet as regards having a beautiful picture across borders. “It doesn’t have to be foreign to be deemed good.” The books ooze beauty and appeal many would believe could not be obtained locally. Di Poet has walked his talk, and sung his song.

The cover pages of the anthologies create immediate impressions and are profoundly symbolistic. The author has a penchant for packaging his poems in colourful and meaningful wraps. For Walking Truths, there is a picture of a wooden bridge/walkway leading into the woods. There is no sign of a physical presence, however, the title of the collection – Walking Truths – is boldly plastered on the walkway. Of course, the truth is not a vertebrate, and one should not expect to see it walking on its limbs. Truth, as should be the case, is written with a white font to symbolize its pristine nature. Perhaps, the use of red for “Walking” indicates the alarming attribute of the truth or the bloody aftermath of a truth walking into the woods, armed to the teeth with words. In “That Beautiful Picture, surrealness is created with rays of lights hitting the water. Colours and Borders features the image of the border fence of Mexico and the USA at Playas de Tijuana.

Humanity is indivisible. Sir Eriata reechoes this belief with “Colours and Borders” wherein as a minstrel he captures his roving experiences in enchanting lines. Di Poet, uninhibited by borders, traces elements of commonality amongst races and ethnics. As a much-travelled man, he has brought the knowledge of “wide seeing” into his poetry, hoping it would reorder the orientation of readers, and engender the deletion of societal stratification. The following verses magnify the said theme:

Sir Eriata Oribhabor (Di Poet) will not, as a blossoming flower, scorn his root. In the first poem entitled “Evergreen” in Colours and Borders, the nostalgic poet introduces us to his modest background:

Di poet, with these lines, honours the labour of his parents, who via their immeasurable sacrifices ensured he had a formal education. If you are wondering where Di Poet’s love for his country emanates from, you have the answer in this line – “These lines speak dad’s tireless hands building a town.” And this said town is Warri in Delta State, Nigeria. Surely, the Merchant of Poetry holds his background and memories of his parents dear, and would keep working towards its continued dignification.

There is an examination of different cultures experienced by the poet while visiting places such as Chicago, London, Tijuana, Istanbul, San Diego, Chula Vista, Salerno, East Legon etc. In the poems, history, food, music and dance are prominently discussed in a manner that elicit the yearnings of a reader. In his sojourn, the author makes friends and reinforces ties with people of varied backgrounds. Filled with gratitude for friendships, he mentions names such as Anna Patrizia Caminati, Pilar. R. Aranda, Erah Oalind, Olajumoke Ogunsanya, Nkemjika Christien, Maryam Memee, and so on. Some of these “poet-friends” wrote poems in his honour, and are featured in the trilogy

Clean water and sanitation are some of the sustainable development goals. Notably, Di Poet takes this on as a personal responsibility in “That Beautiful Picture”, bemoaning environmental degradation. Listen:

Di Poet has refused to be swayed or have his senses numbed by a beautiful picture taken elsewhere. Very satirical, he draws the attention of traveling takers of beautiful pictures to the rot back home

Di Poet has refused to be swayed or have his senses numbed by a beautiful picture taken elsewhere. Very satirical, he draws the attention of traveling takers of beautiful pictures to the rot back home

It is very saddening that violence holds the country by its jugular. It used to be on our screens, now etched in our eyes. In “Yesterday” contained in “Walking Truths”, Di Poet captures these heart-wrenching experiences thus:

It is very saddening that violence holds the country by its jugular. It used to be on our screens, now etched in our eyes. In “Yesterday” contained in “Walking Truths”, Di Poet captures these heart-wrenching experiences thus:

In another poem in the collection, “Still Walking Nation”, the author mentions the difficulty in ascertaining which of the terror groups is responsible for unleashing mayhem at a particular time. It is so bad that the momentary muteness of a terror group is an active period for another, painting pictures of mindless bloodlettings. Di Poet is concerned about these horrendous occurrences, and in performing his role as a “protector of the realm”, he lends his voice towards curtailing the madness.

Religion is a very fundamental constituent of any society, responsible for moulding hearts, and hearts determine deeds. Sadly, many horrible deeds are being perpetrated in the name of religion, making one wonder if religion hasn’t done more harm than the good it ought to do. The author, utterly sarcastic, tackles religious hypocrisy in the following lines amongst others:

In the poetic trilogy, Di Poet who is an ardent promoter of Naija Pidgin, writes in the language which is intrinsic to him. Some of the Naija Pidgin poems in the trilogy include: Not Fo Dis Ples, Giv Mi Marej, Dis Na Club, If Na Bread etc.

Evidently, the author of this poetic trilogy is a social activist who has dedicated most of his poems to addressing societal ills. He simply cannot turn a blind eye to happenings around him. He voices his concerns, hoping that they would inspire changes favouring our individual and collective wellbeing.

With these poetic offerings, Sir Eriata Oribhabor (Di Poet) has sealed his status as a foremost and global poet. And, “his story, won’t, in the eyes of creative climes, fade.” Never!

Next post NIGERIAN POETRY: IS THERE AN INFERIOR MENTALITY PROBLEM (commentary by Eriata Oribhabor)