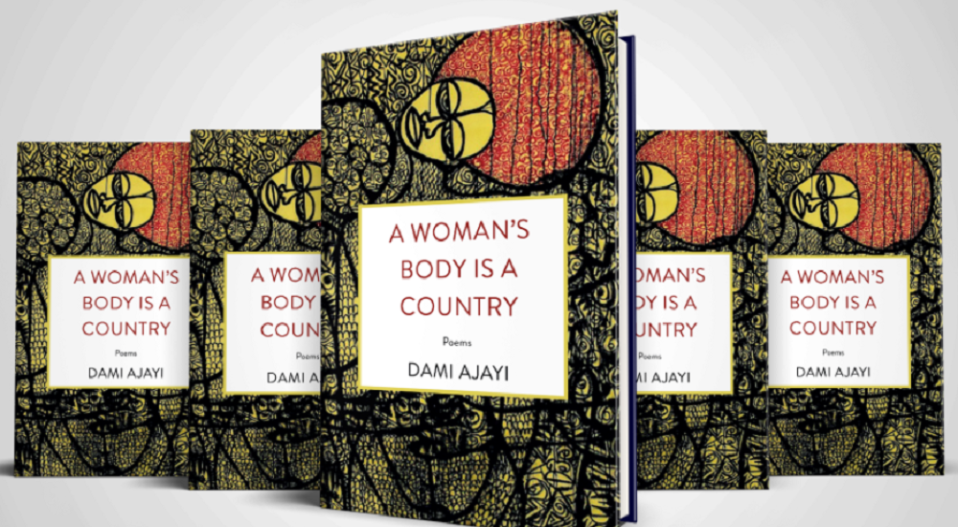 Prior to reading A Woman’s Body is a Country, I had the opportunity to spend few hours with Dami Ajayi, who was at New York for a visit. I was excited to gain insight about his inspiration, the types of books he reads, the songs that he listens to, and even his background in studying Medicine and how that has influenced his poetry.

From our conversation, it was obvious that Dami Ajayi is a person of great intellect. He is also attentive to detail and he is a highly educated person who loves art. He is knowledgeable about the history and background of songs and also their influence on the audience.

During this conversation, he spoke about how the experiences from his study of medicine has influenced his writing. He said that, being around people who are ill or healing, dying or have died has made him to realize that “living is a disease and death itself is the beginning of life.”

Recently, I read a book titled Show Your Work! (10 Ways to Share Your Creativity and Get Discovered), written by Austin Kleon. In this book, Austin motivates writers, and he gave a guide to how a writer can present themselves in the best way. Austin also talked about life and in a section he mentioned that as writers, we should read obituaries. The importance of reading obituaries is that we will value life and consciously, live in better ways. Austin goes further to say that obituaries will make us curious to know what will be written about us, when we are gone.

During the conversation with Dami Ajayi, he mentioned that; A Woman’s Body is a Country is written in memory of his friends ‘who went too soon’. In the dedication, Dami writes:

On page 10, Dami writes a poem titled Ode to an Untimely Obituary (For Sylva, for peter). In the first stanza of this poem he writes:

“& how do you console a man
when death snatches his woman
from his arm?”

Dami’s use of in medias res makes a writer feel the melancholy in the plot of this poem. In this poem, a reader will see that death, is not only about who and what is gone but what remains in the life that bears the loss.

In other poems, Dami talks about time, and the mystery in it, through personification.

Consider On Time, in which Dami writes;

When I wasn’t writing,
Time was cheating on me.”

In another poem titled Twenty Years (For Yinka Shyllon) on page 29, Dami writes;

“Time is a currency
We do not spend wisely.”

He is also very skilled in mixing human psychology with poetry and his poems give light to how we are. Still in the poem Twenty Years (For Yinka Shyllon) on page 29, he writes:

“They say people are fluid like water
But unlike water, they are not as clear.”

One of the greatest importance of books and writings, regardless of the forms in which it comes is that it allows readers to go to places where they cannot physically present. Some people have travelled the world just by reading good books.

So many of Dami’s poems with great imagery brought me  home to Nigeria. My favorite poem about home is on page 6 and it is titled Sunday Afternoons. There were some poems about Lagos and some written in reference to Ibadan.

Another prominent theme in A Woman’s Body is a Country is love. Dami’s description of love in this book is highly compelling. He writes about love like liquor that drowns a person into his or her feelings. On page 12, we have a poem titled My Love for you is psychosis. In this poem, the persona’s love is a disconnection from reality that he does not mind having.

The last poem in this collection shares the title of the book; A Woman’s Body is a Country.  It is a love poem that relates romance with a country. This poem ends with:

“But this too is patriotism,
The royal swelling of a man’s body.
Because a woman’s body is a country.”

A Woman’s Body Is A Country that a man can live in, a man can leave, a man can fight for, and in some cases, die for. This too, is patriotism. Dami Ajayi’s comeback with A Woman’s Body is a Country is indeed, outstanding and beautiful in many ways.

Previous post DEFINITION OF A POEM: NOTES IN VERSE by Aremu Adams Adebisi