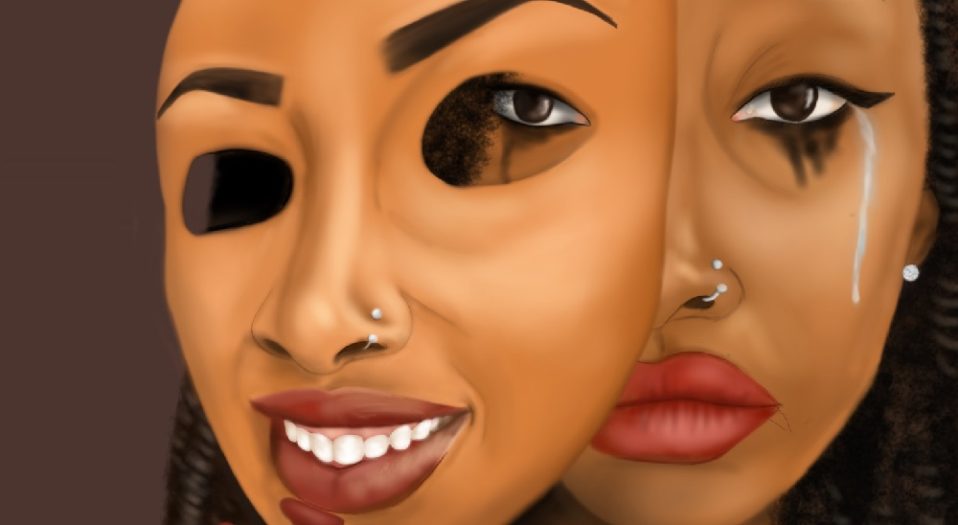 Caked sperm flaked off Cynthia’s stomach when she woke up that Saturday morning. She was alone in the bedroom. The bastard was gone. As usual.

She heaved a sigh as she lazily crawled to the edge of the bed, absentmindedly grabbing her ripped bra and panties. Her day was starting exactly as the days before.

The only thing different about that morning was that she wasn’t sad, or confused. She knew what had to be done. It was no longer a matter of IF. Now it was about WHEN. She had decided that in the course of the night. WHEN!

All it had taken to get her from IF to WHEN was another night of mechanical romance, pinned down under his bulky frame with his throbbing member splicing her unwilling and dry lower labia and his prickly chest hair needle-pricking her uninterested, drooping nipples.

A few years back, those same nipples would have stood erect in salute of his aliveness. She would have arched and groaned and clawed and moaned. She would have wrapped her legs around his back and punctuated her “Yes and harder” chants which his name. But the dark days had taken all that away.

Last night, as he panted, disrespectful hands squeezing her breasts like a child trying to force out more liquid from an over-sucked orange, all she could think of was WHEN. When would he come and roll off her body. As usual, spent and sleepy.

His breath, a nauseating cocktail of beer, garlic and mint, breached her nose with every breath, marking time with the penetration of his member and his huff-puff.

Since the onset of the dark days, Maxwell was clockwork when it came to sex. He would walk into the room, order her to undress and almost exactly 3 minutes later he would climax, tensing up like an electrocuted person and muttering gibberish. On nights when she failed to undress as bided, he would just tear off whatever she had one and turn her unprotesting body until he achieved the position he wanted for penetration. It was sex with her body, not her mind or her brain.

Last night was one of the ‘tear-off-her-undies’ days. About 3 minutes seconds after he had gotten her in position and penetrated, he climaxed. Ten seconds later, like ten years to her, he had rolled off her body like a log, nearly crushing her lifeless arm. Even after his exit from inside and above her, she had still felt his weight on her body, pinning her down mentally. A few seconds later, his raspy snoring would bring her back to the present.

It was the same routine.

For the first time in weeks, she had felt dirty after the act. It was not because of the semen he spurted on her stomach nor the sticky sweat on her body. It was certainly not because of the lingering odor of his cave of a mouth, not the fact that he just switched off as soon as he was done milking her body for his orgasm. The bastard!

What actually made her feel dirty was because she had allowed him have another night of freedom with her body without a fight. One more night, like the other 154 nights before. Yes, she was counting the days.

It was 168 nights since the last time she had hungrily opened her laps to welcome Maxwell’s throbbing phallus. That was on their wedding night. It was the only day sex with him made any sense. The days after were just boring routine conjugal coitus. He acted uninterested. The few friends she had been bold enough to tell said it was normal in new marriages.

But two weeks after that explosive wedding night, the chicken came home to roost. That lovely Monday, she had returned home from work earlier than usual to meet Maxwell’s car parked in the compound. It was unusual because he always returned home late. Even more unusual was the second car parked beside his. She had never seen it before.

As she parked her car and made to enter the house, the gateman made some funny attempt to keep her outside with incoherent jibbyjabber. She had casually dismissed him and walked into the house with a hiss. But then the gateman’s antics made sense when she entered the house.

There, in her living room, were three sweaty, fully naked men having a go at each other, their clothes strewn all over the furniture and floor.

One of them was her husband. Maxwell lay on his back on their movie couch with his legs spread wide apart to accommodate a muscular demon of man who straddled him while a much smaller man stood at the other end of the couch with his manhood deep inside her husband’s mouth.

She had gagged, then puked before passing out.

Two weeks later, after two secret family meetings and several pep talks about the ‘ways of men’, ‘thorns of marriage’ and the ‘shame of divorce’ from friends, the marriage was back on track. But it was only her body that remained in the marriage. Her mind had died.

He regularly deposited into her account without comment. They never went out together and never talked. She did not cook for him and he never asked for anything from her. He only wanted his nightly dosage of wild sex.

The saddest thing about it all was that she had allowed it to go on for so long without a fight. She took it all as he offered it, his penis and his bullshit filled her mouth, her vagina and her ears.

It was now a matter of WHEN. When could be now. Yes. Why not now?

Help me complete the story by choosing her next move, her NOW move — she killed him, she committed suicide, she exposed him to the world, she started a new relationship and stayed married to him, she stopped him from having sex with her or she just divorced him. Tell me what you think in the comment section.