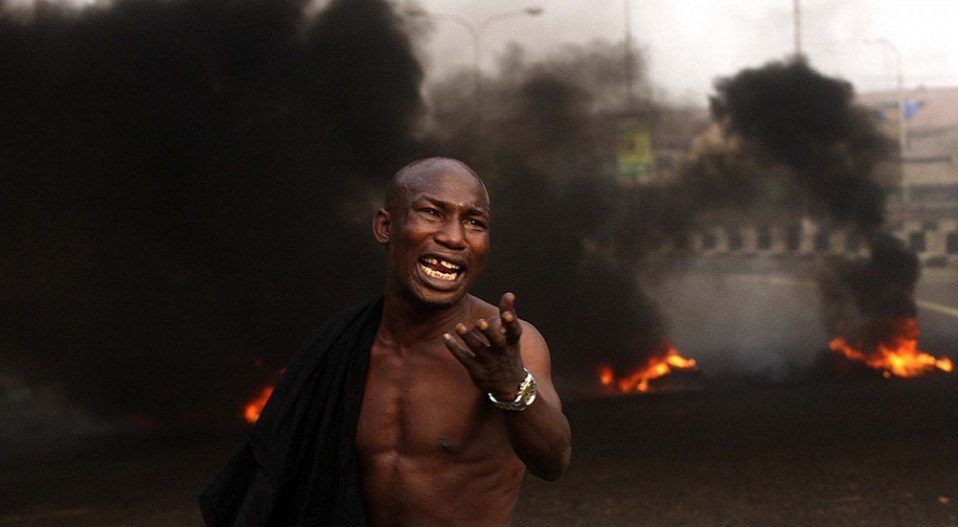 I look at the man screaming at my feet, my prisoner, grinning as he groans.

You might wonder why he groans. He is simply in pain. I have just chopped off his legs. His hands will be next.

Before the chopping, I purged the evil out of him with my late mother’s pestle. He is bleeding profusely, a human pulp that would have a few years before drawing tears from my eyes.

Yes, let him groan. My people did not even have the luxury of a final groan before his ilk snuffed their candles.

Can anyone say I’m not justified? Can any right thinking man ever convince my conscience that it has erred? Who can say what I have done, and will do again, is wrong? Let him come and I’ll show him that the timid tortoise was not created without teeth.

I still remember it all like it happened yesterday. Yes I remember the night of darkness, when everyone was taken away from me. That one night when I lost all that mattered.

The crickets were composing a ragged tune that moonless night. I was there still awake, waiting for Tina, my girlfriend in Lagos, to come online on 2go so that we could chat.

Little Gyang was sleeping right beside me, talking as he slept. The words he spoke were senseless to me then, but how was I to know that they would be the last words I’ll hear from him?

The tears are welling up in my eyes again.

Well, a man is a man. Lami was in the other room with Simi. It was eerily quiet, but I bet it didn’t seem strange at the time. Only the snoring from Baba’s room bothered the peace from time to time. I remembered wondering how Mama ever got to sleep through his raucous snoring.

I got a message from Tina, a funny one. My fingers flew across my Nokia 3230 with practiced ease. I was smiling because of her funny comment. She had asked if I was man enough to go out in the daytime without fear of being killed. I told her nobody alive could attack me, much less kill me.

Just then I heard rapid knocks on the front door. By my phone’s time, it was a quarter to 12 midnight. Why would anyone be visiting at that time of the night, I wondered.

I knew the voice. It was a friend. We played football together as the Aguwan Rogo primary school field. The knocking became more insistent.

I got up, took the keys and opened the door.

What occurred next should only happen in the pages of novels and apocalyptic movies. As I eased the door open, an object struck me squarely on the forehead. It was the blunt edge of an axe. I stumbled back into the room dazed and collapsed. My phone collapsed with me.

I laid there on the floor. My mind was telling me to get up, but I was paralyzed. Three men walked into the room carrying clubs and machetes. All of them wore kaftans and had their faces masked. I wanted to speak and cry for help but the words stayed stuck to my throat like eba swallowed without soup.

“A kasha su duka,” one of them cried.

Oh God! I laid there watching, yes I was watching as a club was smashed on the head of Gyang, my little brother. Blood spattered all around the room. He must have died instantly, a soundless death. He never got the chance to scream.

“Aaaaghhh! Baba, ahhhhgghh,” I groaned, still unable to stand. I began to creep to my brother’s corpse.

My screams must have woken everyone. They all ran into the room. Baba came first. If only I hadn’t screamed! As Baba entered the room, one of the men slashed at his head with a large cutlass.

I saw my father’s head fall at the feet of my screaming mother who had only just walked in. I watched blood spurting from his neck. I groaned again but still couldn’t stand up.

Simi and Lami began screaming but mother just stood there looking down at her husband’s headless torso. She must have been too dazed too. One of our assailants took off her head in two quick strikes. She fell on her husband’s corpse, contributing her share to the pool of blood gathering on the dusty floor.

I wanted to scream again but as I opened my mouth someone struck me with something hard in the thick of my skull. I fainted. Even in my comatose state I could hear my sisters’ scream. I heard it all, like voices in a dream…and I could do nothing!

When I woke up, I was on a gurney with bandages all over my body. Blood still flowed from my head. The walls and uniforms suggested I was in hospital. How I got there, I did not know.

Well, I heard two days later that my family was history. I personally identified the corpses one by one. Lami was stabbed multiple times while Simi was raped and hacked to pieces. Simi was just 8.

The attackers had also set our house on fire with all of us inside.

I returned home, ugly and scarred from the burns I suffered, and learnt that our family was not the only one attacked. Several families had been targeted and over 20 people, all friends and family, were dead.

My mind was made up. If these strangers in Jos could erase my family, I would do my bit to revenge. I am a son of the soil.

It’s been a few months.

I stand with my friend, AVENGERS is what we call ourselves. There is a man groaning before me. His cries are wild, almost animal. I feel nothing for him. Yes, why should I? His people killed our people like rams. Did they not set the bombs?

My eyes catch the prayer scar on his forehead. It annoys me. I spit and turn away briefly. I am doing nothing wrong. If I do not avenge my folks, who will?

“Uuuhhmm, aaaahhh,” the man screams again, “please help me. I am a Muslim but I do not kill. Please”.

He is beginning to get on my nerves so I get up and pick up my machete. Let me put an end to his misery.

As I walk towards him, I hear sirens. The useless JTF guys are around. I could see two vehicles approaching from afar. Someone must have tipped them off.

My prisoner looks at me, eyes speaking volumes, almost moving me but it didn’t. He is no different from any of the ten I have killed so far.

I lift up my machete and, with all the anger in me, and strike off his head.

No one can blame me….

I am just an avenger.

Previous post MY STRENGTH IS IN YOU by Adedokun Seyi