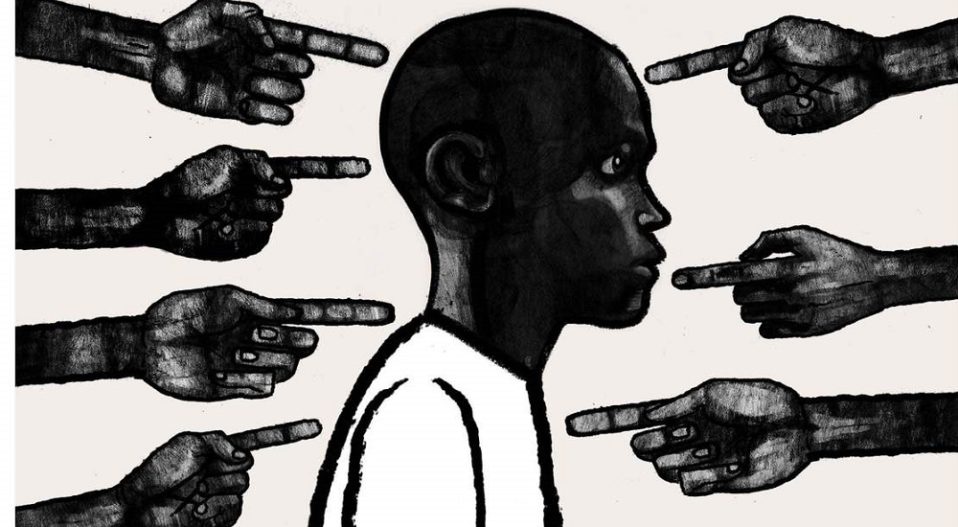 It is very important for me to know the answer to the question “Am I a witch?”. Many people have accused me of a craft I only see in films that they call Nollywood.

I am now locked up in a dark room filled with mosquitoes because of it. They said that if I failed to confess, they would give me the Onome treatment.

Ye! Yeee! That is death. That is death by fire. They burnt Onome alive in the presence of everybody because she did not say she was a witch.

If my case comes to that, I will not be able to refuse to say it. But they will ask me to deliver those bewitched. Since I cannot do that, I will still burn, burn with fire.

My name is Bomboy. That is the name people have been calling me since the day I began to differentiate between my right and left hands. I am a twelve years old boy. I live in the Uja. I hear it is a nice place to live in, but only a small part of its good side is known to me. The only time I felt good about it was when fellow students praised the quality of any of the hand me down items I took to school, whether it was a wrist-watch or a phone. I like the way they used to gather around me. That used to make me feel like a king.

Yes, for that short period I used to feel big because everybody would be around me trying to catch a glimpse of my Rolex watch and my camera phone that had a lot of Nigerian and American films. Even those with neater school uniform used to play the subjects to me then. But thought of the home where I get those items of joy used to take away the happiness.

At home, Daddy and Mummy called me a witch. I don’t know why they liked to call me a witch. I don’t know any spirit, evil or good. I have never painted my face in a scary way like the witches I see in Yoruba films. Even the white marks around the eyes of dibias of Nigerian Films only come to me from the films. Yet whenever something went wrong in the house, I would be accused of it. When the TV spoiled, I was the one. When somebody woke up with a headache, accusing fingers pointed at me.

At the beginning, they did not beat me. They started giving me expensive gifts like Rolex wrist-watch and a latest model of Nokia phone. Daddy told me he hoped they (the gifts) would “appease” me. I didn’t know the meaning of the word. The dictionary told me it was “to make some one less angry or to stop them from attacking you by giving them what they want”. I later told Daddy I was neither angry with him nor willing to attack him. He said that it did not matter. It was only my happiness they were after as good parents.

they all turned against me the day Mummy had a bad dream. She started screaming my name from their bed room. When I saw her coming, I ran to the kitchen. She followed me. She slipped on the tiles of the kitchen. Daddy heard her crying for help. He chased me outside the house and across the road. I escaped a fast bus. He was not lucky. It catapulted him away.

I wanted to go and see how he was. Mummy shouted that I was a witch. She said that I had finished Daddy. Some of the people that had gathered there ran toward me. I jumped in to an uncompleted building and I took a short cut to the school.

I was the first person to get to school that day. It was very cold that morning. The cold weather and the sound of different birds made me fear. I felt it was cold because a spirit, Daddy’s spirit, was there in the school to punish me for my act of witch-craft.

I used to hear people saying everything was cold when they saw the dead. But the spirit didn’t come. I didn’t see it.

The sounds of the birds were scary. Some of them sounded like the witches’ bird in Yoruba films. I felt they were trying to use the opportunity of my loneliness to initiate me in to their society. I could hear a pattern of the sound that sounded like KABO SE’EYE AYE, something like welcome in to the world assembly of witches. The sound continued. When I was about to run out of the school, some of my class mates and some older students started arriving.

The prefect in whose house I was asked me to go and sit down. He said I shouldn’t sweep. He collected my phone and said he wanted to use it to make yanga at a female student. After making the show of a big boy to the big female student, he gave me my phone, and I went in to the class. The school business was about to start.

Our first period was that of Mr. Kawu, the Mathematics teacher. He was a tall man with bad temper especially on the days he wore black dress. His dark complexion used to make him more terrible in the dress. Whenever he was angry, he never considered anything too much for punishment. One day he used koboko to beat a boy. The whip touched his left eye, and the next time we saw the boy, the eye had sunk.

As the lesson was going on, his phone rang. The ringing tone was like those tiny ones that are in-built for such cheap phones. Some of the students, who had heard my phone singing Eedris Abdulkareem’s Mr. Lecturer, laughed at such a commons tone coming from the Mathematics teacher’s phone. They looked at both the teacher and me alternately.

Mr. Kawu glared at me as if I was the one laughing. He nodded forcefully as if to say this is your last warning. I decided to switch off my phone so that I would avoid offending him through the ringing tone of my phone. As I pressed the button, a sonorous voice started bidding me farewell from the phone. I had stepped in to what I was trying to avoid. I tried to muffle the sound. It was too late. Mr. Kawu had heard it.

He called me to the front of the class, his hand clutching a wire-bare doubled over cable. He asked me to lie down. I went flat on my chest with my hands covering my face. Since I felt my face secured, I decided to blank everything from my world expecting the merciless cable to start descending on me. For what seemed like a minute it didn’t come. Shout s came from fellow students. I thought one or all of them had committed another “irresponsible behaviour”. The postponement of punishment was not good for me. It was like the relaxation of a donkey with a heavy load on its back..

I looked up when I heard footsteps rushing out. Mr. Kawu stood where he was before I lied down. He stood like a soldier keeping watch over me, but he was shaking. The hand that held the cable stood in the air together with the cable. No, the cable was not in the air. Its tip was at the bare tips of some tangled wires above. He was getting elec.. electrocuted. At least that was the name they called it before locking me up.

Next week they said they would come and see if a week’s hunger will make me to leave witch-craft. If not, I will be like Onome. I don’t know whether I am a witch or not.

Before two days, two people in white garment come and take me out of the dark room. They say they are men of God. They say they come earlier because if I am a witch, I will get provision from spirits. I will not be hungry. I will not say the truth. Now, they will frighten me with bodily pain.

this story was written by Abdulwasiu Hassan