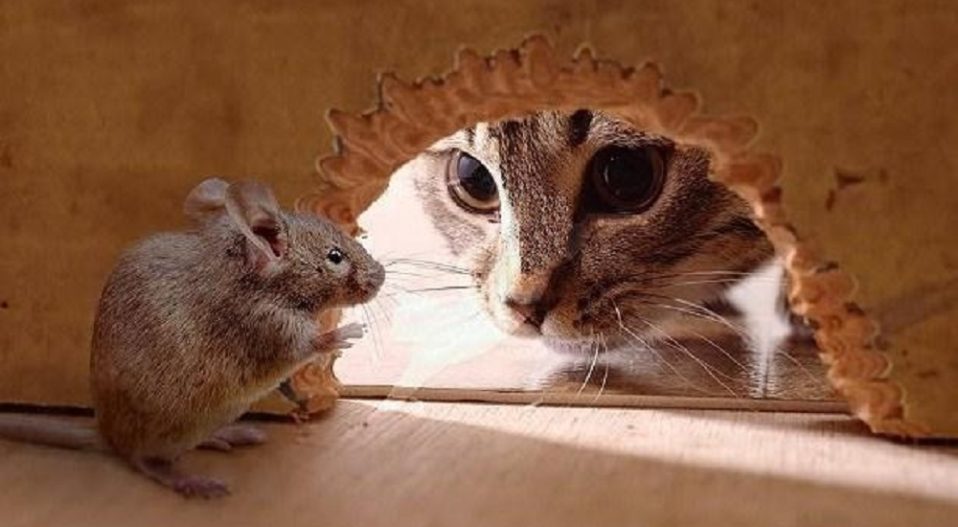 WHAT KATIE HAD TO SAY

It was a fine sunny day
that an old giant cat came to where I lay
she said, “Are you the Mister Theophilus
that wrote for the three mice and made them famous?( I said yes)
well, they gave you nothing but a bunch of lies,(I asked, “Nothing less?”)
may they rot in hell, those three malicious mice!
I was that kitten now a wrinkled cat
yet fresh is still the feud with mice, even with rats!
now pen this, for it’s the truth, delay not”
her look was menacing, her claws sharp, that I hastily said, “why not?”

“I was lying, a cold kitten, on a piece of rag,
when came along three old spinster hags
from the bar they were returning, so gay
they spotted me and one said, “A sport for all our days!”
and so it happened that cat both and rag,
with the butt of a baton and not a few kicks
we were bundled to their god forsaken hole
where Dorothy gathered dried leaves and sticks
and made for three, black cinnamon rolls.

while at a corner I lay shivering, almost asleep,
Pamela came tip-pawing, that playful creep!
she dragged us both, cat and rag
(may she rot in her grave, that hideous hag!)
dragged me and further tore my attire
and pushed me, almost into the fire.
she said, “Be warm, then play me some sport,
twirl on a paw, squeak and snort”.
I soon felt fine,
and being famished, I began to whine.
Pamela shouted, “Lazy thing, stop the incessant yawns,
play me some sport, or I throw you across the lawn”
(though a kitten, I was bigger than she,
perhaps she had forgotten I was bigger than all three).
but then I doubled over and whimpered,
and Pamela suddenly flared!
she punched me in the ribs,
and I flew, hitting Stella’s crib.
the punch provoked poor Katie(of course that’s me!)
and I began chasing her round the settee.

There was such great commotion,
that stern Stella with her glasses
came out, with great indignation
and she blindly dished out lashes.
as she did, eyes closed, she cried shrilly,
“KAAATIE DON’T BE SIILLY!”
a stroke caught me above my left eye
(Ah, what happened next? Oh, my!)
I arose with an unheard of rage,
made a leap too great for my age,
caught Stella in my left paw, Pamela in the right,
took their tails and tied them tight.
while doing this, Dorothy came in with a pail,
and she wet me from head to paw.
this was the last straw
that broke my poor back
for suddenly my whole body went slack
and I fell down, shivering on the cold floor.
seeing this, all three beat me till they could no more
then they dragged my unconscious body
and dropped it in the professor’s study.
they then dusted their paws,
did high fives and had a round of applause.

Thank heavens, the professor found me
and wanting company(a widower with no kids), he adopted me
he cared for me and I got well alright
daily milk led to an increase in size and might
the little vengeance I could afford(those three hags and some others), I did
(but you know, this world is by mice crowded)
and being aged, in each newborn kitten I inculcate
the feud between us and the mice race”.

Dear friend, what dilemma is this?
which do I believe, this or the other piece?
well, you read both and judge the case
do settle the feud between the cat and mouse race.

THE MICE AND AN UNGRATEFUL KITTEN

Three old spinster mice,
thought they ought to be nice.
they found a cold kitten,
and they didn’t stop to reason.
they took her to their hole,
and Dorothy brought milk and rolls.

The kitten soon felt fine,
and she began to whine.
Playful Pamela peeped in her crib,
and poked her in the ribs.
it seems she didn’t know the adage:
one man’s fun is another man’s rage.
the poke provoked Katie Kitty,
and Pamela was deeply bitten.
Pamela gave out with a groan,
for the wound showed her bone.

Stern Stella with her glasses,
came out hoping to give lashes.
she said, `Katie, do be still!’
and Katie’s eyes became steel.
she made a most mighty leap,
and landed all claws on Stella’s hips.
Stella gave out a crow’s cry,
and scurried off, wishing she could fly.

Dorothy, being a doting one,
came out, holding a creamy bun.
she called, `Katie come have a bite’,
and oh! she did have a bite!
Dorothy’s hand was bitten with the bun,
and oh! my, could Dorothy run?

while their rage was still seething,
all three decided to hold a meeting.
an idea struck them so meaty,
and they evacuated Katie.
they then signed a treaty,
never to be nice, but creepy.
so the mice in your houses are sneaky,
’cause on the ancient wall hangs the treaty.