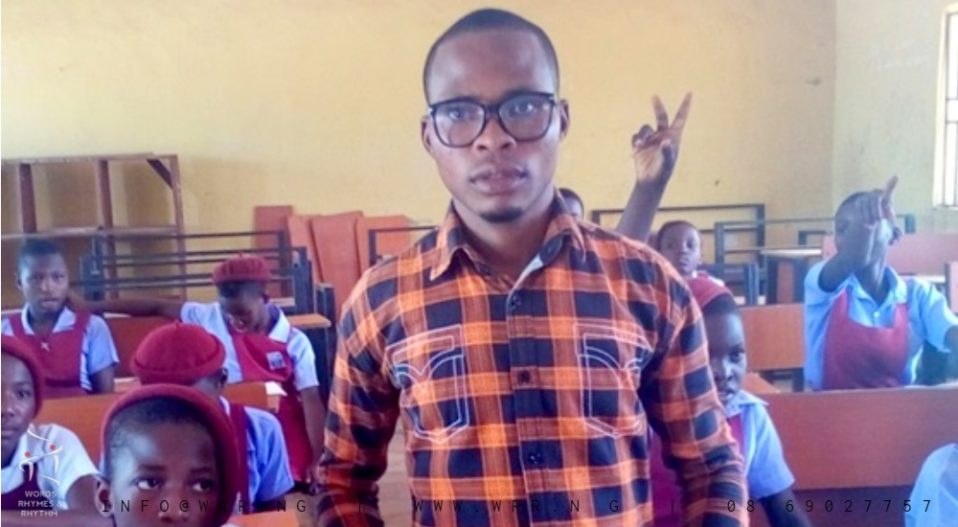 He will be awarded a certificate of recognition and a token N10,000 cash by the CEO of Words Rhymes & Rhythm, Kukogho Iruesiri Samson, in appreciation of his laudable efforts.

Those who nominated Nwokpoku for the award had this to say about him:

“Sam Chukwudi Nwokpoku is an intelligent and dedicated teacher of English Language and Literature. When we were working in Noble Secondary School, Onyikwa Alike as teachers, he introduced a drama club named Noble Actors Guild ─ a platform where he taught the students drama performances. He also introduced a poetry reading platform named Poetryologue ─ where he read and performed poetry for poetry lovers. Because of his profound impacts on the students, the Proprietor of Noble Secondary School, Onyikwa Alike made him the principal of the school, until he left for Community Secondary School, Ndufu-Alike, Ikwo where he currently teaches Literature-in-English. He is a young man who is not displeased by the fact that he teaches in a rural area. He is a youth mentor.

“I nominate Sam Chukwudi Nwokpoku for the 2017 Nigerian Teachers Award because of his laudable disposition in teaching, not only his students at school, but also his fellow youths. I personally call him a “great teacher”. Perhaps this is why his former employers, Noble Secondary School, Onyikwa Alike, still consult him for extramural classes on English Language and Literature.”

Sam Chukwudi Nwokpoku is a Nigerian teacher, poet, and songwriter. He holds a Nigeria Certificate in Education (NCE) in English and Igbo Languages from Ebonyi State College of Education, Ikwo and is currently pursuing his degree at Nnamdi Azikiwe University, Awka. Nwokpoku has taught English Language, Literature-in-English and Igbo Language in many schools in Ikwo and Ezza Local Government Areas of Ebonyi State.

As a writer, his works have appeared in some poetry journals, magazines and anthologies. He is also involved in the promotion of Literature in his state, and is presently the Lead Representative of the Abakaliki Connect Centre of the national poetry movement, Poets in Nigeria (PIN).

Also noted for honorable mention is Mrs. Belaguh Kate who taught English Language and Literature-in-English at Federal Government Girls’ College, Gboko, Benue State, for many years. She was nominated by her former student, Ogwiji Ehi-kowochio Blessing.

The WRR NIGERIAN TEACHERS AWARD (WRR-NTA) is an annual prize sponsored by Words Rhymes & Rhythm to recognize and reward Nigerian teachers for their contributions to the development of education and the literary industry.

At Words Rhymes & Rhythm, we strongly believe, as Solomon Ortiz rightly said, that “Education is the key to success in life, and teachers make a lasting impact in the lives of their students.” Unfortunately, in Nigeria, as it is in many countries, the teaching profession is often viewed as a second class profession and teachers are regarded as second-class citizens with poor remuneration and low social respect.