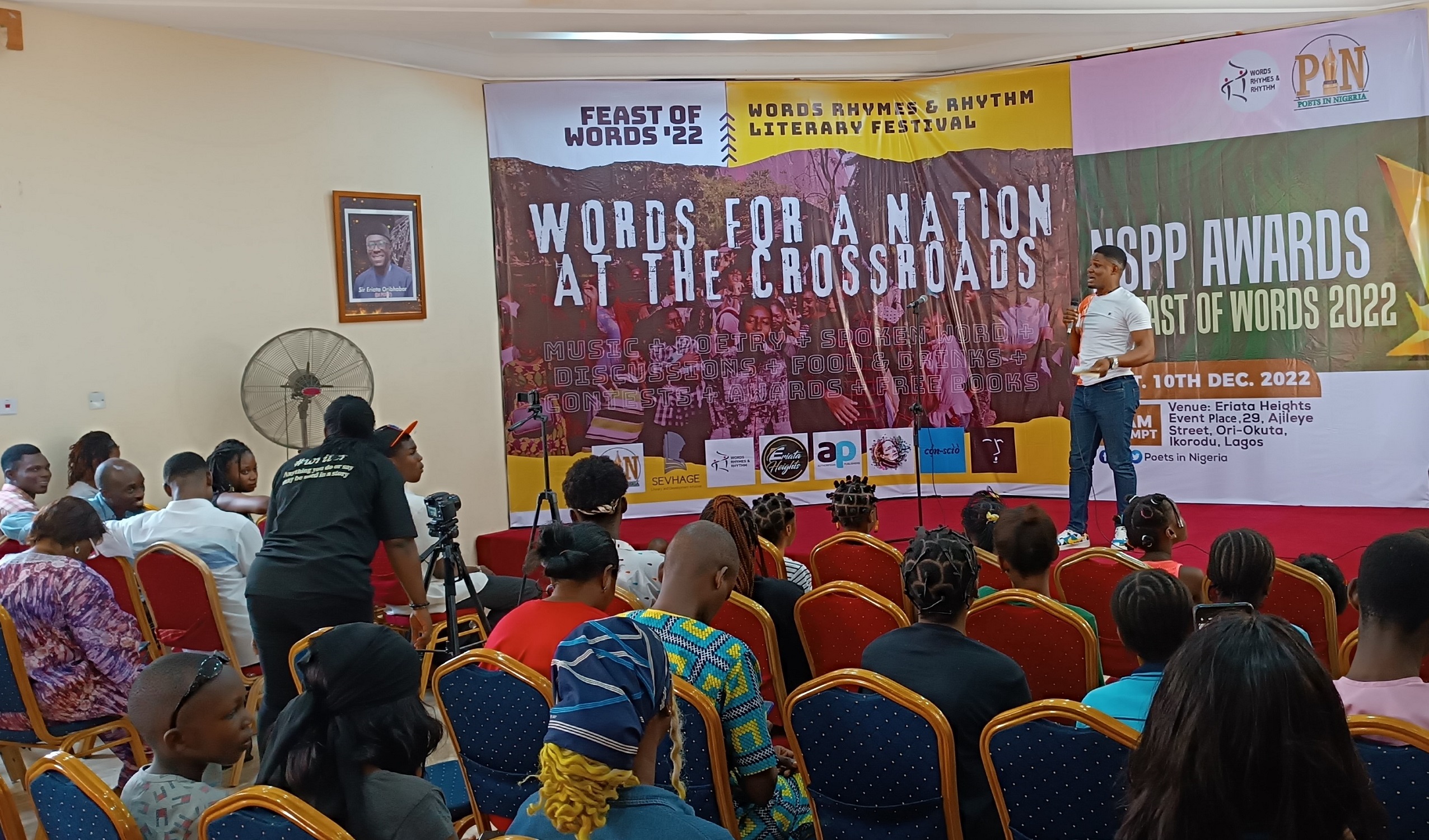 Feast of Words 2022 was a fun-filled day of unbridled creativity featuring multi-genre performances by artists of all ages, insightful discussions, awards presentations, book fair, and an African night of traditional performances, palm wine and local delicacies.

Words Rhymes & Rhythm (WRR) has maintained its commitment to promoting artistic and literary creativity with its Feast of Words (FOW) annual literary festival. Themed ‘WORDS FOR A NATION AT CROSSROADS’, FOW 2022 left an indelible mark on the Nigerian literary scene on December 10, 2022.

Continuing the FOW tradition, which started in 2015 at the University of Ibadan and has become a major annual highlight in the literary year of Nigerian creatives, the 2022 edition which was held at Eriata Heights Event Place, Ikorodu, Lagos State, welcomed different forms of art and created an ambience for the expression of creativity and friendship. It was a fun-filled day of unbridled creativity featuring multi-genre performances by artists of all ages, insightful discussions, various awards, and an African night of traditional performances, palm wine and local delicacies.

FOW 2022 started with a welcome address by veteran poet, arts administrator and President of the Poets in Nigeria Initiative (PIN), Sir Eriata Oribhabor. Sir Eriata lauded the festival’s colourful history and impact on the current generation of Nigerian writers over the years. He applauded the organizers for their consistency and selflessness despite the considerable financial demands.

Immediately after the welcome address, WRR CEO and award-winning author and art administrator, Kukogho Iruesiri Samson, delivered his opening remarks. In these remarks, he explained his motivation for convening the festival and highlighted the activities scheduled for the day, reminding the audience that the core ethos behind FOW was fun-imbued arts, creativity and friendship.

The day’s creative activities started with the first open mic session where several participants gave various poetry, music, and dance performances. Following those was a panel discussion on “Art for Art’s sake vs Arts for Social Good” moderated by WRR COO Kolade Olanrewaju Freedom. On the panel were poet-activist AJ Dagga Tolar, Kukogho Iruesiri Samson, and renowned author and social campaigner, Awodiya Funke. In summary, the discussants agreed that art must first be art before anything, but all creative works have inherent social value irrespective of the aim of the creatives.

The discussion session was very interactive, with various members of the audience including writer and public servant Opeyemi Oluwadare-Oso, broadcast journalist and writer Topelizbeth Stephen II, and engineer-poet Jide Badmus, also airing their opinions. Some argued that creatives should be allowed to do whatever pleases them with their work. Others, however, believed that art must be deliberate in messaging. It was difficult to draw a curtain on the discussion session due to continuous contributions from the audience.

FOW 2022 provided ample opportunity for creative expression. Seeing budding creatives—some as young as 5 years old—announcing themselves as the oaks of tomorrow was very rewarding.

Young performers aged 10 and under from Adekunle Oguntoyinbo Shola’s House of Phebe Arts enthralled the audience with their exhilarating dance and oratory prowess. Other notable poetry, dance and musical performances were delivered by Paul Abiola Oku-ola, The 78th Psalmist, Yusuf Alabi Balogun aka Aremo Gemini, Victory Gburuke Ngei, Damilola Makinde (The Musical Being) and many others.

Another exciting highlight in the day session of the festival was the On-the-Spot Oral Contest which took the form of a talent hunt judged by renowned poet Jide Badmus while the audience feasted on jollof rice and cold drinks. The contest witnessed exciting performances from both budding and established singers, spoken word artists and poets in a fierce battle for the N10,000 cash prize. Iyanu Sholaja, a very young and talented spoken word artist who attended the event with her mother, emerged as the winner to the absolute delight of the audience and her co-contestants.

In conclusion of the 2022 edition of the Nigerian Students Poetry Prize (NSPP), the largest prize of its kind in Nigeria, PIN held the Nigerian Students Poetry Prize (NSPP) Awards 2022 to honour the winners of the Prize. NSPP moderator, Kolade Freedom, delivered a presentation on the administration of the Prize from the opening of submissions on January 15 to the conclusion of judging in December.

Crowning a very successful FOW 2022 was the evening session tagged African Night which started around 4 pm with brief opening remarks by Kukogho Iruesiri Samson. The setting, an open space, within Eriata Heights Event Place, was culturally adorned with mats, palm fronds, oranges, palm wine, raffia hats and gourds. It was an ambience that favoured the crafts of the performers who took turns to stimulate the interest of the audience.

Among the performers at the African Night were the internationally renowned Yorùbá poet storyteller and troubadour Aremo Gemini, Sir Eriata aka Merchant of Poetry, and Luqman Onike aka Òlukùmọ̀, an orator par excellence who renders social transformation poems rich in Yorùbá imagery, sayings, and social mores.

Aside from satiating the ears of participants, the stomach was also well catered for—as is the Feast of Words tradition—with palm wine, amala and ewedu and eba and egusi making the rounds. True to its name, the evening session merged African cultural beauty with artistic excellence to create a memorable ending to FOW 2022.

As darkness closed in on the day, friendships chirped amid an art-imbued ambience.

For the seventh time, FOW has made its mark on the Nigerian literary scene.

Get more photos from the FEAST OF WORDS 2022 Literary Festival HERE & HERE.