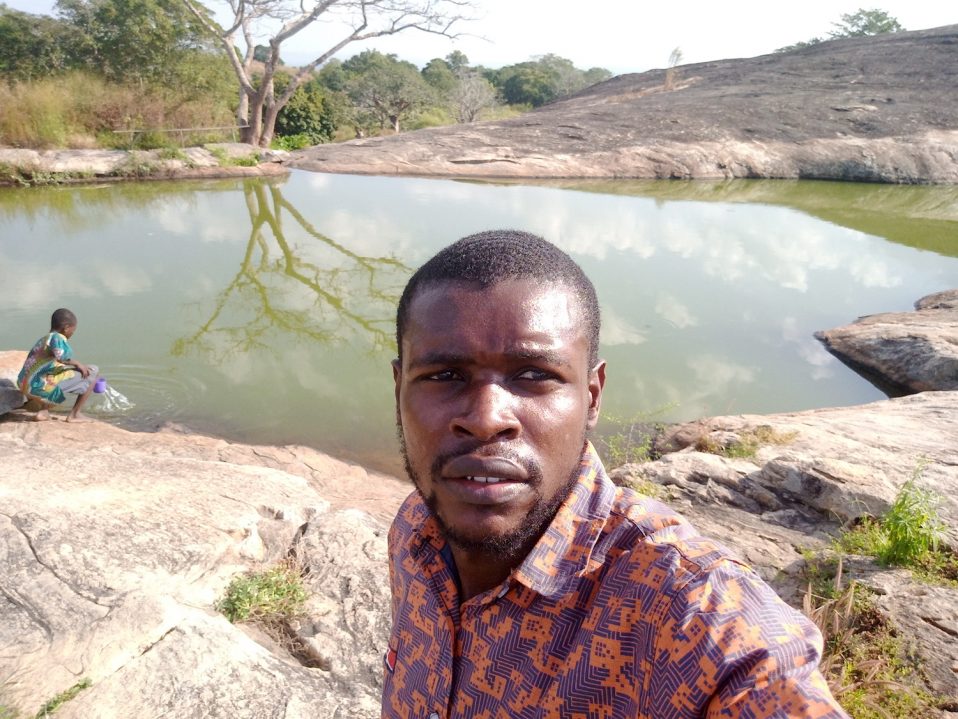 For the past three years, we have tried to hold the annual Words Rhymes & Rhythm (WRR) literary festival – Feast of Words (FOW), in a natural environment or tourist sites. The idea was to tap into the natural ambience in such environments and morph the literary festival into a literary picnic where participants would be able to express in sync with nature. Issues of cost and logistics have made this impossible in the past. This dream will now become a reality as we hold FOW 2019 at Ado Awaye Suspended Lake, Iseyin Local Government Area, Oyo State, Nigeria. As part of preparations, WRR Chief Operating Officer (COO) KOLADE OLANREWAJU FREEDOM visited the lake and shares his experience to prepare the mind of those coming for the festival on 7th December 2019.

On a quiet Saturday morning, I boarded a bus heading to Iseyin, thinking Ado-Awaye Mountain was within the town because Google had consistently blurted out “Iseyin” at every “Ado-Awaye” search. A male passenger, fortunately, enlightened me on the actual location of the place:  I would need to get another vehicle at Iseyin to Ado-Awaye. The road from Ibadan through Iseyin is in a terrible state of disrepair. This made the journey awfully long. It took about 2 hours, 30 minutes to reach Iseyin where I boarded another vehicle to Ado-Awaye – a 30 minutes’ drive. (I would later learn that there was a better route via Eruwa town to Ado-Awaye).

On alighting at Ado-Awaye, my eyes immediately picked out the Ado-Awaye Mountain, seated monstrously beyond a mildly busy market situated at the heart of the town. The mountain’s location, behind a cluster of residential houses, gave it the air of a watchful, impenetrable guard. It was so magnificent a sight that I forgot my stressful journey and began taking pictures of the mountain while waiting for my contact, a local, to arrive.

My contact person – named Wasiu – arrived on a bike and we proceeded to the point of entry into the Ado-Awaye Mountain area. We spoke about how the tourist attraction could host the fifth edition of our festival. At that point, I was eager to start hiking, because my mission was to ensure that the Mountain and its lake could serve our intention. Wasiu was, however, hesitant to serve as a guide; he was more interested in coming to an agreement about the modalities (financial) towards securing permission to use the place.

After some negotiations, we reached a stalemate on the fee to be charged. They wanted WRR to pay N500 per head and we wanted a covering, reasonable fee for everyone since the festival is a literary, non-ticketed affair. While negotiations stalled, Wasiu obliged my request to climb the mountain first and he asked another local – a boy between the age of ten and twelve – to be my hike guide. I was stunned: dis small pikin?

Under ten minutes into the journey up, my backbone and knees started protesting. My feet no longer negotiated the man-made steps leading to the top of the mountain with ease; my enthusiasm fizzled. Surprisingly, my guide seemed as alive as ever, flying up the steps without difficulty. At that moment I realized that Wasiu had slyly avoided being my guide because he wasn’t ready to undergo such stress on a hot afternoon.

The boy had to wait for me to catch up several times. I had to prove to him that I was no ‘ajebo’. Shunning the pain wracking my body, I increased my pace and soon kept a steady gap between us. I caught up with him at an area where the mountain was a bit level. I immediately sighted a boulder with a white cloth tied around it, indicating that it had some spiritual significance. We stopped there for a while and rested under the shade of the boulder. I made a mental note that we could set up a base camp for the festival there.

At this point, my palm slippers were worn under my feet: I had made an awful choice of footwear. This did not stop me from taking a few moments to savour the breathtaking view from where we stood – a panoramic view of the wonder of nature which opened before me on the mountain. It was surreal! Once again, I couldn’t resist engaging my camera. Soon we resumed our trip and walked for close to half an hour before sighting our target: Iyake Lake – the only recognized suspended/hanging lake in Africa and the second in the world.

The guide drew my attention to the presence of small sea turtles in the lake, but all attempt to capture them proved abortive as they shied away from the surface having sensed human presence. I noticed the names of spiritual tourists inscribed on the trees and cactuses around the lake.

While I was admiring the lake, the boy filled his water bottle from the lake and urged me to do the same; I declined.

“This water has spiritual powers,” he declared. “Barren women come here for solutions and return to share testimonies within a short time.”

He however, warned that I shouldn’t dare think of swimming in the lake. He also pointed out a marked hole close to the lake and said:

“If you deep your leg in this hole, just one leg, you will find yourself in Iyake Lake and get drowned.”

I wanted to scoff, but seeing that the hole was ‘fenced around’ with short sticks, I heeded his warning. From all indications, it was out of bounds and foolhardiness could be very costly. It was better to be deceived and be safe than attempt to prove deceit and be consumed.

My guide had a lot of tales, anecdotes and important things to show me. But I was unwilling to hike further knowing I would have to return to Ibadan that day. When I asked that we return to the ground, my guide insisted that we needed to see an elephant.

“You mean there is an elephant on this mountain,” I asked astonishingly.

“Nooo,” he replied excitedly. “It is a fallen tree shaped like an elephant.”

I had to see this elephant tree. So we went further. The tree was indeed an ‘Elephant’. It was clear to the eyes and, truly, no other title could be more befitting. I was still wondering at it when my guide clambered up the tree and asked me to join him.  I declined; I would ride the elephant another day.

On our way back we saw three persons, Christians, by the Iyake Lake. They were making supplications on their knees. The boy pointed to them as the indisputable proof of the truth in all he had said before. As we walked he told me of another place of interest on the mountain – Omi Iya Alaro. He explained that many years ago when people still lived on the mountain, they relied on Omi Iya Alaro for the washing and dyeing of their clothes. Again, he convinced me to follow him there. Unlike Iyake Lake, Omi Iya Alaro is completely covered in green algae.

READ ABOUT FEAST OF WORDS

“Awa ti tedo sibi, awa ati ye (we have found this place, and have survived),” my guide declared while explaining the history behind the naming of the town. According to him, the people first moved up the mountain to escape the wrath of their enemies in the time of war. The mountain gave them the advantage needed to vanquish their enemies and win the war so they could return to the base.

Impressed with how well the lad had discharged his duties, I asked for his name – it was worth keeping in my memory. Sunday was his name. I also asked about his career interests, and he took no time replying: “photography”. I was least surprised, isn’t nature photography’s first calling? I encouraged him to believe in his dreams, and do his best to make them come true.

While descending the mountain we met two other persons making their way up, panting and sweating. They repeatedly acknowledged the greatness of Allah with laboured breaths. Apparently, they were also there to tap into the spiritual atmosphere of the mountain. May I declare that Ado-Awaye is a place where Divinity kicks spurious theories and declares: I AM? Yes, I have declared so.

Descending wasn’t as daunting as ascending. Was I stronger? Had the place changed me or empowered me? Had my eyes taken in so much beauty that nature flowed in my veins? Did I become one with the place? Or could it just be that I had mastered the art of concealing tiredness in a bid to let Sunday know I was no ‘ajebo’? Whatever it was, I descended gracefully…

I think my experiences at Ado-Awaye cannot be captured in words. I can only say it is one I will want many – especially our FOW regulars – to be part of. Come December 7th 2019, I will compare notes with those attending FOW 2019. I am sure the Wonders-in-Residence will demand a high price of sweat from everyone but pay them in the currency of nature’s love.

2 thoughts on “ADO-AWAYE MOUNTAIN & SUSPENDED LAKE: A VISIT TO THE VENUE OF THE FEAST OF WORDS 2019”