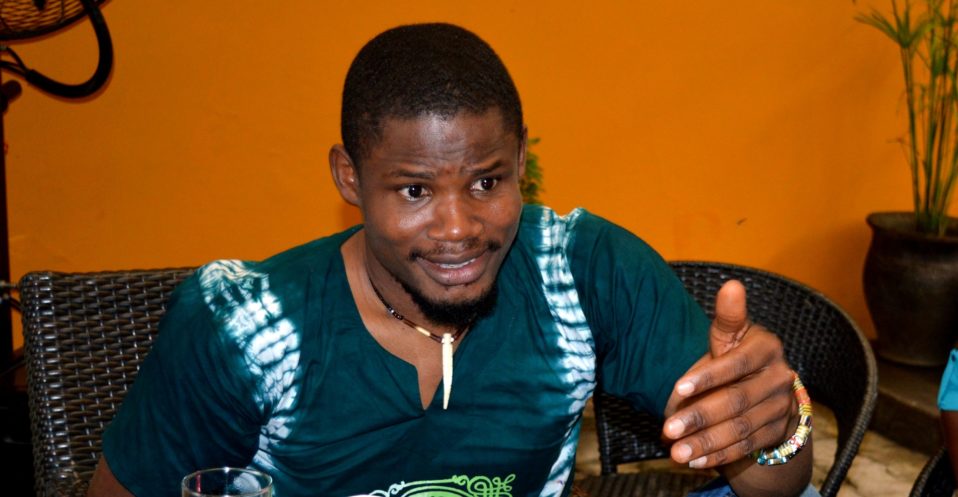 With two published poetry collections and a massive social media poetry movement called WRR, Kukogho Iruesiri Samson has established himself as a poet of note in Nigeria. He talks about his art and the state of poetry in the country. Kukogho Iruesiri Samson (KIS) is a notable poet with two published collections, ‘What Can Words Do?’ and his recent effort ‘I Said These Words.’ He started Words Rhymes and Rhythm (WRR) on social media and it has grown into a poetry movement and now a publishing outfit. In this interview, the author, known for his passion for poetry and its development, talks about finding poetry and the things that have shaped the kind of poet he has become.

Two poetry collections and a poetry movement, what was the trigger for this and what fired your passion for poetry?

I discovered poetry very early. If I’m not mistaken, it was ‘West African Verse,’ a collection of poems featuring several African poets. I was in primary school then. I loved poetry right away, but did not start writing poetry until almost 10 years later. I was encouraged to take it serious by an NYSC member who taught English in my school. My biggest push to write poetry came while I was an undergraduate at Ahmadu Bello University, Zaria. I stumbled upon a section where poetry books gathered dust and I got immersed in them. That was where I got my structured poetry style.

But more importantly, I had a troubled childhood and ever more troubled teenage years and early adulthood. I needed to talk and I soon discovered that poetry was the best way for me to express myself.

When you say troubled childhood, could you explain what happened?

Well, when I said a troubled childhood and early adulthood, a lot is involved. How else do you describe growing up in a broken home, and then living with a malevolent stepmother while battling with poverty amidst plenty? I grew up very early to be able to make a head-start in life, fending for myself in the university while trying to stay top of the class with often empty stomach. Poetry gave me a voice to express my discontent. If you read ‘What Can Words Do?’ you’ll understand. ‘I Said These Words’ will buttress the point further.

Your first poetry collection ‘What can words do’ has some 60 poems talking about a range of issues. Is this a reflection of your eclectic social concerns?

Yes, I have concerns about society. You could say I am a socialist of sorts. I am troubled at the issues society is ignoring – poverty, religious extremism, predatory politics, corruption, domestic violence, earth’s destruction, youth negligence and the disregard for human life as evidenced by war and other forms of violence.

Still talking about these social concerns, your poetry talks about gender-based violence and politics among others; it is clear you believe in the efficacy of words in making a change in society?

Believe me, I am a believer in the power of words. A lot of things are as wrong as they are because writers have become more artistic than purposeful. A writer is an artist and must stay true to inspiration and style. But I respect artists who get to a point where art and purpose become one. My poetry has gotten to that place where I hit on dangerous nerves with a surgeon’s precision and a butterfly’s grace – art and purpose. If writers were to continuously remember their social responsibilities, which can cut across any sphere of life, then words can change society. Religious texts are words, are they not?

You bring the same tone of social critique to your criticism of poetry. Why this uncompromising approach, especially with regard to literary critiques?

I grew up with bluntness in the person of my father and that must have rubbed off on me. Concerning critics, I believe that anybody who must critique an art must have more than a pedestrian idea of it. I would criticize a surgeon’s procedure as a poet, same as a carpenter should not be hassling a chef in the kitchen. Why? We have no knowledge of it. Same with literary criticism. Before you sit down to critique a poem, you must understand the basic idea of poetry and the writer’s own style. What you’ll find in my poetry may not be found in others’. Our understanding of words, metaphors and meanings differ, same as our presentations of them. So a creative work must be viewed as itself and an extension of the maker. To assess a poem as a layman is different from assessing it as a critic. A critic should know better.

Do you think the paucity of literary criticism has engendered some kind of intellectual laziness among Nigerian writers or encouraged the celebration of mediocrity?

I don’t think it is the paucity of literary criticisms as much as the absence of informed criticism that is causing intellectual laziness. Again, I don’t think there is intellectual laziness per say. What I think is happening is that writing has become a free-for-all. Unfortunately, social media has thrown the opportunity of being heard to everybody – including those who, in my opinion, lack the skills of a writer. Added to the problems is the near-death of traditional publishing and the emergence of random self-publishing outfits which go the GIGO – garbage in, garbage out.

You have been using social media a lot for your outreach and one of the criticisms of posting literary works on social media is that the authors expect praise rather than constructive criticism. To what extent do you think this is true?

Every person who writes wants praise not criticism. Even writers who use editors pray for less criticism and more endorsement. That said, I think most people don’t understand the evolution of the writing industry the world-over. Writing is no longer a rigid field for a few people. It is now a way of living, thanks to the advent of social media (and the internet in general). Writings posted on social media have been published. Yes, it is publishing of sorts. Editors have been done away with and the writers are not looking for awards, they are looking for comments to boost their egos. I see nothing wrong with that, provided it stays on social media as informal writing. When the time comes for a book, then an editor and critics are invited. That said, I think 90% of those whose works catch my attention don’t mind my sometimes caustic opinions because I make tangible observations and suggest solutions as against the usual blanket and abstract comments.

What is wrong with Nigerian poetry?

Well, I wouldn’t really say there is something wrong. To say so would be to stand the risk of being seen as dismissive of the recent changes. Like I said earlier, everybody is writing. Unfortunately, not everybody takes time to study the art before writing. After all, ‘all you need is to write what you feel.’ But poetry is an art with a history. All the rules have been thrown out. So, now we have a lot of prose sentences broken down into verses and called poetry. That is what is wrong.

And perhaps you could now tell us what you think is right with Nigerian poetry?

Everything is right with Nigerian poetry. I mean, some years back, we poets had to find an audience in foreigners. You would write in a book and paste on school notice boards to get a few readership. It was nonsense that only a few appreciated, and even then only love poetry was popular. Now everyone is interested, thanks again to social media. Poetry is everywhere. Almost every institution hosts at least a poetry/spoken word event annually. That is great.

Your second book, ‘I said these words’ came out in November, 2016. What can you tell us about it? How different is it from your first collection?
From the title you will see a shift – ‘What can words do?’ is a question of the efficacy of words in expressing my inner demons while ‘I said these words’ is an affirmation of what I have said. I have journeyed from the experimental to the definitive. In my latest book, my creativity and purpose were in full sync. It is the next step in the journey. By the way, ‘Words of Eros’ and ‘I Only Have Words’ are in the works.

From your experience publishing poetry in Nigeria what have been the challenges?

The main challenge is cost. The cost of publishing is rising and convincing authors to part ways with money for a good job is hard. But even more disturbing is that many poets don’t see the need to pay for editing. They think the poet can start and finish the process. I think otherwise. As a matter of fact, WRR has turned down some terrible manuscripts which the author refused to have edited, even though it is self-publishing. I also have a problem with poets that want to squeeze a million poems inside one book.

Is KIS a perpetual, irredeemable poet or is there a prose work you are experimenting with?

I am a perpetual and irredeemable poet. Yes. But I also write prose. I actually started writing short stories long before I started writing poetry. As a matter of fact, I have a finished novel and two plays. Publishing a novel is a little bit harder. My novel, titled ‘Devil’s pawn,’ is a thriller. The first draft was completed in 2010 and I am still cutting here and there. I also have a number of short stories, most published online.

Being that you work with upcoming poets a lot, what advice do you usually give them?

Read. Write. Research. Repeat until you die. In writing, practice makes perfect. Keep reading and writing and you’ll get better.

Next post AUTHORPEDIA CHAT: "Literary prizes do not define a writer’s worth” — AYOOLA GOODNESS OLANREWAJU