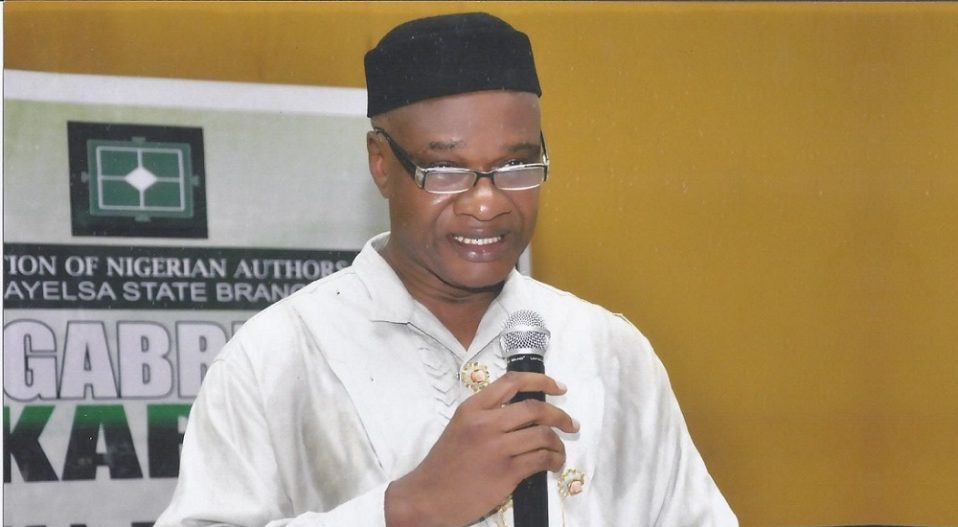 Emmanuel Ayibaemi Frank-Opigo, an engineer and a poet, is the Director of Works and Services at the Niger Delta University, Bayelsa State, Nigeria. He was the Chairman of the State Branch of the Association of Nigerian Authors (ANA) from 2013 to 2015 and is still the Editor-in-Chief of the Branch magazine THE MARINER.

His latest book, VOWELS IN THE AIR, was published by Words Rhymes & Rhythm Ltd in June 2016. His other works include ‘Masks and Facades‘ (poetry) and ‘Clean Your English‘ (a text on common errors).

The title of your recent publication, ‘Vowels in the Air’ is immediately compelling, albeit being a bit abstract. Can you tell us about it, and how you came about going it that title?

“Vowels in the Air” was taken from a poem by former U.S. President Jimmy Carter. The preface in the book explains how I came to choose it after discarding a handful of other options. It is actually not abstract, when you consider that all speech is hatched on vowels.

Very few writers can boast of a very rich professional career like you, having been an academic, a politician, and career engineer. How do you manage to mix this up with writing?

Both in Nigeria and elsewhere in the world, writing has never been a preserve of those who studied literature.  Once the passion is there, the time naturally comes.

As far back as 1976, you made an attempt at writing Nigeria’s National anthem. Is it right to assume then that you are a patriot?

I am a patriot, but not just because I entered for the National Anthem competition.  I saw it as practical poetry, and gave it a shot.

The two are inextricable. Even when you think you are doing Art for Art’s sake, there is always something “in between the lines,” deliberate or not, that makes a statement.

Tell us about your sojourn into the literary world? Who were your earliest influences? What were your favorite books and authors?

My interest in literature dates back to primary school.  My first attempt at writing was in my first year in secondary school.  I began to blossom about my Class four.  Our standard texts all influenced me, but I ventured to read anything that came my way: Shakespeare, Achebe, Amadi, Ekwensi, Soyinka, Ngugi, etc, etc

As a long time member and official of the Association of Nigerian Authors, do you think the body has done enough for Nigerian writing and writers?

The fact that ANA exists at all and holds conventions every year is already a great achievement as that maintains a minimum inspiration for up and coming writers.  A lot more can be achieved through innovations, and we shall continue to advocate as necessary.

In Nigeria, winning literary prizes has often been seen as a measure of a writer’s worth. What is your take on this? Have you won any in the course of your long writing career?

Prize-winning as an indication of literary worth is worldwide, and not just Nigerian.  However, while there can be only one (or sometimes joint) winner at a time, there might have been several equally good entries for the same competition.  Yes, I won the maiden poetry prize of the Rivers State Branch of ANA in 1995 with my collection “Frothy Facades” (now re-titled “Masks and Facades”).

How would you assess Nigerian writing, especially in terms of development of writers, quality of writers’ outputs, as well as promotion and readership of same published books? What can be done to improve it?

Nigerian writing is currently an iceberg.  The really good stuff above the water surface is not much, but the bulk below water indicates the level of enthusiasm.

This can be worked upon through serious workshops, etc.  But ultimately, the writer is responsible for his or her own development, and the very first step is OBJECTIVE SELF-ASSESSMENT.  This is where many aspiring writers fail.  They think anything they put down is Nobel Prize material, and yet you find errors on page 1.  Promotion and readership are a big problem – even we writers hardly read the works of our contemporaries! Improvement will start with improved works.

Do you agree with those who say the government has a role to play if the retrogression being experienced in the Nigerian publishing sector is to be reversed?

The government does have a role to play.  If preferential tariffs can be placed on printing materials, the private sector can take it from there.  However, the readership problem must also be tackled in tandem with this.  Let us study the success of the “Pacesetters” era (1980s) and see how we can bring back the book.

Do you have any other work coming out soon?

I have a memoir of sorts that has been ready since 2015.  I also have a novel manuscript written in 1986, and a couple of plays written in secondary school in the 70s.