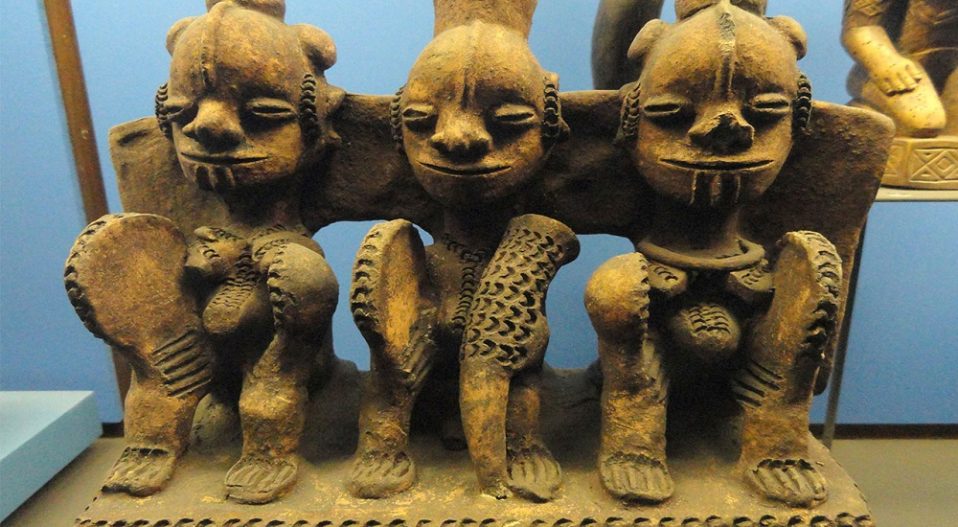 What is happening to Igbo language and cultures and traditional religion? Do we allow it to go into extinction? Do we allow that as a nation? Everywhere is smelling white men, yes, everywhere!

Growing up, I saw no shrine in my father’s compound. I saw no native doctor or fetish in our family compound in Nkporo. But the worst of it all was that I didn’t see him in the church until his death in 2004. He was never a Christian or a Muslim or a pagan but he worshipped the Supreme God above.

What I saw him doing sometimes was that whenever one of his children came back to see him at home in Aba, they usually bought him seaman Dry Gin. He would open it, pour small into a cup and pour on the wrinkled ground to bless his ancestors’ names and commending their ancestral spirits to bless that son that paid him homage. It was just a libation and that’s all.

He broke kola nuts together with his kinsmen in Nkporo and we all saw him blessing his “chi” forgiven him long life whenever a visitor from Nkporo came to visit him in Aba with a bottle of Schnapps. Then, although we never agreed to each other until his death, I would always sit far from him watching him do all these things. He was full of himself. He believed in the Supreme God above who is ““, “Obasibinigwe” he believed in him as the giver of life and his guidance and protector.

He was proud of where he came from, Nkporo. I learned of Nkporo cultures from him before I beheld the land. I could remember he told us that we would be taken to the Agbala for the “Ipu Agbala” so that we would belong to the caste system. Someone like me disagreed with him. I could remember he taught us that a man never forgets his root. He said the only thing that keeps a man going is knowing where he is coming from and where he would be buried when he dies. Each time I hold Things Fall Apart by Chinua Achebe, I see my father in there. I compared him with Ezeugo and Ezeulu. They have similarities, they share many things in common.

Later, I came to realize that he was never condemned by these people like other Pentecostal churches do. He was never told to abandon whatsoever he believed in to follow Jesus Christ but he was told how this Jesus Christ loved him and each time he was told that we always see his face full of smiles.

I had a father who showed us the way of the African traditional religion if not directly but he did that indirectly to me particularly. I met him at old age, a scare that still hurt me now and would continue to hurt me forever because then, I disliked him because of the many wives he had to himself and many children he gave birth to and was not able to give them a reasonable life. I disliked him for not given us the life he ought to have given us. Sorry, if I’m getting you scared.

We never agreed with each other until his death. Even that morning when every one of them was wailing and hitting themselves on the ground, a tear never dropped from my eyes. Then, he used to tell us how the gods guided them throughout the Civil War. How they gathered in a cave to hid themselves from the Nigerian Army.

He planted a long lasting tradition and culture in my heart, I don’t know of others. I could remember the first time he called me to give his visitors drink from a bottle of Dry Gin, I could remember how he shouted at me for using the wrong hand to hold the cup and the bottle of the Seaman Schnapps.

I remembered it all. I could remember after his death I went to the eldest of my step brothers to ask him of our lineage, our root. I could remember how he laughed at me because then I have never made some research on that. He didn’t tell me that, even the name of our family that I asked him of. I ran out of the family house ashamed.

I narrated the above tale for you to understand that there is nothing too deadly about these traditions and cultures that our forefathers practiced then. African Traditional Religion and cultures are not deadly. We still need to go back to our roots.

Now we celebrate Helloween and so many things from them. We celebrate their own feelings and emotions together with our tattered self. Those masks they took from us are still in use by them, they told us that those masks are deadly but it is still in use by them. What happened in Wakanda is the true definition of what they have done to African nations.

From Enugwu to Enugu, from Oka, to Awka, we modernized everything for them to penetrate into our land. What is happening to our culture and traditional religion in Igbo land? Those shrines destroyed by these missionaries are not as deadly as the religions they brought to us. We had burnt offering in the old testament, we had people having their own shrine where they worship the gods they believe in.

With research I have carried out recently, 85% of African traditional religion are not as deadly as they termed it just as theirs which has claimed many innocent people.

WHAT HAPPENS TO OUR TRADITIONAL RELIGION AND CULTURE IN IGBO LAND?

Next post YOU DON’T GIVE UP! (a poem by Samson Iroko)