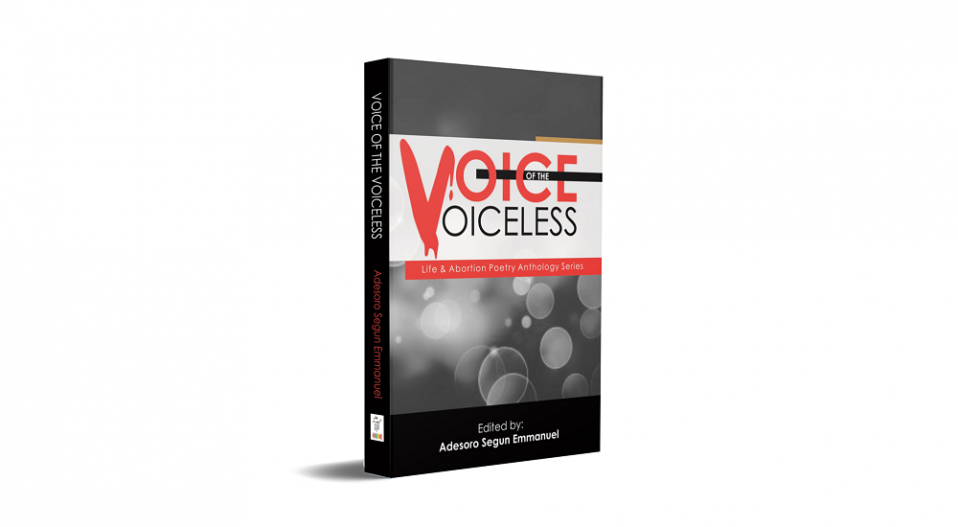 These deeply humanistic poems with soul-searching questions about life and choices offer different perspectives to abortion. I have never read a more comprehensive collection of poetry or art on a particular topic as this, and to make it more interesting each of the poems comes with its own fresh insights and unique background. While all the poems handle abortion as guilty until proven innocent they, however, have individual voices that resonate with their unique experiences, background, and style.

The voices spray across a wide network of countries and even continents. There is poetry from Nigeria, India, United Kingdom, Pakistan, Zimbabwe, and United States among others. Thus, in this single collection is a collection of imaginations and ideas that spans different cultures, traditions, space and ideology but only united by their unique backlash on the evil of abortion.

The Voice of the Voiceless appraises abortion in its philosophical, psychological, social, moral and even economic dimensions.

To some poets the poor economic factors that some women pass through predisposes them to abortion, to others it is the societal pressure that girls face of appearing as virgins prior to their marriage that makes them vie for this as an option. Still yet other poets see it as the gross action of an immoral person who is irresponsible to face the results of his/ her actions.

A recurring theme in most of the poems is the thwarted dream that is cut too short in the mother’s womb and also the stigma left undead and lurking in the mother’s conscience.

In Silas Abayomi’s poem, the image created captures the major reason behind this anthology which is to sensitize people and let them know that “Even if I am a child of circumstances /not of necessity, / spare my life;”. Prafulla Kumar Sahu’s Life and Abortion talks about the aliveness of an aborted fetus. It emphasizes that even though the fetus is flushed “like dirty water in a hospital drain from your womb” it still lives in the mother’s memories and her emotions. Thus, abortion can never be done with and dusted; it will always survive in the mother’s mind and seep into her history like a stigma or a scar on an unblemished skin. This poem is particularly creative. The poet captures the aborted fetus undead presence as not “part of your selfie screen/ Or home photo frame/ Only do I know/ How much you loved me”. The poet calls abortion “foeticide” and says the aborted fetus lives in the mother’s “cerebral womb/ Not dead”.

This is a courageous work for its effort to stand and fight for a course that many would rather not talk about.

The Voice of the Voiceless pricks the reader’s conscience and makes sure the reader views abortion as heinous as it is.

The tone of the poems are however vindictive and accusatory and backlashes all sorts of abortion without cognizance of the fact that some women have no option but to abort a fetus because of maybe the health implications it’d have for the pregnant mother. Despite the beautiful ideas and good literariness in the poems it is forgetting too soon that different people have different motives for an action.

Therefore, even though needful, the conservative campaign against abortion in this collection has left out some issues behind abortions which might be health complications, case of fetuses that might be dangerous to the mother’s health and even social reasons.

In Silas Abayomi’s Mother: Give Me this Chance to Live, it is unbelievably presumptuous and apathetic for the poet to chide the mother for aborting a fetus because of its “mystructural deformities” or even “congenital abnormalities”. The poet is forgetting too soon that a fetus has the capacity to cause the mother’s death and by extension affect the same fetus that should have been saved.

Therefore, this collection would have been more humane if, as it backlashes abortion, remember to make space to sympathize with women who have no option but to abort, women who are left between choosing the fetus and dead.

Nonetheless, this is a powerful effort and will be epic in the library of humanistic and socially conscious literature. The Voice of the Voiceless cuts across genres and geography and even customs and brings up a roundabout way of seeing abortion. Unlike popular views, this collection actually proves that even the youngest of fetuses have life and is capable of a future and life too. Thus, every reader should see one as such.

The collection is remarkably well-researched also. It contains terminologies that have medical histories with abortion. Terms like “mifepristone-RU-486”, “Methothrexate”, “Misoprostol”. And also health terms like “down syndrome”, “autism”, “personality disorder” which all contributes in giving the collection a “real” and meticulously researched atmosphere. Even though this collection is poorly edited, its message cannot be overemphasized.

The editor has a lot of questions to answer for the fair dose of ambiguity and ungrammatical incongruousness and lots of unbelievable solecisms. It needs clinical editing that will make the poems rather objective and remove the supposed morals that the poets are struggling to drill into readers.

Reading a poem that accuses of murder and bloodshed in the rawest way can be draining. Had the poems pricked at the emotions of victims and perpetrators of these dismal acts rather than accused them it would have been more relatable and drive its point home.

This collection is timely effort in a time where morals and ethical rules are allowed to flush down the sink. Even though the poems aren’t totally poetically glamorous, they, however, cut the message deep into the reader’s mind and leave him thoughtful and meditative.

This isn’t just a collection of poetry, this is a movement that needs to be heard and spread across the world. This collection will tell you something about life, about conscience and even about morals. It will tell you to reconsider what you think is “choice” and recalibrate your actions to consider even things you thought were all along harmless actions. This collection will teach you that life begins at conception and the size of a fetus doesn’t determine its humanness.

This is a courageous effort and has courageous themes and tones too from all around the world, and at least readers can relate to different worldviews and culture about life, abortion, humanity and ethics.

It is recommended for its unique themes and courageous verses.