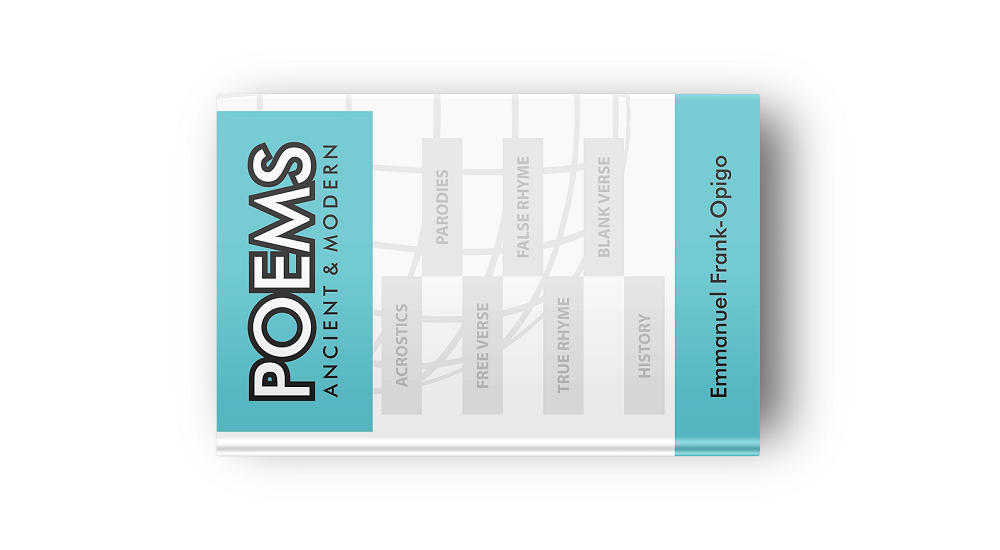 Poems Ancient & Modern is a tribute to literary heroes who have distinguished themselves over time and have influenced or have been close associates with the poet.

Poems Ancient & Modern comes in the historical direction of poet’s collection The Song of Our Father. Frank-Opigo’s poetry and writing makes you want to go back in time, research more to find your footing before delving into the soul of his poetry. His works are heavily alluding to Nigerian history and if you don’t have enough background in history you’re at risk of being left out of the discussion.

This collection firstly situates itself in the tradition of first generation Nigerian writers and poet, Chinua Achebe, Elechi Amadi, Wole Soyinka, Cyprian Ekwensi, J.P Clark, Ken Saro-Wiwa and others who have in one time or the other had contact with the poet or influenced his works. The poet reels out their names and tell us a little background, style, renowned feat or a memorable thing about them or their art. As such, the collection creeps with nostalgia, of Nigerian literature during and before and after independence. As such, this is some biography and history and oral tradition tied together in one collection.

Poems Ancient & Modern is a tribute to literary heroes who have distinguished themselves over time and have influenced or have been close associates with the poet.

Frank-Opigo’s poems are also politically conscious, digging out the history of activism and social and civil rights movements in creative ways so that unlike just a history textbook, this collection is like history told as an oral tradition by a griot. The allusions in the poem Apartheid, A Crime Against Humanity to Steve Biko, Nelson Mandela, Apartheid, Sharpeville, reverberates freshly in readers’ mind because the poet is digging this stale history and offering them to his readers and other artists for reappraisal as histories that need to be revisited and reconstructed.

Frank-Opigo’s poems are about everything and nothing, past and present, he carves a niche for himself in the way he brings back history to life. He teleports between the past and the future, so that in one poem he is talking urgent and topical issues like Covid19 and in others he is talking about the killings of Dele Giwa and Ken Saro-Wiwa.

His poetry has that Soyinka-like-feel with flowery and overblown language but he sometimes struggles to nip his theme in the bud, so that in the end the reader is left with only a thrilling and emotive feel. Nonetheless, his poems seem to be proper on their stanzas, tone, metre, rhythm and all the structures that make poetry musical. This like his other works is a good effort, and I am looking forward to reading more of Frank-Opigo’s poems and stories.

Next post WHO IS TO BLAME FOR A BADLY PUBLISHED BOOK: AUTHOR, EDITOR OR PUBLISHER?