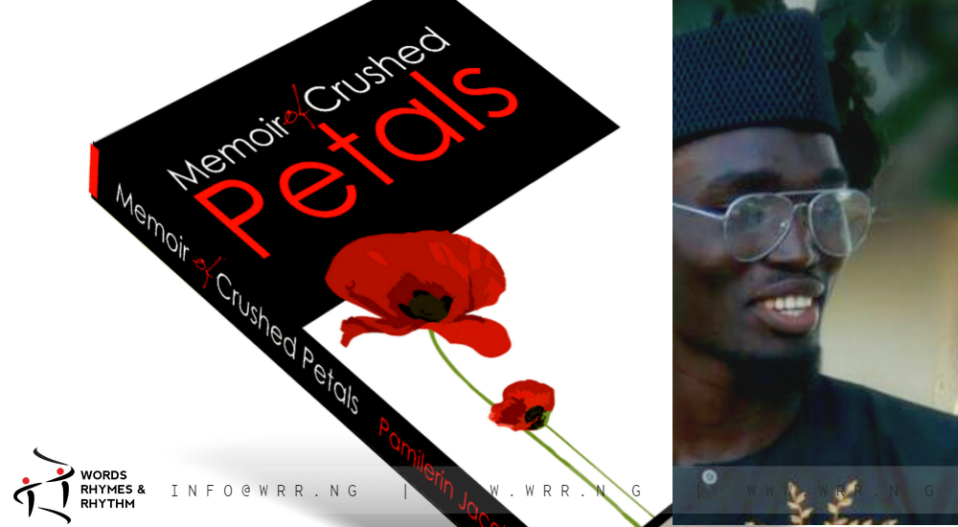 Behind this collection adorned with turgid language and scintillating artistry is the musings of a genuine poet whose poetry will definitely reverberate with echoing beauty in the reader’s mind because of the ‘literarily’ charged diction and skillful wordsmithing.

Memoir of Crushed Petals is an ambitious debut by Pamilerin Jacob which has interesting poems and ideas that the poet skillfully reconciles with his lofty words. It is charged with metaphors and literary figures which the poet had carefully and cautiously chosen to drive his inspiration home.

The collection rallies around existentialism, identity, psychological trauma, vanity, philosophy and religion among others. It has a line or two for every reader and the poet’s perception will surely enchant any reader. The poet writes on even the most trivial of ideas or objects in amusing ways; using witty aphorisms and turgid vocabularies to communicate. In the concise poem The Myth of Joy iii, the poet refers to joy as the space between his ears he will never see. This kind of alluring imagination is spread widely across the collection, exuding brilliance and mastery of language.

Even though there is a fair dose of pessimism hanging through the collection, the poet however is on a journey to find peace and satisfaction in the world. He is always facing the man in the mirror and demanding the essence of his life. In the sharp poem Schizophrenia, the poet reflexively talks back on himself, saying “some days/ the man in the mirror/ smiles at me/ he is not me”. Thus, for the poet, poetry is a means of escaping the void in his heart and the fog clogging the breath out of him. He spills out his thoughts in his poems to lighten his emotional and psychological imbalance and for therapy while basking in his delusion in On why I Write that “everyday, dead is postponed/ because/ of an unfinished poem”.

The nihilistic orientation of the poet places him in the same class with poets like Soyinka, who belief that things, everything including oneself do not exist, denial of reality and a sense of the unreality of life.  In the psychology of sadness, the poet mused “say to self, this body is alien/ these veins look like ropes/ I should tie them round my neck/ and tighten”.

The poet’s suicidal bidding portrays the ethereality of life and the futility of hope which the poet sees as “a memory ticks” in a blink then “we are left/ to stare into the eyes of our reflections/… [with] the fruits of sadness/ hiding in our bones”.

The poet employs graphic and picturesque images to comment on the fickleness of existence.

Interesting poems like the welder hints at the poet’s depressed mindset. He opens up to his inner “demons” and visits the welder to mend his broken soul. Unfortunately, he is dismissed with a scathing rejoinder thus “you smell of misfortune”. The poet confesses that “[he] is drying up/ sorrow licks [him] up/ as a cat licks milk” to expose his inner turmoil to the world and to conquer his worries; however in the poet’s signature style of intentional pessimism, [he] walk[s] away/ a river laden with faeces… wishing…”.

Memoir of Crushed Petals as the name implies is a somber poem which tells the story of a brave poet who dared expose the entrails of his worries and let his readers feel in and by extension learn from his life.

Despite the individualistic themes of the collection, the poet however has not deviated from his culture and traditions. There are mythic poems and cultural backgrounds that capture the socio-historical and spatial setting of the poems.

For the poet, the local African setting and its oral tradition is a worthy backdrop to manifest in his inspiration, and this is worthwhile.

He instills cultural artifacts, customs and tradition (especially from the Yoruba tribe) to reconcile the poems to his surroundings.

This feat the reader would find commendable for it has at least brought him/ her to her local setting and flavor. Must- read and symbolic poems like Song 0, Song V, Song IV have melodious rhythms deserves appraisal by readers. Song VI is humorous and didactic and uses a fair amount of pidgin English to amuse the reader.

In all, Pamilerin’s Memoir of Crushed Petals is an example of a successful poetry collection even though his vocabularies and perceptions seem keener than his themes and topics. The poet covers in for this flaw with his lofty language and literary acuity which he handles to his best.

The collection can be appraised and studied by religious scholars and philosophers for the wild and agnostic assertions the poet made about God and religion. The poet’s atheistic orientation leaves much to be deciphered and read.

Literary critics, especially formalists who study the aesthetic nature of a piece of art have a masterpiece for a formalistic appraisal here and will surely do justice for their refined and elevated literariness. Critics also would find Memoir of Crushed Petals amusing and worth studying. It is a collection that should be recommended for students, poets, and lovers of art.