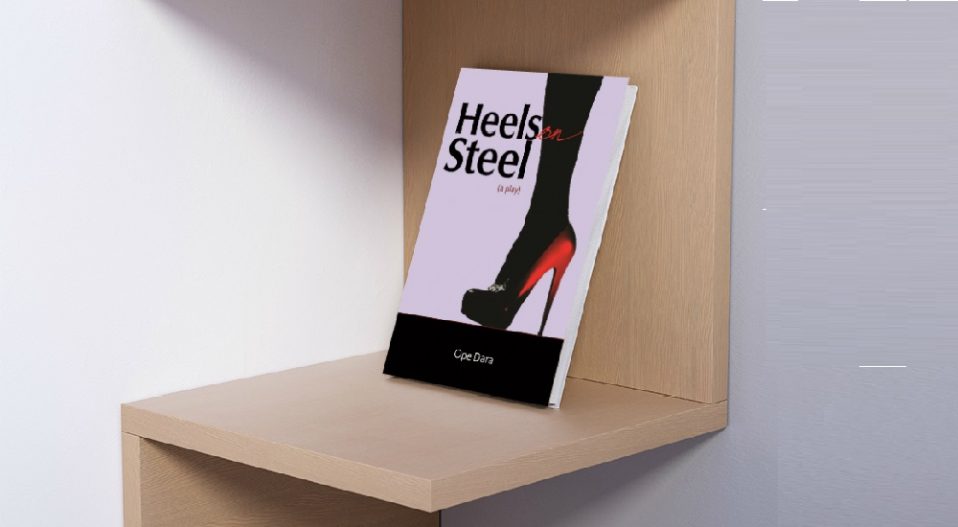 Heels on Steel is a family drama which is set in the home of Chief Adeleke, a tolerant middle-aged husband of a radical feminist. Ope Dara does justice to the theme in the drama, appraised comprehensively and finally resolved amicably in a ‘happily-ever-after’ sort of way.

Amidst the suspense and tension in the drama, the characters are fully developed so that in the end the audience becomes acquainted with the theme of the drama and ideas of the writer.

Introducing the drama with a poem by Chief Adeleke My Woman is Egalitarian heightens the tension in the drama and prepares the audience for a story charged with class conflict and tumultuous relationships.

The drama is set within a feminist backdrop, a radical kind of feminism where women like Abike are asserting vehemently that “a man and a woman are equal” and reminding women that they are “created to be equal to a man. You are not his subordinate” (12). Dara subverts fixed categories of gender and proffers that gender roles are historically and socially crafted not biologically essential.

For example, Abike the daring and rambunctious character represents the feminist who is trying to subvert her second class identity in a sexist world. She believes the gendered role of coking in the African society shouldn’t be feminized because “… we are all humans and cooking isn’t linked with the Vagina. Don’t we all eat?”

Chief Adeleke represents the tolerant patriarch who believes that even though the sexes aren’t different but at least the wife should submit to the head of the house, whereas his conservative friend Ajayi is a sexist who believes a man is and will always be above a woman and need nothing from the feminine sex save for “sex, children, and submissiveness not love” (31) and believes that if his wife talks back at him “she’s dead”.

Dara portrays these different ideologies of gender stratification and social organization to give a look at the society from different angles.

The writer delivered her points well. The play rallies around a number of topical issues, each as worthwhile and important as the other. She discusses the subversion of gender roles, patriarchy, radical feminism and the family in any African society.

Even though a linear plot, Heels on Steels touches on these different aspects in the society, and the audiences get to feel the play in whole, familiarize with the characters in their world and are finally hypnotized in suspense till the end of the play.

This play is a good effort; it has reconciled most of the dictates of drama in its three scenes and various scenes. Even though the dialogue between the characters is short and undeveloped, it has however related its theme adequately through the eventual resolution and reconciliation of the play.

The playwright makes some theoretical assertions that gender theorists and queer theorists would find interesting and at the same time sweeping. The main character Abike argues that “cooking isn’t learnt from the vagina. It’s not a genital feature of the female gender”.

Dara has added her voice to the numerous gender theorists like Judith Butler, Eve Kosofsky, Chimamanda Ngozi Adichie, Luce Irigaray among others to subvert doctrinaire essentialism and subvert fixed gender categories, thus proffering that gender identity is what we feel in the head, not between our legs. Our genitals should have no influence over the kind of sex that one is or the kind of social roles that one should play.

Heels on Steel has feminist undertones like the ones in Kate Chopin’s short story The Story of an Hour only that Dara’s Heels on Steel has a totally different breed of feminism— African feminism, which still recognizes the supremacy of the man in the house but doesn’t relegate the woman to the nether. Thus, Dara is a totally new voice calling for African feminism in more novel ways than the west has proffered.

Dara is a promising playwright, and I am willing to wager that her art will cut across boundaries, touch new realms and shift rigid essentialism. She has a flair for subverting; inverting and reconsidering popularly “held truths”. Her diction is simple, so is her style. Her themes are valuable to the society and her ability to hold the reader or audience in her thrall should be acclaimed. Thus, queer theorists and students, Gender theorists and students of gender as well. She has characters for different sort of audience in her play.

No audience or reader will leave the pages of her book or the set of her drama without relating with one or more characters in the play.

Previous post REVIEW: ‘EVEN THE RICH BEG’ IS A MOVING STORY OF PAIN AND PASSION, POVERTY AND WEALTH…
Next post REVIEW: ‘LET ME RUN MAD TODAY’ WILL NEVER BE A BORING READ FOR ANY LOVER OF POETRY, ART AND LITERATURE