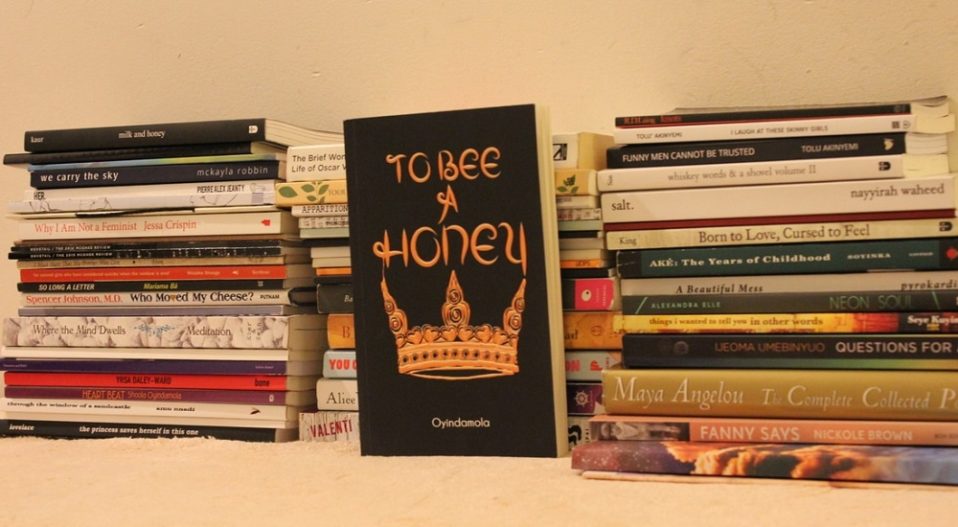 As she opens what would become a soothing performance in our heart(s) as well as a communion with the bees that lives in us, we can only wait to see what the future holds for us in Oyin’s preponderances. It is true that everyone has a spark in them, for Oyin that spark is that for sweetness.

Oyin becomes a singer of sweet tunes with the bees in her. Her voice is yet distinctive out of several other voices.

As a new migrant to the United States of America, she is faced with the stark realities of transnationalism, migration and culture shock. For me, the cover page was the magic that walked into the deepest part of my hearts as a graphic artist.

This collection to me is a mirror, one I could find myself in. In “The Taking”, Oyin hints on the recurring motifs of rape and defilement as innocence is lost with this single act. ‘This taking’ like every other taking starts with a whisper which soon modulates into a sensual touch. More so, on style, Oyin creates a suspended effect with her pause between words. She alters the conventional lexical forms of words e.g. like she did for ‘entering’ and ‘the pression’. This goes to say how much writers can achieve with style.

Although, the work appears sweetened with words of sensuality, love, affection and what have you, it is more feminine than holistic. Love becomes one of the symphonies of Oyin’s bee as she sweetens the life the woman who touches her man’s mind. Like Oyin wrote; “love a woman that touches your mind…” This is almost a request for the male counterparts. Love they say is not shy, yet the poet has chosen to tame herself from showing that she loves her subject too much…

In being a honey, Oyin should think of how to make more honey, but her desire for true love is witnessed when she says;

“I kept thinking about you,
Imagining our last kiss…”

Personification fills the collection as her subject(s) have become the sun in her earth, though without her permission. However, Oyin’s speak-back is witnessed in this poem as she calls out to men who refuse to accept a no. To me, for men, whose love for a woman is endless finds a “no” as sand in their cup of garri.

Music has always been a necessary ingredient in the writings of writers as one would find some as even players of one instrument or the other. As improvisations is also necessary if need calls for it, Oyin has decided to incorporate a line from Rihanna’s “B*tch Better Have My Money”. However for her, “B*tch Better have my honey”. This shows her creativity and makes her work contemporary and every lover of Popular culture can relate with this. In bits, Shoola’s lexis is exceptional with the word pun.ct;ua,ti?Ng. Reading those lines I can feel Shoola’s sweetness in my heart. I’m convinced her words are beyond and well poised. Such creativity is witnessed in her use of repetition of the line; “sometimes I get so busy doing nothing meaningful” while expressing how busy she was and where she plays on words with not, Nuts & Knots.

Other motifs are healing, brokenness and beauty. I thoroughly enjoyed the sweetness Oyin’s bee brought to me.

Love and womanism without doubt will yet be rekindled in the hearts of many who come across this book too. In ‘Curing’, we see a picture of relationships (singleships & marriageships if such words exist) and the hell that is let lose. Assault and molestation which are the killers of the honey in homes is being vitriolic by the narrative voice who paints the picturesque scenario. Although, the joy of feminism remains a mirage, Oyin helps women to find their honey even amidst the bitterness and noisome pestilence. There is hope that no matter what, what women should not owe themselves is worth; “this is for all the women who have had to fight this way…”

Oyin’s words are a honey comb, indeed sweet for all who thirst for sweetness too. I have no regret to say that Oyin is the bee and she is the honey…