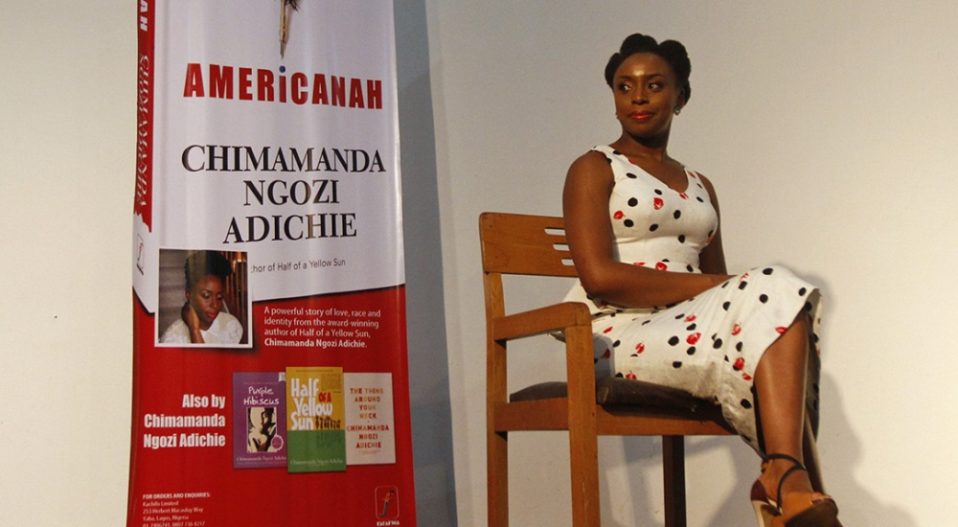 Chimamanda Ngozi Adichie is an internationally acclaimed novelist whose narratives have had a wide range of cordial reception around different parts of the world. The multicultural themes and global appeal evident in her narratives cut across a wide network of cultural, religious, social and geographical background. Americanah is one piece of literature which has managed to contain the good and bad side of different cultures and continents in a literary captivating manner.

Americanah takes the reader’s imagination on a suspense- filled ride from Nigeria in Africa to the United States and even to the United Kingdom, while still dipping him in the diverse cultural and geographical settings of the different states of the continents. Americanah is a perfect novel of identity and race in an alienated world filled with diverse racial and social segregation. Adichie’s main character Ifemelu is a narrative pawn that is use to uncover the bias social sectors and inhumane racial crimes against non- Americans in a world densely populated by ‘white’ culture and white people.

No novelist from Africa has been able to neatly capture postmodern themes in literature in its total ramifications except for Adichie whose narratives transcend a certain thematic preoccupation, culture, spatial and temporal setting in a whole. Contemporary issues of sexuality, love, gender, identity, desire and tabooed themes have been reappraised in Adiche’s novels with a total paradigmatic shift.

Americanah is an account of the diasporic African character who escapes the “ass- licking economy” (77) of African societies only to find himself in a strange world, doing all sorts of menial and degrading jobs just to survive the crude systems of America.

Americanah is a bold narrative which dared to account for the so many vile means of survival that African migrants fall into in America immediately they realize that America favors people’s skin color rather than hard work. For instance, Ifemelu and her colleagues had to go through rigorous process of looking for a job to tend their bills and “to find the real America” (119) only to realize that they can only end up as nannies, babysitters, waiters, laborers, bartenders and even prostitutes and to keep “pretend[ing] that [they] don’t notice certain things”.

Adichie’s literary style and aesthetics is seemingly grand and wholly satisfying; however she also lend a voice to the sociopolitical issues in post-independent Nigeria. She captures the various strands of corruption and moral degradation evident in the Nigerian government and society; from “the man who had sex with a top general to get an oil bloc, the military administrator whose children were fathered by somebody else, [to] the foreign prostitutes flown in weekly for the Head of States” (79)

The humor in the narrative abounds in virtually every chapter. Not mere humor but one that is pregnant with sarcastic undertones and satiric melodrama. The African students from Uganda, Kenya, Nigeria South Africa, Ghana, Tanzania, Zimbabwe and other African countries usually commune together and laugh at American systems and people. Mimicking what Americans told or ask them about Africa which reveals to the reader that these Black characters aren’t actually divorced with their African culture and tradition but still hold it high despite the ‘white’ mainstream culture. Adichie in a witty way ridicules the American culture and lampoons the America’s social systems. For example, in a bid to welcome and advise new students to the African Students Union on their arrival in Princeton University, their leader nostalgically advises them

“Please do not go to Kmart and buy twenty pairs of jeans because each costs five dollars. The jeans are not running away. They will be there tomorrow at an even more reduced price. You are now in America: do not expect to have hot food for lunch. That African taste must be abolished. When you visit the home of an American with some money, they will offer to show you their house. Forget that in your house back home, your father would throw a fit if anyone came close to his bedroom…And do not be shocked by the indiscriminate touching of American couples. Standing in line at the cafeteria, the girl will touch the boy’s arm and the boy will put his arm around her shoulder and they will rub shoulders and back and rub rub rub but please do not imitate this behavior” (139/140). Unlike Nigeria, America “has no moral compass.” (116)

Americanah would tell every reader a thing about his country and his culture. Adichie made sure she has characters from all regions of the world that come together and interact and by so doing portraying facts and fictions about their culture and society. Americanah has black characters who think “Nigeria [is] very corrupt. Worst corrupt country in Africa” (187). Europeans who think black people “never do anything right” (182) and Asians who are just too happy of not being Blacks and of being more socially accepted than the blacks and Nigerians who think other Africans are crude, loud and shiftless; Jews who think “[t]he blacks have not suffered like the Jews” (205) and all American racial minorities—“blacks, Hispanics, Asians, and Jews— all get shit from white folks, different kinds of shit, but still shit” (205)

Americanah proves that despite the utopia that America is supposedly viewed as, “tribalism is alive and well. There are four kinds— class, ideology, region, and race. First, class. Pretty easy. Rich folk and poor folk” (184). Adichie’s stunning novel stands in the same class with novels that recount racism and segregation. Chimamanda Ngozi Adichie’s Americanah does to Africans in America and the world what Barack Obama’s Dreams from my Father, Ralph Ellison’s Invincible Man and Booker T. Washington’s Up from Slavery does for African Americans. It rejuvenates them, it reconstructs history, and it emancipates and restructures the jaundice image of Blacks by Europeans as mere prejudice.

For a stranger to America, a geographical and social map can be harnessed in Americanah. Adichie takes the reader through the different nooks and crannies of America— the ghettos, rural areas, cities, towns, suburbs and communities of America. She went a step further to reconstruct the various ways of life of denizens of those areas as well as their geographical layout.

Most importantly, Adichie tirelessly proffer words and vocabularies that are considered obscure and weird in America. She figured out the ‘dos’ and ‘donts’ of English language in America. For instance, in Americanah we learn that Americans do not say “I don’t know”, instead they say “I am not sure”; they avoided direct instructions like “ask somebody upstairs” and would rather say “you might want to ask somebody upstairs”; when an unfortunate thing happens, they avoided saying “sorry” and rather say “are you okay?”; and while “boning” means angry in Nigeria, it means “sex” in America. Americans say “biracial” instead of “half caste”; and a lot of other words and terminologies that Adichie painstakingly made available in Americanah.

Americanah is educative. Adichie didn’t just narrate a story about love and race but she also instill historic lectures on race, class and social ideologies which appears around the novels just so the reader could have a background to the novel and to America’s social system. Essays which are purported to have appeared in Ifemelu’s blog which eventually becomes popular and well-read are introduced here and now in the narrative. The first essay is ‘Understanding America for the Non-American Black: What Hispanic means’, ‘American Tribalism’, ‘Why Dark- Skinned Black Women— Both American and Non- American— Love Barack Obama’, ‘To My Fellow Non- American Blacks: In America, You are Black, Baby’, ‘Obama Can Win Only if He Remains the Magic Negro’, ‘Job Vacancy in America—National Arbiter in Chief of Who is Racist’, ‘Open Thread: For All the Zipped- Up Negroes’; and other essays that talk of ethnicity and racial tension in America as well as the Black Identity in America which provides a concise background to racism and segregation in America.

Americanah is a recommended novel for all lovers of literature for two reasons, one because it is a classic and refreshingly stunning piece of art and because it is crafted by the skillful story teller Chimamanda Ngozie Adichie.

Next post OLAYINKA ABIMBOLA EGBOKHARE’S ‘DAZZLING MIRAGE’ IS OUT