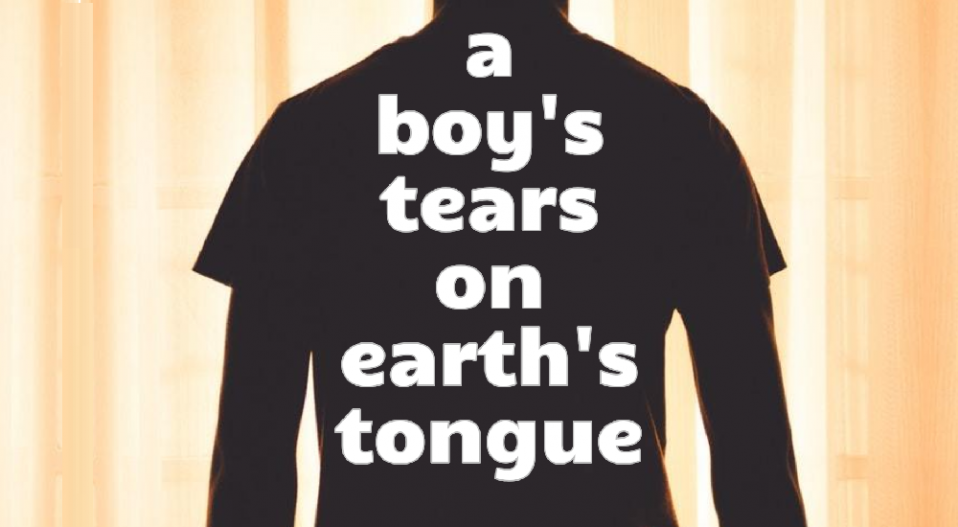 A Boy’s Tears on Earth’s Tongue is a collection of timeless poems, masterfully written by a mind that is in alignment with existential and essentialist values of human experience

A poet is more than a verbal surgeon, a conveyor of psychological malaise or a linguistic entertainer preoccupied with fixing the problems of society, expressing personal inadequacies or amusing the sensibilities of the audience. A poet is also a thinker, a molder of thoughts and actions, a creator of others in own image with the conscious ambition of imposing his individualistic conceit on society. To achieve this sublime responsibility, the ambitious poet must have undergone a robust self-development, rigorous scholarship and profound investment in research relevant to human existence.

While anyone can fiddle with sociology, psychology or anthropology, or even proffer pseudo-philosophical rants – a common feat among youngsters and trendsters, the poet under analysis is more concerned with using the lens of knowledge to influence social perception and human interaction.

In A Boy’s Tears on Earth’s Tongue, Tukur Ridwan has strived to achieve a feat very uncommon for a young man hitting his silver jubilee.

It is trendy to find many brilliant poets and writers pitch their artistic skills in the tent of monothematic issues such as gender, sexuality, social injustice, modernism, irreligiosity, depression, etc. Treating such themes are not only needful but crucial as art is used to sensitize and sensate society. However, his departure from the norm by exploring a plethora of themes – including themes aforementioned, signals that Tukur understands the power of poetry in creating cohesion in a world filled with pathological dissimilitude as well as the role of the poet in making meaning from existentialism.

Instructively too, the book’s title is suggestive that the author’s intention is deliberately inclined towards helping the reader navigate the world of his poetry through his lens. This authorial influence serves two purposes: invite the reader to see the real world through the poet’s vista and subsequently but subtly influence the reader’s behavior in interacting with the world from an enlightened perspective. It is therefore not implausible to state that Tukur is more impressionist in his poems.

In “hide & seek”, Tukur begins his reflection on the futility of man’s efforts in understanding his existence. Just few days ago, a plane crash which claimed over 150 precious lives was attributed to a systematic malfunction – a technology touted to be the icon of aviation mastery. As Tukur ponders, “while in the meantime, we keep seeking / treasures of happiness like luxury / in the shelter of limousines, waterfronts, / five star hotels, vixens & private jets”, we end up becoming “factories, making more / cosmetics of beatitude to hide inside / while we keep seeking the real bliss”. Man constantly tries to grasp an illusion by “hiding behind masks of vigor & peace”, forgetting this counsel: “look at your mirror, / you would be taught / how hard it feels to find god’s face / on the screen of heaven—“. The real danger lies, therefore, in the investment made to present a façade of fulfilment while deep down, man’s demons “dig / graveyards off our live bodies / to bury pangs of sharp impacts, / with scars to outlive us without / a dreaded sight for others to behold.”

Sometimes, however, dreaded sights are left for others in the form of depression. In recent times, suicide has been elevated to mainstream discourse as those who took their lives defied a specific clime, characteristic or class. Tukur’s approach to depression and suicidal ideation in “killing suicide” offers a realistic approach without underplaying the reality of suicide. Adopting a conversational technique, the poet engages the reader on the importance of living despite life’s “vicissitudes and vanity”. While terrible things happen, the choice to make meaning for one’s life is personal. He reasons, “man does not poke the sky’s eyes / with his soul for torrential tears, but / touches the zenith of his striving soars, / even if his wings seem to be breaking.” Therefore, the poet urges, “let us walk this road again to the market / of life, & bargain with butchers & mongers.”

An important human experience often misunderstood is sexuality. Sexuality transcends morality and religious reticence; it predates every form of civilization and perversion. Sexuality is an existential trait bestowed upon humanity. It is an expression of the divine in an intimate and a true form. Exploring religious intertextuality in “haven grave”, Tukur argues that sexual intimacy is a spiritual experience which involves a divine participation: “take me / into eternity, where the eyes / of god is a mirage drawing closer / along a vast beach / my foreskin will run back & forth / in your walls for hours & poke his eyes / & hear him scream through your moans”. A causal read of these lines would suggest a hint of sacrilege; however, a fulfilling concupiscence often bears a testimony to the name of a deity at the height of orgasmic climax. The description of the female body as the “house of god” further underscores the divine responsibility of worshipping in such sacred temple. A very significant twist in this poem is the contrast between transcendence and transience. To the poet, sex is the only human experience that transcends the vain world; as a result, continuous sex is an experience that take the lovers closer to divinity.

While the reader may get caught in the beatification of sex in “haven grave”, Tukur reminds us of another side of sex in “for those whose bodies are tales”. A subtle reference to the battle of the sexes, the poet portrays how “boys / who wear clothes bigger than their dreams” devour innocent girls while ladies with “sacred body parts” are used as bait to “prey on men’s minds & wallet”. This is a balanced rebuke of the exaggerated assault of one gender by the sanctimonious advocates of sensational ideologies.

Identity is a complex human trait. Oftentimes, it is treated as a sexual preference. However, identity is more than gender fluidity or labelling, it is about a human understanding of self despite social classification. Tukur treats identity from an eclectic perspective: as sexuality in “broken mirror”, as gender in “boyhood as a feeling” and social expectation in “woman”. The poet is fully aware a man who “needs a man to become a man / hurts in this household of men” or that he gets “hauled a stone like shaytan in mecca”; Tukur is more deliberate with approaching sexuality as something personal, with its consequential psychological and physiological impacts on the individual, especially knowing fully well that such a person “can’t go back to his placenta for redemption.” The danger of demanding conformance with established norms, does not only impact non-heterosexuals, boys who are expected to assume an identity often “bottle up death inside & call it strength”.

Self-mutilation, in order to live up to a social standard created by others, does not only glorify hypocrisy and falsehood, it has significant psychological impact on the boy-child. In “woman”, womanhood is presented as the provider of comfort to others at the expense of the woman. While this is a poem that celebrates motherhood, the poet reflects how society forces such identity on her: “like this is what puberty / teaches every girl to become / in the house, before anything / else, in the eyes of the society.” Here, Tukur is asking the reader to approach the role of femalehood from a different perspective – beyond just being “everything / creation craves for comfort”.

The discussion of identity often leads to the conflict between traditional values and modernization (perhaps, westernization should be a better term as no society is immune to modernization).

In “recollection“, Tukur decries the demise of traditional values for “tattoos, piercings & random / orgies among same sexes as a master key to ultimate liberation”. It is intriguing that the argument for globalization is evident – “because I must expand my scope / & expose to what would sweeten my tongue.” While this poem is neo-Africanist, the position of this poet is not one which calls for an outright disavowal of western values, especially knowing fully well that some of the custodians of heritage prefer the new world seen on the TV; the poet is calling for a balance between African and western influence without the nihilation of the African way of life.

The importance of balance is presented in “inheritance”: “a youth must learn the ancient art / before skin turns to scales” so as to “learn how to swim this tide called life”. A people without their own values are left at the mercy of a world that is becoming increasingly nationalist and racial supremacist.

Tukur’s understanding of human life is felt in a dirge written to protest a system that favours status above justice. The death of Ochanya, a thirteen-year-old girl whose death was attributed to a sinister father-son persistent rape, becomes an x-ray used to unveil how the system is designed to keep the underprivileged perpetually under. The poem, engaging and provoking, creates a vexation against the perpetrators of the this unpardonable evil and the system that protects them. In the “joy of nationhood”, Tukur details how the system has become a theatre that “tells tragic tales— / sorrow claims the plots of nights” while there is no hope of a desired future: “they expect us to make peace with a morrow / that they haven’t impregnated the day with.” The just concluded Nigerian elections strongly affirm how political leaders have no regard for the future but the continuance of self-preservation.

Tukur has made significant effort to touch on different themes in this collection. While the intent is to proffer his thoughts on issues that affect humanity, such as religion, sexuality, depression, individuality vs social conformity, love, identity, social injustice and political machination, this collection is not a book of philosophy. Rather, it contains intellect-stimulating poems, masterfully crafted to capture existential nuances that define our collective humanity.

The mastery with which language is used in this collection has deservedly positioned Tukur as a poet of worth and stature. He attends to his themes with such precision that the reader connects with each poem without unwarranted authorial influence. Perhaps, the greatest gift Tukur has given the world is not just that the poems offer a fresh perspective on dealing with the life’s complex spectra, it is more of the generosity of the poet to guide the reader to see the world from an individualist-universalist perspective, more akin to ethical relativism. The reader becomes aware that he or she is part of the range of frequencies and must embrace the diversity of human experiences without losing oneself.

A Boy’s Tears on Earth’s Tongue is a collection of timeless poems, masterfully written by a mind that is in alignment with existential and essentialist values of human experience – there is a poem that directly engages the reader in a most intimate way!

Previous post EZENWA-OHAETO REACHED A HEIGHT OF HONESTY, PASSION AND VULNERABILITY IN ‘I BURN INCENSES BEFORE SLEEP’: A REVIEW OF EOPP 2018 WINNING POEM BY OYINDAMOLA SHOOLA