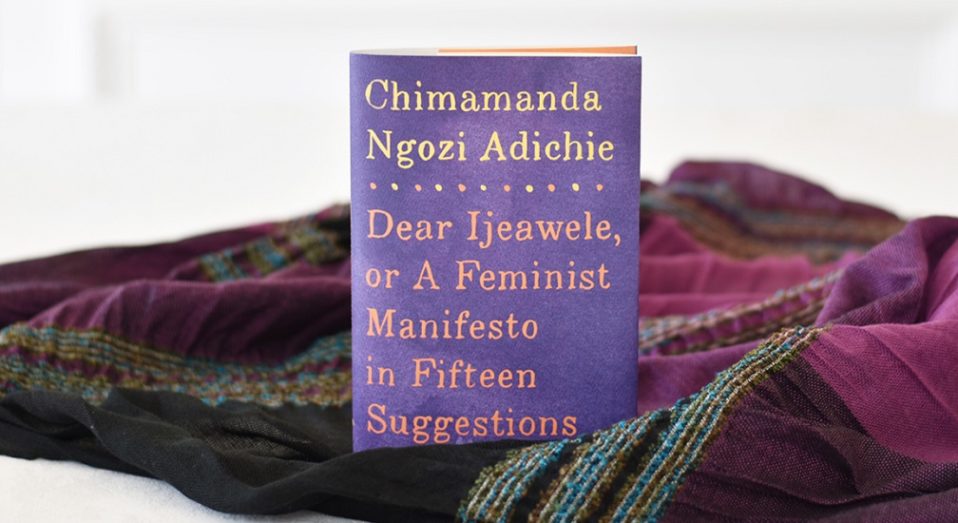 This is a feminist book about marriage, parenthood and how to raise a female child. Chimamanda makes it clear that there is no argument, no ‘ifs’ or ‘buts’ to what a female should want for herself as a feminist.

She says, “I matter equally. Full stop.” She also clarifies that there is no such thing as being a partial feminist. It is either you are a feminist or not.

One important advice that she starts the book with is to her friend, that she should see herself as a “full person” not only as a mother or a wife. This suggestion is powerful because it expands women’s possibilities of achievement in diverse forms.

When you see yourself as a “full person,” you can be a business woman, a president, a writer, a wife… and marriage or child bearing and rearing should not limit your perception of yourself. With this statement, every part of a woman’s existence, achievements, and goals matter.

Chimamanda proceeds to diminish the idea of gender roles in marriage and how society has taught females to think that a man in the house is doing them a favor by performing tasks like taking care of his own baby or cleaning the house or even cooking.

She states that as a husband a man is not “helping” his wife to take care of the children. He is simply taking care of the children because they are his too. The statement “helping your/my wife” suggests that a certain role is for women to do. Therefore, it is perceived as if the husband is doing a favor by performing the task that he will eventually benefit from. That statement may be right if it were a friend who is not obligated to perform the task.

My best line in this publication is on page 15, where she says:

“The knowledge of cooking does not come pre-installed in the vagina.”

Many of our roles are learned. Men and young male children should learn how to cook because they need such skills to feed and cater for others when the need arises. We should not make young girls stay in the kitchen because the need to learn how to cook for their future husbands but because learning to cook is essential to good living.

Referring to the topic of names and marital identity, Chimamanda mentions Hillary Clinton and her twitter account, she mentioned how the description starts with “wife” compared to her Bill Clinton’s page that starts with a profession experience.

Chimamanda also discusses why she refused to take her husband’s surname and why she uses the prefix Ms. rather than Mrs. I find her opinion quite reasonable because the consequence of accepting a husband’s surname can be stressful. One must change names on bank cards, on passport, on Id cards etc. after choosing her husband’s name. Chimamanda suggests that the couple could pick a new surname, so that they can experience and know the joys of the stress that comes with it, together.

The suggestions in this book intend to inspire knowledge of the issues that connect to feminism besides combating sexism. Other topics discussed in this book include hair, sports, and career fields for female children.

The book is awesome and I enjoyed every bit of it! I feel that ‘DEAR IJEAWELE’ is an account and justification of my rebellion as a feminist-child to many ideals and expectations in the communities where I have lived.

SHOOLA OYINDAMOLA was born and raised in Ibadan, Nigeria. She is a published poet, a feminist, a mentor, a blogger and Co-founder and Resource manager of Sprinng Literary Movement. She loves to writes poems, essays and her non-classifiable opinions. She uses her writing skills with her feminist drive to discuss the gender injustices that need to be fixed. She has authored two collection of poems titled ‘Heartbeat‘ and ‘To Bee A Honey’.

Next post OF UNHEARD VOICES AND REALITIES: a review of Shoola Oyindamola’s HEARTBEAT by Tola Ijalusi