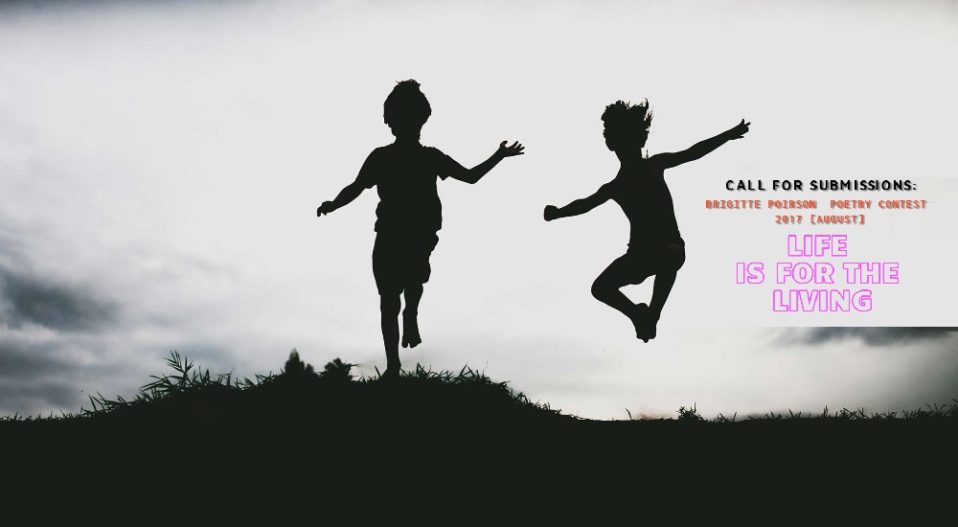 Words Rhymes & Rhythm (WRR) is now receiving entries for the  August edition of the BRIGITTE POIRSON POETRY CONTEST (BPPC) SEASON III, 2017. Poets from Nigeria, Africa and all over the world are hereby invited to submit their poems on the theme: LIFE IS FOR THE LIVING.

“To live is the rarest thing in the world. Most people exist, that is all.” — Oscar Wilde.

“Living is doing reckless things – doing things you’ve always wanted to do – fulfilling your dreams, chasing them and doing whatever it takes to catch them. Existing on the other hand, is merely breathing and doing the daily chores. I personally feel that the biggest difference in living and existing is the amount of control you have on your life, on your emotions.” — Unknown

“Living is understanding that we only get one shot at life, so we had better make the most of it, existing procrastinates, hesitates and squanders the opportunity to make a difference.” —  Better Life Coaching Blog

“To live is to enjoy life, experience the beauty around us, be happy, live happily, smile, laugh, be yourself and love. To exist, you simply follow the actions, like a robot. You are here physically, but your not living, you do what you have to do to get through the day.” — Unknown

Someone who exists lets emotions such as fear and anger dictate what they can and can’t do — like a long survival, a process where you breath and you survive while the individual who chooses to live explores and understands life’s emotions and actively makes efforts to tame them so they do not interfere with his/her life decisions.

Participating poets are expected to explore the concept of living a full life, as opposed to just existing. They should explore the questions: What does it mean to live? Does it mean simply to exist? Is there a difference? Do people live their lives to the fullest of their potentials? Are people restricted, by self of society, from living, constricted to just existing?

We therefore invite poets from all over the world to submit well-worded poems the theme: LIFE IS FOR THE LIVING. Judges will be focused on ORIGINALITY, adherence to THEME, CREATIVITY and the poet’s’ use of LITERARY DEVICES  in the poems.

The July 2017 edition was one by Aire Joshua Omotayo, a 21-year-old programmer, campus journalist and writer studying at the University of Ibadan, Ibadan, Oyo State.

3 thoughts on “CALL FOR SUBMISSIONS: BRIGITTE POIRSON POETRY CONTEST 2017 [AUGUST] ‘LIFE IS FOR THE LIVING’”