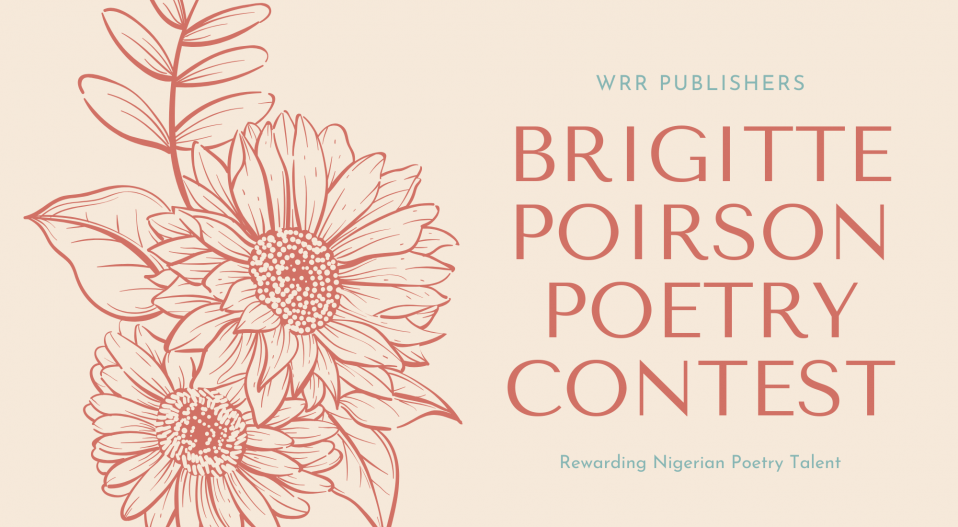 The BRIGITTE POIRSON POETRY CONTEST is a writing contest aimed at rewarding the under-appreciated talent of young Nigerian poets. It was instituted in February 2015 in honour of Brigitte Poirson, a French poet and lecturer, editor, who has over the years worked assiduously to promote and support African poetry.

BPPC one of the few credible contests in Nigeria, and one of country’s most popular, especially among the younger generation of poets. The vision of the BPPC is to provide the required drive to make them take the art of poetry more seriously. Many past winners of the contest have gone on to win national and international awards.

The monthly finalists’ poems are published in a chapbook made available for free download online while the top 10 poems of each month are published in the annual BPPC anthology and distributed free at the Words Rhymes & Rhythm Publishers Literary Festival, Feast of Words, annually.

*BPPC became a bi-monthly contest with three winners per edition in 2020.

Brigitte Poirson is a French poet, editor, educationist and literay promoter who has over the years worked assiduously to support of African poetry in various capacities. Brigitte has taught languages ​​in high schools and universities in France and England. She has authored eight books: La Nouvelle Vouivre, 1977; Étamine des Jours, 1978; In Worms and Against All, 1979; The Passion Fruits, 1984; Poems from the Free County, 1995; The Ten-Year-War, 1996; Jurassically Yours, 2009; Clair – Obscur Encounters: A Poetic Duet Leading to Self – Discovery, 2015 (co-authored with  T. Haynes); Surviving CORONAtion Street, 2018; and edited or co-edited several others.

Brigitte’s secondary schooling was carried out at the Dole Ursulines in Franche-Comté. She then completed a course for the ENS, before graduating in languages from Dijon University and becoming a qualified high-school teacher for baccalauréat students in France. She occasionally engaged in part-time lecturing activities with her local Chamber of Commerce.

She devoted a few years to lecturing at High Wycombe College of Technology and Art, then at Plymouth and Exeter Universities (for degree courses ranging from civil engineering to maritime studies, Law or Sociology…) in England. Back in France, she added becoming a prison visitor and a probation officer attached to the local court to her experience, both as a commitment and a way to sharpen her understanding of the social problems all educators face daily. In terms of her writing, Brigitte Poirson’s publications range from poetry to theatre and fiction, composed in French and English, and published in Paris (éd St Germain-des-Prés), New-York and Britain. She has also contributed to numerous anthologies and magazines, has won many awards and has been a member of the Société des Gens de Lettres de France. She currently devotes time to promoting African literature.

Brigitte founded and curated the Via Grapevine Series published in South Africa with Phinithi Ntelekoa to encourage budding authors, and is a member of Words Rhymes & Rhythm Publishers Limited, a foremost Nigerian publishing and educational institution. She is a patron of the Brigitte Poirson Poetry Contest (BPPC) and the Albert Jungers Poetry Prize (AJPP) two of the most prestigious literay prizes rewarding young poetry talents in Nigeria. In France she regularly organises small literary workshops with young poets.

Believing that literature can be used for social reorientation and development, Brigitte is currently battling red-tape in the way of setting up a France-Nigeria  Literary Arts Residency  and exchange programme for young Nigerian writers in partnership with Words Rhymes & Rhythm Publishers.